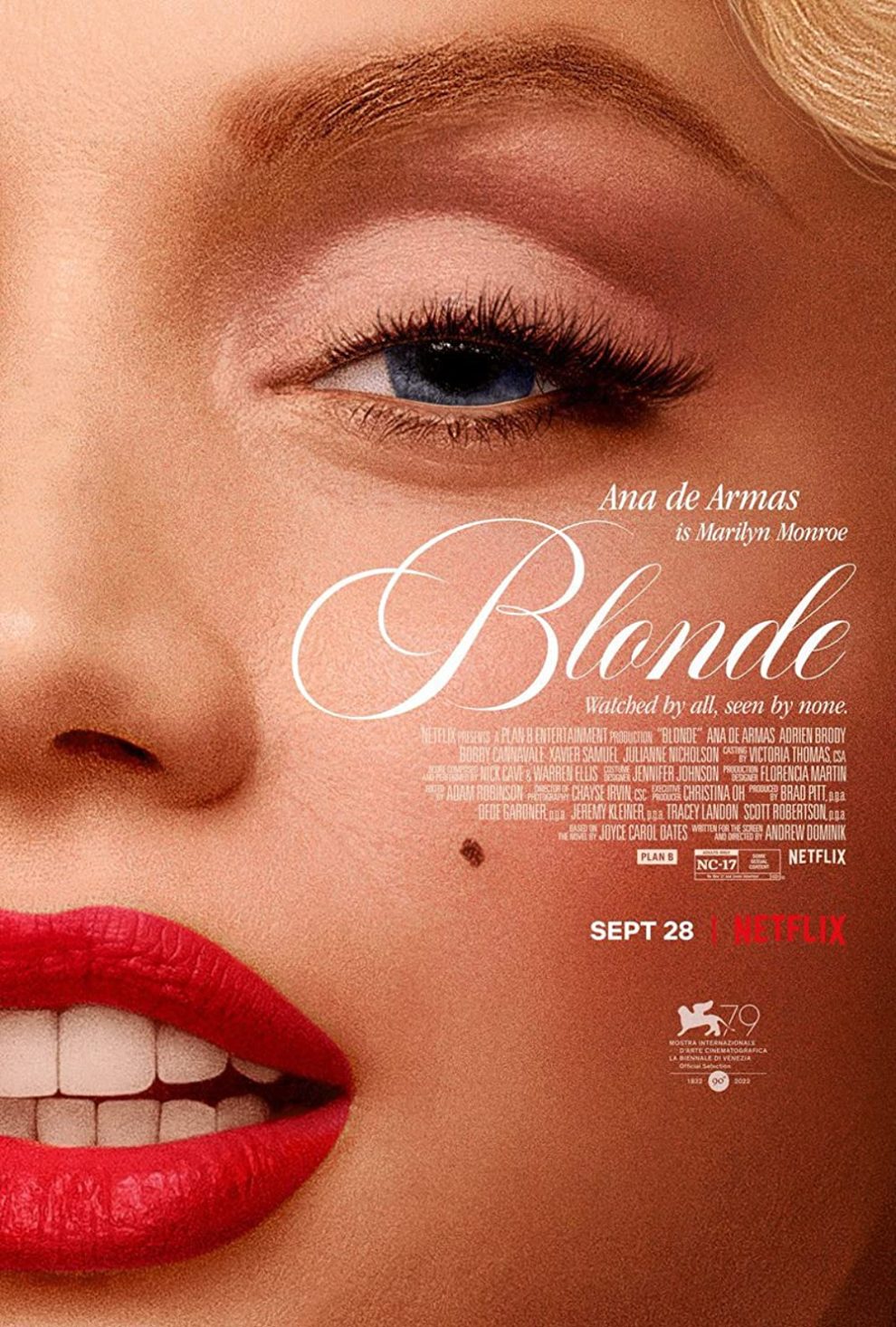 “Blonde” chronicles, in varying truths, the addiction and sex life of Marilyn Monroe. The film opened with her humble beginnings as a fatherless daughter to a mentally ill mother. In a rage, Marilyn’s mother tries to first kill both of them, and then kill Marilyn. She loses custody and Marilyn is sent to an orphanage. It fast-forwards to a graphic scene of Marilyn getting assaulted and thereby landing a role in a movie. The movie continues to document all of her big career moments and various marriages and shows Marilyn slowly spiraling into addiction and eventually ending her life.

Marilyn is depicted as a stupid, incompetent wannabe actress and her only asset being her appearance. During the time that Marilyn was in an obviously predatory polygamous relationship, one of her partners insinuated that Marilyn’s sexual prowess was due to her not having a father in her life. Throughout the movie Marilyn referred to her husbands as daddy, which is true, but to me this whole thing feels like a dangerous and harmful precedent to set. Again, I understand that this movie’s NC-17 rating is there for a reason, but as someone who meets the criteria to watch it, I still left feeling sick to my stomach.

Another really big issue I took with “Blonde” were the depictions of her two abortions. Historian and author Michelle Vogel stated that there is no evidence that Marilyn Monroe had an abortion, let alone the number and circumstance of each one. Neither of the abortions in the movie were Marilyn’s choice and throughout the movie she had no control of her body, no matter how hard she fought. The only time I felt Marilyn was empowered or had any agency during this movie was when she was talking about her dream of moving to NYC to pursue theater acting and when she killed herself.

I will not go into detail about the scenes and circumstances surrounding Marilyn’s abortions in this film as I do not find it helpful. However, I will say that neither of them were her choice. Planned Parenthood’s national director of arts and entertainment engagement, Caren Spruch, in an interview with Hollywood Reporter, called the movie “anti-abortion propaganda” and in a post Roe v. Wade America, I cannot agree more. The abortion scenes villanized abortion in countless ways, but especially when a CGI fetus was begging Marilyn not do to it what she did the last one. I thought these scenes made this movie one of the most destructive of the year. Especially given that these abortions are all just speculation.

Andrew Dominik’s “Blonde” fetishizes female suffering to an extent that I consider to be negligent and detrimental, and has the ability to leave a lasting negative impact on viewers. The only thing this movie got right was the numbness and hurt synonymous with womanhood.