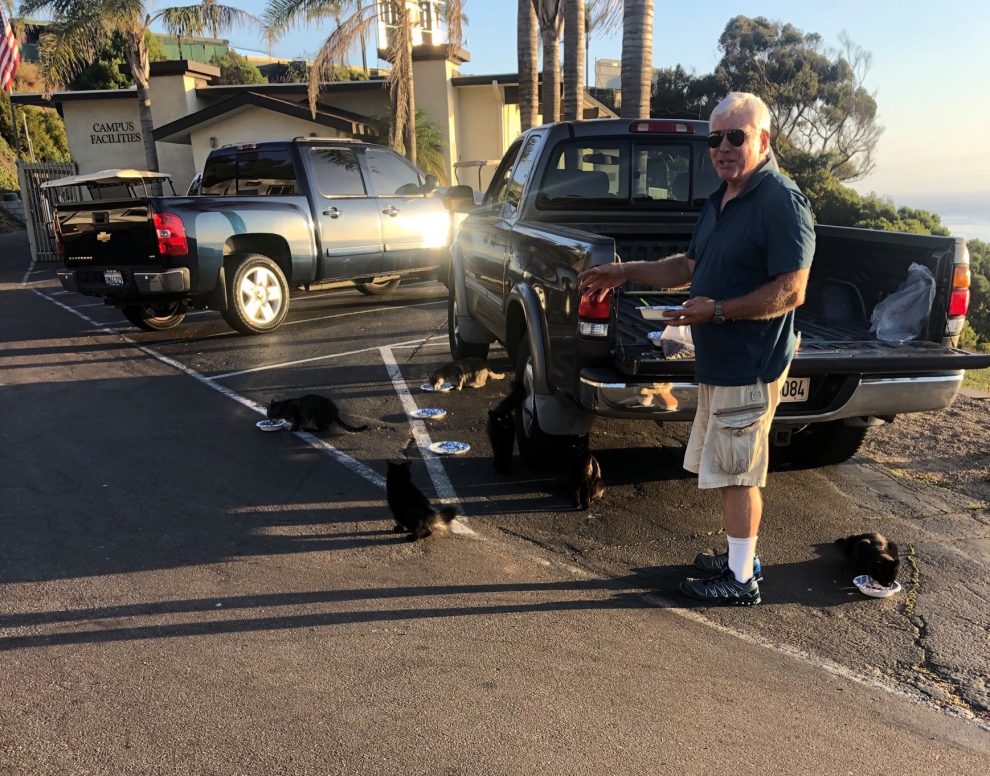 Meet Jim Gaupsas, a true humanitarian… well, cattarian. If you happen to walk down Lomaland Drive past the Facilities Department at 6 p.m. any night of the week, you’ll probably see Gaupsas standing in the parking lot surrounded by 15 cats.

Jim and his wife, Jackie Gaupsas, are longtime Point Loma locals and cat lovers. About two years ago, they were taking a walk around campus during Christmas time and realized that no one was available to watch over the cats. Since then the couple has devoted their time and money into taking care of this loma litter.

The first step is feeding. Gaupsas first set up a feeding station in the middle of the campus below the gym, and the cats started coming. Gaupsas began building his relationship with them. According to Neighborhood Cats, most feral cats do depend on people to survive. They can’t sustain in wildlife completely on their own and often rely on caretakers for food, which helps better manage the colony.

“We only do one meal a day, so they can still hunt a bit,” Gaupsas says.

Gaupsas endearingly calls the female cats “little girls” and proudly talks to them like a grandpa would talk about his grandkids. To any passerby, he’ll introduce you to Gotee, the friendliest of the bunch. Gaupsas also names the majority of the cats. Among his favorite names are Hana, Dino, Frankie and Sunny.

Sunny is the momma cat to most of the cats here on campus. While she is still able to give birth, all the other cats have been spayed or neutered. According to PETA, not many feral kittens survive, and the mother cat shouldn’t be feeding and pregnant at the same time.

Gaupsas regularly takes the cats to the vet.

“I learned about trapping from a guy at East County Animal Rescue,” Gaupsas said. “So I trap them and make sure they have all their shots, most importantly rabies. It’s like the traps in Road Runner.”

Feral cats do not often die of old age. Rather, they die of starvation or minor injuries and diseases that are left untreated. Recently, Gaupsas noticed one of the “little girls” had been limping around the parking lot. He immediately took her to the vet to confirm the broken leg. Afterward, Gaupsas took her home with him, and for 10 weeks he watched over her in her pink cast.

Most of the cats wandering around are Chocolate Lynx Points cats, which is a mix between a Tabby and Siamese cat. Each cat has their own personality and dynamic within the colony. Gotee and another black cat named Bob have been around for at least 20 years —  long before the new science building — and remain on campus as constant furry faces.

Like other Loma creatures, the cats are a happy addition to the community. For the students, Gaupsas has a few public service announcements.

“It would be nice if there was some sort of tracking for new cats or litters,” Gaupsas said. “People can tell the people at Facilities Department. Or if somehow people wanted to pitch in a dollar for food that would certainly help.”

He also asks drivers to drive slowly on the road down to the cliffs, especially during the evening feeding time.

“One little guy, Duke, got hit by a car,” Gaupsas said. “He was a handsome boy.”

As students, we are grateful to kind folk like the Gaupsas’ who joyfully love on the cats. If you ever find yourself having a hard day, walk down to see Jim and Gotee. They are likely to put a smile on your face and make you think more paw-sitively.