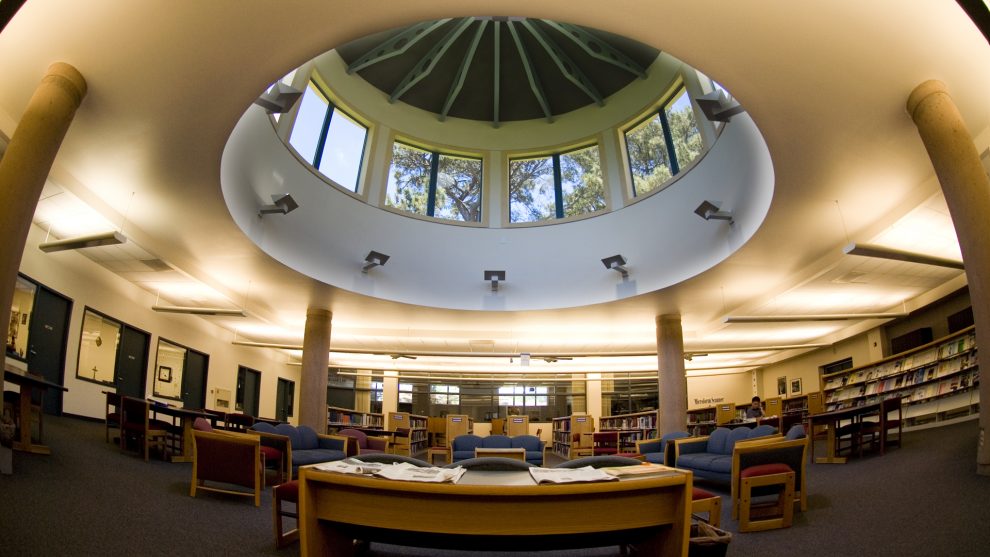 In November 2020, thousands of mail-in ballots made their way to ballot drop-off locations as Election Day approached. The large number of mail-in ballots is a side effect of COVID-19 both for voters in San Diego County and across the U.S. According to the San Diego County Registrar of Voters, the county had a voter turnout of 83.5% in the 2020 presidential election, and more than seven times the number of voters mailed in their ballots rather than visited the polls.

In past years, libraries had voter registration forms and educational materials available to the public. However, accessibility to these resources this year was different due to COVID-19. Amid a politically divided nation and a worldwide pandemic, did libraries have a real impact in facilitating the 2020 election? How did PLNU’s Ryan Library make a difference during election season?

Miesner said, “Anecdotally, the volume [of ballots collected at the libraries] was much higher this year due to several factors including the pandemic, the increased [number] of locations and the extended period in which mail ballot drop-off was available.”

According to a mail ballot drop-off survey released by the county, San Diego libraries made up 70% of the drop-off ballots received in the county.

When asked whether the library will participate in ballot collection for future elections, Miesner said, “We expect to continue to assist with this civic process in the future in cooperation with the ROV (Registrar of Voters).”

Data from the Mail Drop Off Program from the Coronado Public Library showed that during Oct. 5 to Nov. 3, there was an overall increase in ballots dropped off across the library branches in San Diego County. During this time period, there were only five days in which the number of ballots received was less than 1,000. The same data shows the San Diego Registrar of Voters received the most ballots dropped off at their location with 98,657 ballots. Second to the registrar was the Carlsbad Dove Library with 21,364 ballots received.

The manner in which Ryan Library assists in the election differs from county libraries. Denise Nelson, director of PLNU’s Ryan Library, said, “The reality is that our library facility closure kept us from having a very active role in the 2020 election.”

“PLNU’s library hasn’t been a distribution point for printed election materials for several years,” Nelson added. “With so many of our students voting by mail for their home address and with the parking challenges that make it challenging for members of the larger community to stop by the campus to pick up voting materials, we’ve been directing members of the campus community and the broader Point Loma community to the San Diego Registrar of Voters and the California Secretary of State for sample ballots, voter information guides, and other resources.”

The website for the American Library Association (ALA) states, “As institutions that provide access to information, resources, programs and public spaces for all members of a community, libraries are a cornerstone for civic engagement and more important than ever.”

Although libraries are free of politics aside from political literature, the ALA website also states, “Libraries are nonpartisan, but they are not indifferent.”

According to Nelson, Ryan Library will take future actions to help with voter education.

“We provide books, journals and other resources that cover everything from biographies to political history and theory to current social issues,” she said. “All of those topics are relevant in understanding our political process, our history, and the many ways we build and navigate our society together.”