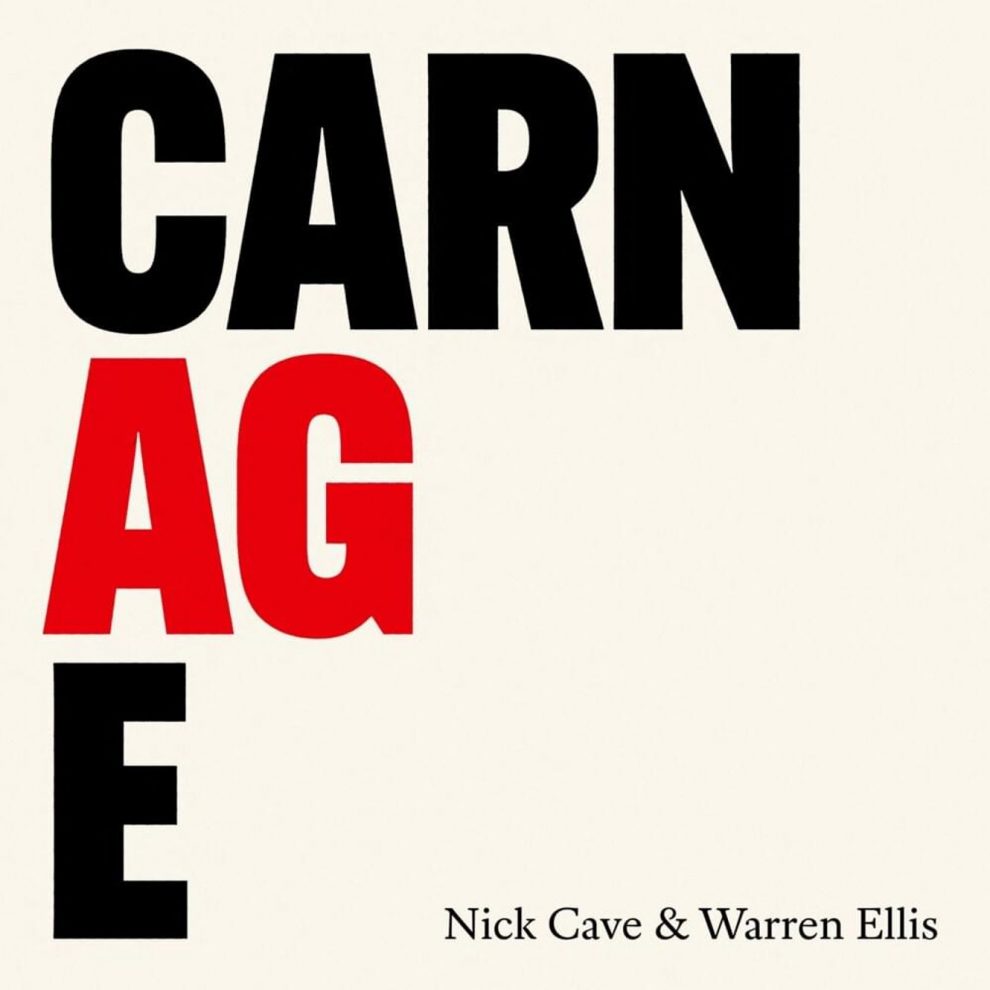 On the heels of their latest collaboration “Ghosteen,” Nick Cave and Warren Ellis of the band Nick Cave & The Bad Seeds released a new collaboration titled “Carnage.” “Carnage” sounds like an evolution of “Ghosteen,” expanding on its restrained minimalistic sound but differing with more eclectic and diverging sounds. While in many respects “Carnage” feels like a sequel to “Ghosteen” with its ambient sound and steady synths in the background flowing seamlessly from one to the next and only ever interrupted by Cave’s solemn spoken-word vocal delivery, “Carnage” is staggeringly different. Cave and Ellis exemplify a very eclectic and diverse collection of songs that both demonstrate their creative pallet and how successful they are at executing it.

Tastefully, the opener “Hand of God” doesn’t give away its hand so quickly. The song sounds the most like Cave and Ellis’ previous work — the ambient undertones of a small string ensemble build on top of each other and Cave sings a story about his despair in a godless world. It’s in the title track “Carnage” that the sound and tone of the album begins to drastically change. Cave laments the endless cycle of love followed by sorrow he can’t seem to escape from: “I always seem to be saying goodbye / And rolling through the mountains like a train…. And it’s only love with a little bit of rain / And I hope to see you again.” He delivers those last two lines with a resonance and throatiness reminiscent of a rock power ballad, like what Bruce Springsteen did on albums “Born To Run” and “The River.”

Cave repeats a lot of his regular themes and motifs, jumping between his faith and emotional brooding. However, some of the songs are explicitly influenced by the dynamic events over last summer and amid the pandemic. “White Hunter” is an allegory of the events surrounding George Floyd, with the narrator of the song acting as an elephant hunter threatening to shoot the listener in the face in a haunting tone and tying in familiar phrases associated with the Black Lives Matter movement such as “I can’t breathe” and invoking scenes of protests. The intensity of the subject and his language comes to an interesting climax when the song devolves into something reminiscent of a pub chant. The tonal differences and clashing musical choices give this song a lot of character and demand several listens to fully absorb but it sounds incredibly potent and creative.

“White Elephant” is followed by love letters to his wife. “Albuquerque” and “Shattered Ground” are two songs that compare and contrast how trapped he feels with his wife at home and being unable to provide for her physically and emotionally as they deal with hardship. The two tracks are separated by a slow diary-like orchestral piece, “Lavender Fields” and, while I feel like this track was a little dull and unnecessary, it is pretty. The closing track “Balcony Man” covers practically every theme introduced on the album and ties everything up in a nice little cathartic bow.

Unlike “Ghosteen,” the instrumentals on this project employ a stronger use of percussion, varying between the drum set and a pit orchestra. The percussion is used to create trance-like rhythms that accent the ambient tone and give the songs a lot more propulsive energy. In addition to the inclusion of more percussion, Cave and Ellis often shift song style from piano ballads to post-punk compositions to occasional parade chants and beneath it all, a piercing performance of spoken word and impassioned refrains.

Even for a Nick Cave project, “Carnage” sounds and feels intensely and genuinely inspired. The themes remain consistent from beginning to end regardless of how much the music genre jumps, and the performances feel alive, vigorous and passionate. Nick Cave has been making music for more than 20 years now and yet this release might be my favorite of 2021 so far. It’s encouraging to see an artist who can continue to improve their craft over such a long career and “Carnage” delivers an expectation that Cave and Ellis will continue this string of exciting and creative projects.