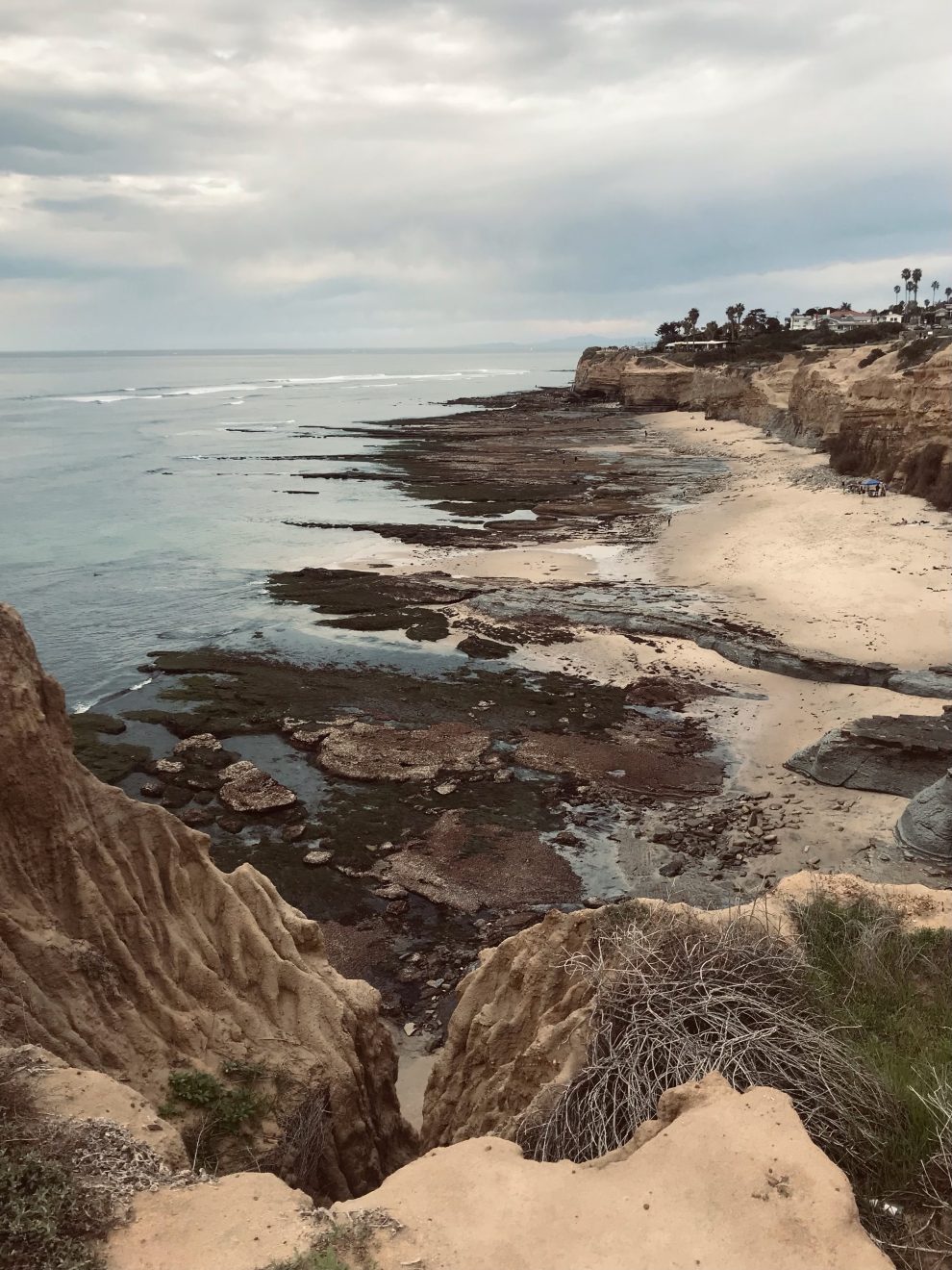 If you have been to Sunset Cliffs these past few weeks you may have noticed a shift in scenery. Instead of a narrow strip of seaweed-strewn beach closely bordered by cliff and wave, there were wide swaths of craggy rocks and long trailings of fine seagrass, creating an expanse of tide pools.

The beaches were doubled in size, giving the chance to explore what would normally be hidden underwater. This ecosystem where land and sea unite is known as the rocky intertidal and is home to a plethora of extraordinary marine life that, at a higher tide, would be left unseen.

Walter Cho, professor of marine biology at Point Loma Nazarene University, described the cause of tides as the interactions of gravitational forces from the sun and the moon pulling bulges of earth’s vast amounts of water, and the earth rotating into and out of these bulges. Low tides occur when we are out of the bulges, and the strength of the tide varies depending on the kind of moon we have and how the earth, sun and moon align.

The tides reached as low as -1.9 at Sunset Cliffs on the last Monday of January, uncovering a biome rich in many forms of marine life, from seaweeds such as the aptly-named dead man’s fingers, to the tiny and colorful ringed top snail.

Mike Mooring, PLNU professor of biology, explained that the tide pools are a distinctive ecosystem in the way they are in between space with land on one side and sea on the other.

“It’s really a unique situation where the organisms that are able to thrive there have to be able to live underwater for a period of time, but also endure desiccation from the sun and the winds,” he said. “There’s a lot going on, it’s just for the most part it’s not real obvious to us because it’s either happening in very slow motion, with very small animals or happening underwater where we can’t see,” Mooring said.

The tide pools are a remarkable hidden world of discoveries waiting to be made. Mussels and barnacles fuse themselves to rock faces while crabs, crumb of bread sponges and octopuses hide in pools or beneath overhanging rocks to keep out of the sun, waiting for the tide’s return.

You might even find the alien-like sea hare, a gastropod mollusk of gelatinous substance that lives in shallow water, dining on algae and seagrass.

Or, if you’re particularly lucky, a sea star. Sea stars are, unfortunately, a rarity these days due to a wasting disease that drastically lowered their numbers, but if you look hard enough you may find a bat star or brittle star hidden in the crevasses of the rocks. Crabs are common, either smaller sharp-nosed crabs or shore crabs, as well as the larger Dungeness crab.

Mooring suggested bringing a guide book so you know what you’re looking at, and also stressed it is important to be respectful of the animals and not collect them. One of the reasons abalone is rarely seen is because of over harvesting. Even moving animals can be detrimental to their health, as many are territorial and won’t survive being relocated.

“To people, [tide pools] represent that barrier between where we live and the ocean coming in and taking over,” said Mooring. “And so with sea levels rising in many parts of the world, with erosion either from the land or from the ocean, it’s kind of this critical intermediary area.”

The next predicted negative tide will occur February 16 in the late afternoon. Anyone who wishes to explore the rocky intertidal at low tide can do so down at our own Sunset Cliffs. The tide pools at Cabrillo National Monument are also a good place to look for wildlife, as they are part of a protected area and have certain restrictions that allow for more biodiversity to thrive without being impacted by an overabundance of humans.

Meghan Coley, third-year writing major, went to the tide pools at Sunset Cliffs for her biology lab at the peak of the low tide.

“I wasn’t expecting to find as much as we did…it shows how much life there is in that ecosystem and that little area of our beach,” she said. “It was just really fun to walk around and explore, and just be in nature. It was very calming at the same time.”

“[It] really felt like an opportunity to be completely surrounded by God’s creation for a little while, which was a really cool experience,” she said.

Low tides offer a delightful opportunity to go treasure-hunting for all manner of strange, slimy and colorful marine life forms. Both Cho and Mooring advise, however, to be careful, as the algae-coated rocks can be slippery, and many types of organisms can bite.

“I think we are in such a fortunate location where we can easily access the tide pools,” said Cho. “Be curious. Explore. But be gentle as you handle the organisms.”