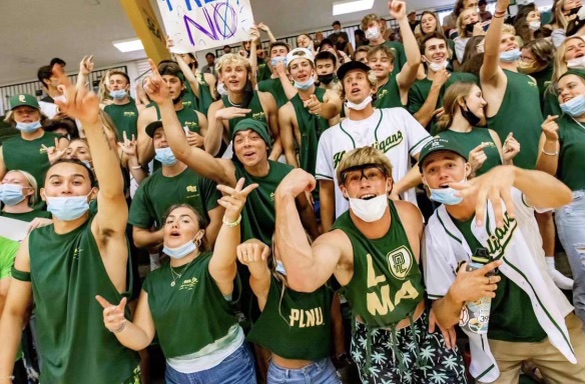 Point Loma Nazarene University’s Men’s Basketball team had a fast start to the season and are heating up once again on a seven game win streak.

Third-year Business Administration major, Kaden Anderson, and fourth-year Psychology/ Organizational Leadership major, Myles Franklin have been major factors in the success of the team averaging a combined 30.9 points per game.

Franklin was also just named the Sea Lion MVP of the week after the win against Fresno Pacific University.

Another factor in the success of the team is the support they receive from fans. PLNU’s designated hype team, the Green Sea, goes to all of the university’s sporting events and has supported the Sea Lions this whole season.

Second year nursing major Kyler Kroll gave his inside perspective as a member of the Green Sea.

“My favorite part about being a hype man for the Green Sea is how much fun it is to cheer at games. You can always count on seeing me at the front going crazy,” Kroll said.

Kroll also believes that events like these bring a sense of community to the student body.

“Basketball games are a great way to get all of the PLNU community fired up for one cause. It’s kind of hard sometimes for everyone to find one thing in common, so to give everyone an outlet to show some school spirit is pretty cool,” Kroll said.

The team defeated Fresno Pacific on Feb. 12 with a score of 80-75, bringing their win streak to seven games. Head coach Matt Logie touched on how the injury of a key player affected them early in the season.

“Despite the exciting and eye-catching exhibition victory versus Pepperdine to start our season, that game actually posed great challenges for us moving forward due to the injury of All-American candidate Kaden Anderson nine minutes into that game,” Logie said.

After Anderson’s injury, the team focused on making up for the absence of their teammate. This has led them to their current winning streak.

“We have found our rhythm in conference play and as we approach the end of the season and continue to get healthier we feel we have all of the pieces capable of making a postseason run,” Logie said.

Logie is very optimistic about the rest of the season, as is redshirt first year business major Luke Haupt. Haupt plays forward for the Sea Lions but he hasn’t been able to play since Jan. 1st.

Watching from the sidelines, Haupt has gained an outside perspective on the team’s performance.

“It has been hard to maintain a leadership role but I’m trying to be as vocal and positive as I can with the guys,” Haupt said.

Like Logie, Haupt is also confident about what the rest of the season has to hold.

“We are in a good position but we have a big week coming up and we are excited about the position we are in,” Haupt said.