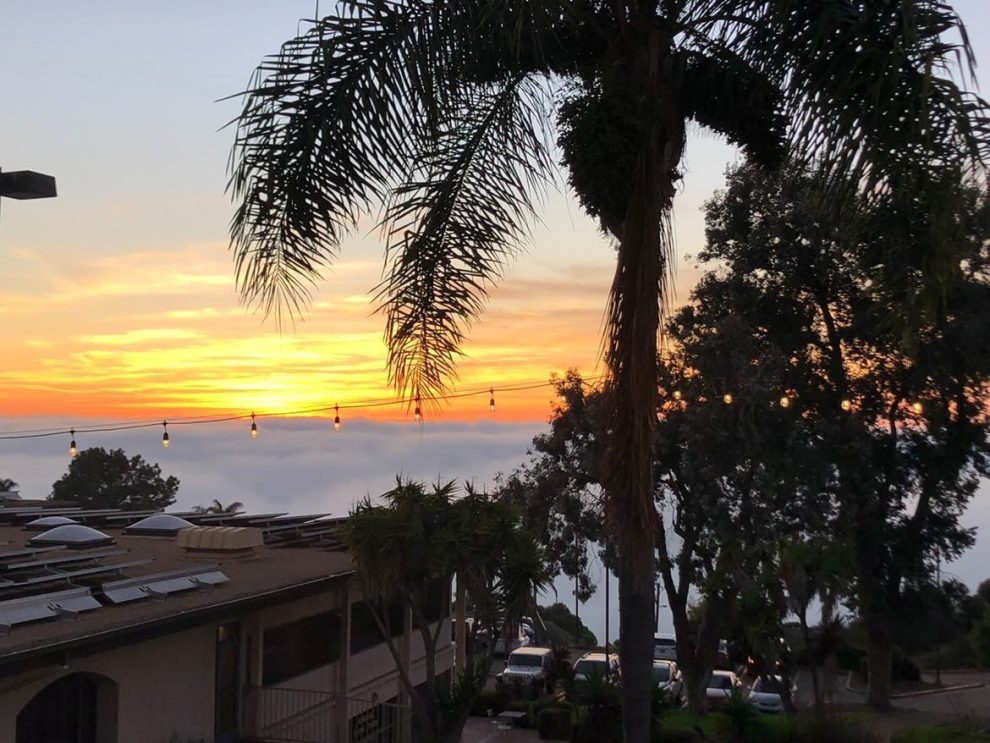 For several days in a row last week, Point Loma Nazarene University’s campus experienced a heavy fog both in the morning and throughout the day.

Most people expected it to burn off in the morning, but twice it lingered well into the afternoon, creating a spooky effect not easily forgotten.

“I thought it would burn off in the morning,” said Meghan Coley, third year writing major. “But then it just kind of stayed all day.”

Adjunct writing and environmental studies professor Breeann Kyte-Kirby said that the fog is a naturally occurring phenomenon that comes around with the changing seasons.

“What we’re seeing here is advective fog. The land is warmer than the ocean, obviously, and when the air on the land rises and moves over the ocean, it cools down and starts to sink.”

Because there is already cool air on top of the ocean, this new cooling “land air” sinks on top and pushes the air back toward land, creating the marine layer that has become so familiar on campus. There are several factors that need to be just right in order to create the kind of lasting fog at PLNU.

“It [the air cycle] creates a tiny wind… maybe five knots. The air temperature and the dew point are really close together this time of year and that’s why we have all the fog. It only works because the land is cool enough to receive the fog and that tiny wind isn’t too strong. The fog is so thick right now because the Pacific Ocean is cooling as we come into wintertime.” said Kyte-Kirby.

Thanks to that small ocean breeze, cool mornings, and an even cooler ocean, PLNU gets a special dosage of that marine layer that leaves a damp layer on everything outdoors. But not all neighborhoods near the coast get such special treatment.

“As soon as I left campus it was not foggy off campus, which was weird. So I felt like we were physically in the Loma bubble and not just metaphorically like everybody talks about [laughter]. I was talking about that with my RD, Molly, and we thought it was funny,” said Coley.

But not everybody thought the fog was a source of amusement. Cameran Sherwood, third year exercise sports science major, had a very different take on the fog.

“I was petrified. It was so scary. I went to practice at like 3p.m. on Wednesday and I came out around 5p.m. and I couldn’t see anything. I thought I was in… what’s the movie with the girl and the underworld?” said Sherwood.

While the fog might be interesting for some and scary for others, it’s doubtful that we’ve seen the end of it. With cooler temperatures moving in, expect more of those foggy mornings and creepy nights.

What does studying abroad look like now?
Breakers Market on the cusp of an economic cliff with a sea of price inflation and supply shortages.