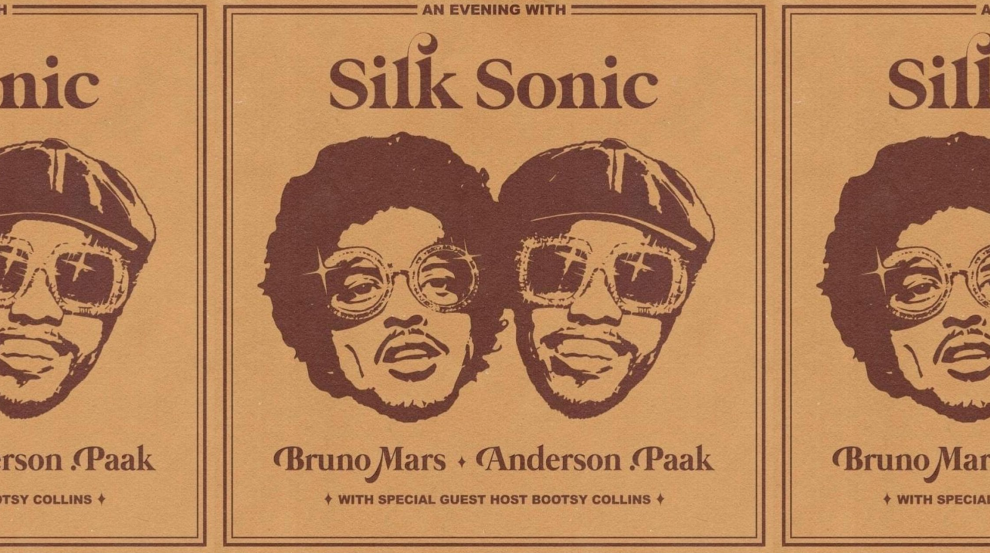 “An Evening with Silk Sonic” scratched the itch I’ve had for 60/70s Motown and 70/80s funk that fuses with modern pop music. Spanning 31 minutes across nine songs, this album demonstrates what happens when you combine the vocal range of Bruno Mars and the beats and rhythmic rapping of Anderson.Paak. You get an upbeat, rhythmic, retro album jam-packed with sounds that make your toes tap and head bop.

Instead of just being a series of songs that people can look forward to hearing live someday in concert, “An Evening with Silk Sonic” is itself an event. With Parliament-Funkadelic’s Boosty Collins hosting, Anderson.Paak and Bruno Mars create a concert experience in their intro with the lyrics inviting listeners to “get out your seats / And make some noise.”

And when you add the music videos to your listening experience, in songs like “Smokin out the Window,” they transport you to the 70s with choreography and sets bearing resemblance to The Temptations: Mars and Paak taking turns as lead David Ruffin, while the rest of band jives and performs synchronized dance moves.

Every component of the music: lyrics, drums, bass, and background singers are needed to make the songs land successfully. The rhythmic way the words are sung, and Paak’s added element of spoken word that breathes into the lyrics infuses them with the necessary movement to carry the song. So much of the lyrical content in songs like “After Last Night” involves off-the-cuff riffing vocalizations that don’t really mean anything but they clearly set the mood of the song.

“After Last Night” was my least favorite song on the album; it was a stark contrast to the rest of the album since I expected another upbeat bop after “Fly As Me,” but I thought the content of the song followed the story progression of the album. After the guy finds the girl “as fly” as him, they have their romantic night. In that way, I think the song fits but the actual lyrics weren’t my favorite. Musically it’s catchy but the lyrics, specifically in the pre-chorus, didn’t wow me.

Additionally, if the album were any longer, I don’t think it would work. “An Evening with Silk Sonic” starts off seeming like it will follow the patterns of funk and Motown where every song in the album has a similar opening: a strong bass and drums combo or a brass solo. But the pop brought in by Bruno Mars’ style harkens back to the Jackson 5. Like the Jackson 5, Silk Sonic’s various band members’ talents both vocally and instrumentally are highlighted.

By incorporating pop, it allows for some element of mystique in how the music will begin: Funk? Pop? Motown? They leave you wondering whether the next song will start off with a strong bass progression often characteristic of Motown, a funky beat dropped on the drums, or a poppy electric guitar riff. This element of surprise can only take the album so far though, and part of the experience is that the “evening” must eventually end. Nine songs was a good stopping point.

“Fly As Me” really hit the sweet spot with a mix of the three genres of music. The beginning of the song started out with bass and drums and reminded me of Stevie Wonder’s song “Superstition.” “Leave the Door Open” and “Smokin’ out the Window” were melodically smooth and lyrically suave — a testament to the album’s silky title. But Silk Sonic surprised us with pop accentuation and Paak’s rhythmic rap in “777” and “Fly as Me.”

“Skate” and “Leave the Door Open” were dropped prior to the whole album and the latter reached number four on the US Billboard Hot 100 on the week of March 15, 2021. The popularity of not only these billboard climbing songs but the album itself is because the music plays to both Bruno Mars’ and Anderson Paak’s strengths which together appeals to both their fan bases. Mars shows off his insane vocal range with long sustained high notes while Paak’s prowess in rapping and drumming is not muffled or hidden behind the voices, but rather highlighted as an essential part of the album. “An Evening with Silk Sonic” delivered what was expected from these artists and their styles, but also found ways to surprise us with their fusion of genres and undertones of Motown and Funk legends.

Brockhampton Breakup
Did We Need Another “Macbeth”? Yes