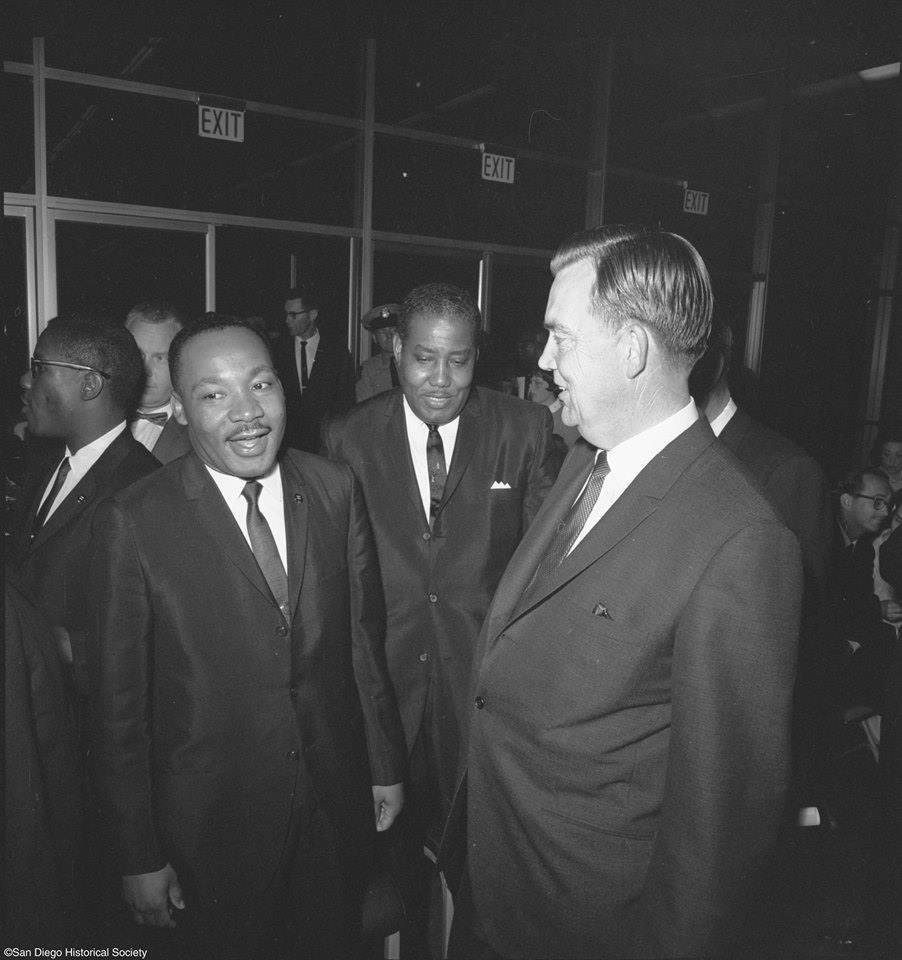 As students walked candlelit Caf Lane to recognize the life of Martin Luther King Jr., they were not reminded of photos from history textbooks that make the Civil Rights Movement seem so long ago, according to fourth-year international studies student Bethany Endo, but rather reminded of the change King and other activists put in motion less than 80 years ago which is still inspiring actions today.

Yolanda Renee King, MLK Jr.’s granddaughter, spoke to the group gathered at Nationals Park before they headed over the bridge.

“Today in 2022, the right to vote is under attack, as our elected leaders try to silence our voices,” said Yolanda. “At just 13, I have fewer voting rights than I did the day I was born. That’s why my family has spent this Martin Luther King Jr. weekend mobilizing. While I, like many of you, am not old enough to vote, this fight is personal for me.”

Point Loma Nazarene University’s MOSAIC organized a night of remembrance for MLK Jr. on Jan. 18 with a candlelight vigil procession that began at the Fermanian School of Business and trekked its way across campus to Brown Chapel. Within Brown Chapel, a ceremony was held where MOSAIC presidents gave speeches, MLK Jr. quotes were displayed for reflection, and theology professor Montague Williams was recognized for the Martin Luther King Jr. Legacy award.

Endo attended the vigil and said this event extended beyond an evening of remembrance but also an evening for education as her peers and teachers spoke about MLK Jr.

“The vigil was significant for me because it shows the impact that Dr. King has really left, even to this day,” Endo said via email. “I have participated in the vigil all four years at PLNU and I still have learned something from it each time.”

Nearly 57 years ago, MLK Jr. spoke about revolution at PLNU (then Cal Western University) and while that may seem like a distant point in time, as Endo said, it is not ancient and neither is his message.

“There is something important about being able to walk in the very spaces where world-changing figures did the work of making change,” said Williams via email. “The fact that we can all walk in that space on the way to a game, class, or practice is a reminder that we can all be about life-changing work in the world.”

Political science professor Lindsey Lupo and Williams offered advice on how to be involved in “life-changing work.”

“Look to engage in acts that are meaningful to you,” said Lupo via email.

“[It is] important to engage your faith community to help you discern your gifts,” said Williams. “We don’t all have the same gifts, but the Spirit does offer all of us gifts to join in the Christ-centered work of bringing about justice. As Paul writes, ‘To each is given the manifestation of the Spirit for the common good’ (1 Corinthians 12:7). Lastly, you can discern creative ways to expose injustices in your daily life and put on pressure for change.”

“Many post on this holiday, but then do not back up their words with action the other 364 days of the year,” said Endo. “Dr. King’s daughter, Bernice A. King, talked about how she saw so many people quote Martin Luther King, Jr. out of context instead of engaging with the complex reality of white supremacy in America and how important it is to engage in genuine compassionate action.”

To redefine how we recognize this holiday, Williams and Lupo both said it begins with education.

“The ongoing impacts of race on the lived experience have been well-researched by both the natural and social sciences,” said Lupo. “If you’re interested in the environment, look for books on environmental racism. If you’re interested in education, look for books on the achievement gap. So, educate yourself and then seek out activities that align with your passions and your knowledge.”

“The reality is that many PLNU professors are very intentional about making sure you have the opportunity to read and engage the kind of material needed to help each other ‘remain awake’ at the crucial intersections of life,” said Williams.

In addition to being a day for reflection on the historic leader that came before us, Williams said it is also an implementation of King’s words and lessons as a guiding force.

“MLK Jr. day is a lingering opportunity for society to cut through the noise and center on a common story and guide,” said Williams.

The King family called on the nation to reinvent and create justice-oriented ways of recognizing the holiday this year with particular emphasis on voting rights legislation. This message harkened back to what King said to the student body of Cal Western University 57 years ago.

How do we take the words of King – both Yolanda and Martin – and “awake” ourselves to the reality of our present state?

Perhaps more than social media posts, as Endo explains, we have to be willing to use our collective power to advocate for the present and future we want to see.

“The ways in which Martin Luther King Jr. fearlessly advocated for justice are an inspiration and reminder that each and every human’s life has inherent worth,” said Endo. “I believe that students can use the power of their vote and voices to influence policy making and can begin to make a difference through holding tough and honest conversations in their respective circles. Often the Civil Rights movement is painted as something that was ‘so long ago,’ but there are still many alive today who lived through it all.”

Live Green, Just Do It
Speaking Their Minds: James Wicks