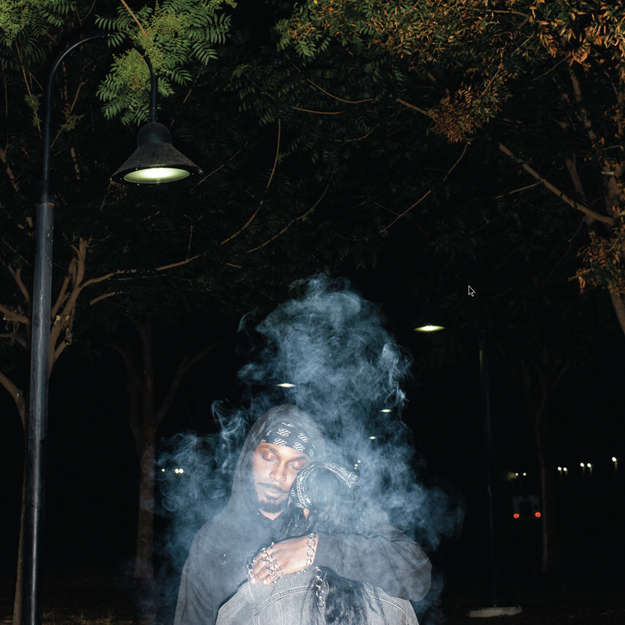 The first time I listened to this album, I thought my speakers were broken. I played with the settings for fifteen minutes before trying a different speaker and realized that the discordant and translucent sounds were intentional. Barrington DeVaughn Hendricks, who performs by the name JPEGMAFIA, released his newest album, “LP!” on Oct. 22 There are two versions of the album, an “online” version available on streaming platforms and an “offline” version that contains uncleared samples, available on YouTube, Bandcamp and Soundcloud.

Both versions of the album are good but I argue the offline version adds to the manic energy of the album and gives it a lot more deliberate variety and thematic incongruity. That being said, the exclusion of the samples is noticeable on the online version but not detrimental, it’s just not as spastic.

“LP!” can best be described as intentionally messy. The instrumentation is idiosyncratic and eclectic, the song structures are manic and confusing and it’s difficult to locate any semblance of identifiable structure because of how randomly and wildly the tone and timing change. The songs demand to be listened to and grip your attention by jumping from style to style. The album as a whole has a lived-in quality to it; the songs breathe.

The production and instrumentals appear to be all over the place but the tactful timing leaves hints of an exceptionally polished attention to detail. Hendricks effectively employs a rich spectrum of sonic envelopment by taking advantage of the multidimensionality of sound available in stereo recording. The combined elements of echoes, vocals, glitches, and artificial reverberations penetrate the listener from every direction, or conversely, they converge to maximize an important moment or memorable motif.

The opening track “Trust!” is a manic brain-bender that carries the listener straight into Hendrick’s unfocused mind. He is simultaneously speaking to himself, hyping himself up and echoing his thoughts out loud. He achieves this with a creative use of vocal effects to functionally embody a discourse between his internal thoughts and external expulsions.

A complimentary component of the vocal performance is how it jumps back and forth between studio quality and ripped from a live performance. His voice is either buried by instruments and muddled, or clean and polished like in a studio; it’s constantly fighting itself.

Everything sounds very much alive and the line between live recording and studio engineering blurs. It can be hard to tell what sounds meticulously planned and sculpted and what is instinctually improvised.

I like the track “Thot’s Prayer!” for its BROCKHAMPTON styled chorus that evokes boy band-like harmonies and R&B melodies. The reserved energy and slower pace contrasts with the guitar-driven, raging energy of the Glock-toting bravado of the track “End Credits!”

My favorite song is the bass-blasting, speaker-smashing banger, “Rebound!” This track SLAPS. My jaw dropped when the low-end burst in and Hendricks rushed in screaming, “Why would I pray for your health?! Baby I pray for myself!” He also brings back that duality of his voice by layering a second track of himself playing the hype man in between bars with “Yeah! Ok! Get it!” while also being frequently interrupted by ear shattering gunshots.  If you really want to get the most out of these tracks get a subwoofer or some solid headphones (and maybe some Tylenol if you crank the volume too loud).

A lot of the production has a 90’s flair to it through the use of sampling and layering. The revolving beats adapt and change to interact and supplement samples; it exhibits the same energy as live disc-jockeying. The prevalence of Gospel and R&B samples also have a vaporwave quality to them. They lack the slowed-down, doldrum-like quality of vaporwave and resemble more closely a hip-hop infused sound like underground producer, Slauson Malone, and his last two projects.

This album lacks the visibility to be considered an “instant classic” but it is exemplary of what artists at the forefront of creativity can produce. What Kanye fails to do on “Yeezus” and Ed Sheeran fails to do in anything, is express creativity in a saturated market of mediocrity that is finely articulated and pushes the boundaries of palatable music.

This album will never hit the radio or produce any hits, but its notoriety will be valued by how technically ground-breaking it is. JPEGMAFIA is at the top of his game and while I am excited to see what he does next, I am more excited for what this album will do to the turbulent and quickly evolving medium of hip hop.