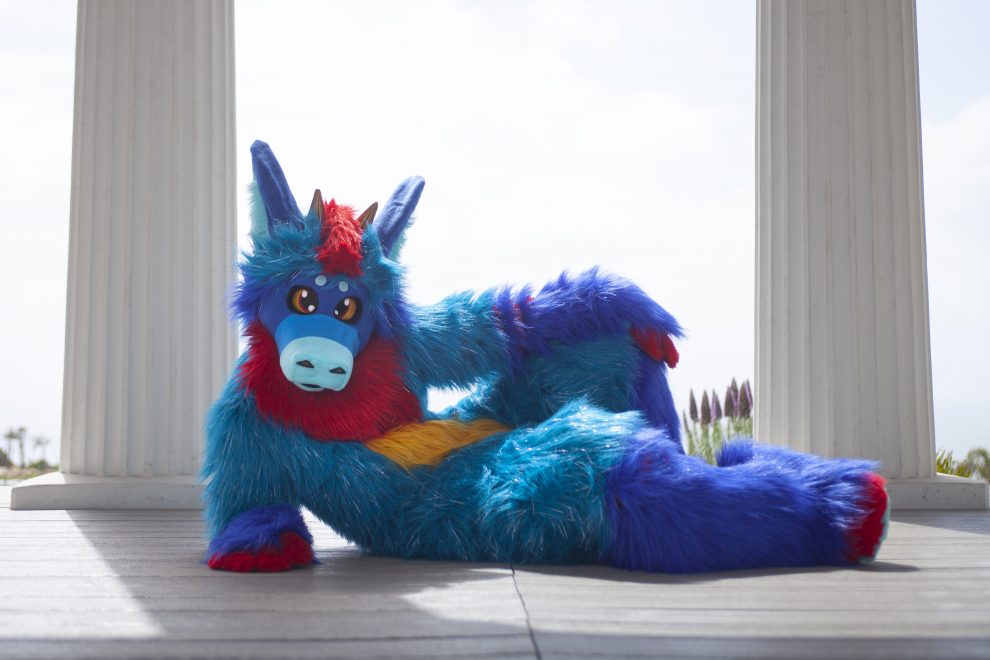 Presenting one’s work in the Keller Art Gallery is the culmination of a Point Loma Nazarene University art student’s educational career. Lael Corbin, professor of art at PLNU, described it as a journey with students taking classes to learn who they are and what’s important to them, all while watching their work evolve, leading up to the senior exhibition. For one glorious week, the student’s work will be on display. They will host a reception, talk about their work and answer questions from their professors and peers.

Visual arts major Laura Sladich knew her work would spark more questions than usual, in fact, her first plan was to make sculptures.

“I didn’t even know if this would be appropriate,” Sladich said.

Her professors encouraged her to pursue the route that would ultimately result in more controversy. It’s her show, and Sladich plans to be a professional costume designer.

That is how six fursuits ended up in the Keller Art Gallery for two weeks. But are they art?

Corbin said he not only categorizes them as fine art, but an example of what modern fine art is shifting toward.

“[Artists are] trying to broaden the definition of fine art to operate on more levels than the world they were plucked from,” Corbin said.

One example of this broadening was in 1917 when Marcel Duchamp put an upside-down urinal on display and called it art. Corbin said this kind of art calls the viewer to think about a piece both as what it is as an object and what it means philosophically. After seeing Sladich’s work and hearing the story behind it, Corbin said her show in particular really walked the line of what can be considered fine art.

This is all with just six fursuits — but they’re more than just fursuits in a room.

For those unfamiliar with the concept, individuals can don the fursuit (and become known as a “furry”) and take on a different personality, sometimes participating in dances and interacting with others wearing their own suits.

For some viewers, this brings to light topics they would prefer would remain in the darkness. An anonymous PLNU student said he knew a furry in high school:

“He was a bit odd in terms of some things he did, but overall he was pleasant in terms of interaction, but that aspect of his lifestyle, I’d rather he kept it private. If you’re into that go for it, but I don’t need to know about it,” said the student.

For Sladich, it means much more. When she was bullied in school, sewing was her escape. When she was younger, Sladich said she was working out her sexual identity.

“This is not just six fursuits in a room. It’s 12 years of progression as an artist, being fine with who I am, and enjoy doing costumes, and that I’m not just a fursuit maker, I do other stuff too.”

For those participating, oftentimes it’s a way to escape from themselves, if only for a short period of time. Sladich said an issue within the furry fandom community is a struggle with body dysphoria, which is why furries have their own anthropomorphic character they identify as. Furscience.com claims through their own data collecting from the furry fandom community that “approximately one-third [of furries] identify as exclusively heterosexual; furries are about five times more likely to identify as exclusively homosexual than the general population.”

One of Sladich’s friends, PLNU senior writing major Noah Segoria, said at the reception of her exhibition, Sladich explained the mentality behind furries: Underneath a suit, you can’t identify anything about the person in them, creating a blank slate for them to fill however they choose.

Of course, there is a side to the furry fandom that is still generally unaccepted by those on the outside. According to CNN, a “long time furry” Joe Strike, who is part of the furry fandom, acknowledged that while sexual activity happens while some people wear the suits – called yiffing – it’s a smaller part of the community, close to 15%. Sladich said this statistic is most likely wrong. While she said she does not engage in yiffing, Sladich said the majority of younger members of the furry fandom, around early 20s, do. This is what gives outsiders like the anonymous PLNU student hesitations about Sladich’s artwork.

“In general, whenever you have someone of the furry variety they’ll try to convince you otherwise, but more often than not it’s for sexual purposes. So that makes me uncomfortable that there are people living that lifestyle and that it’s something that would be promoted on campus,” the student said.

Others shared this sentiment. Sladich’s mother left a notebook at the exhibition while the suits were on display for people to write a few words after stopping by. The notes started out encouraging, but Sladich said after a few days some hurtful ones appeared.

“People have told me, ‘Take it out. Take it out.’ I want to but I don’t. Not everyone’s going to like your work,” Sladich said.

Sladich wasn’t going to let people bully her anymore. This exhibition was just the beginning to the next stage in her professional career. It was the hours of work and hand sewing the suits that resulted in what are both pieces of art and functional costumes. It was these fursuits that drew the attention of San Diego State University, which admitted her into their graduate school program. It was these fursuits that got her two job offers in the costume design field. It seems Sladich’s future in costume design may be as bright as some of her suits.

A Year as a Fully Remote Student
“A Quiet Place II”: How is Marcus Still Alive?