PLNU sophomore M’Lynn Martin will be the first woman ever to be the Associated Student Body (ASB) Director of Spiritual Life at PLNU after being elected in February by the student body.

“It feels pretty sweet,” Martin said. “I remember as a little kid I always wanted to be the first woman president. So I feel like I accomplished a mini dream of being the first woman and African American [of] anything.”

Martin first wanted to run for director of Spiritual life when she attended the Get Acquainted Party (GAP) her freshman year during New Student Orientation (NSO), where she heard the current ASB Director of Spiritual Life Riley Verner introduce his position on ASB to her class.

“I was kind of taken aback, I was like ‘That’s a thing?’” Martin said. “I just thought I want that.”

She said she soon shook off the urge to run after the GAP party, but during the summer before her sophomore year she felt God called her to the position.

M’Lynn added that her vision was to create “dreamers” and so she soon told everyone about it before she ran for the position.

Martin said her goal while in the position is to continue helping people realize the dreams that God has put in their heart.

“I want people who don’t know they have dreams to understand that [God has dreams for them] and people who have dreams, to stop fearing failure,” Martin said.

Director of Community Life Jake Gilbertson, who advises the ASB Board of Directors, is confident that Martin can do exactly that.

“It’s evident to anyone that knows M’Lynn that she loves Jesus and loves those around her,” Gilbertson said. “She has gifts that will serve her well in this role and I’m excited to see how God uses her next year.”

Verner said although he’s sad about leaving the role next year, he knows Martin will do great.

“I’m going to miss the students deeply and it will be hard to say goodbye. But on the flip side, I am excited for what is next and to hand the baton off to M’Lynn,” Verner said. “I’m really excited for M’Lynn to take over this role next year, she is an amazing passionate woman of God that will lead the student body well.”

Martin said she doesn’t feel any extra pressure being the first woman in this position.

“No matter what role, I feel like stepping into a role after anyone, there is pressure,” Martin said.

Despite any pressure, Gilbertson believes Martin is going to be a perfect fit for the position.

“I think it’s overdue to have a female serve in this role,” Gilbertson said. “M’Lynn’s personality and deep faith will have more to contribute to her success next year than her gender will, but it is great that a female student will have the opportunity to serve in this position and M’Lynn is a perfect fit for this position.”

PLNU freshman psychology and sociology major Nicol Tanaka said that having Martin on the ASB Board of Directors will allow more perspectives to be heard.

“Not only will her presence instill fairness, but will allow everyone to benefit from the perspectives of a woman,” Tanaka said. 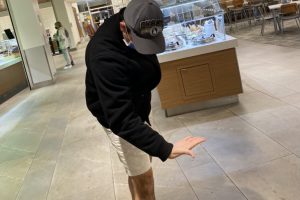