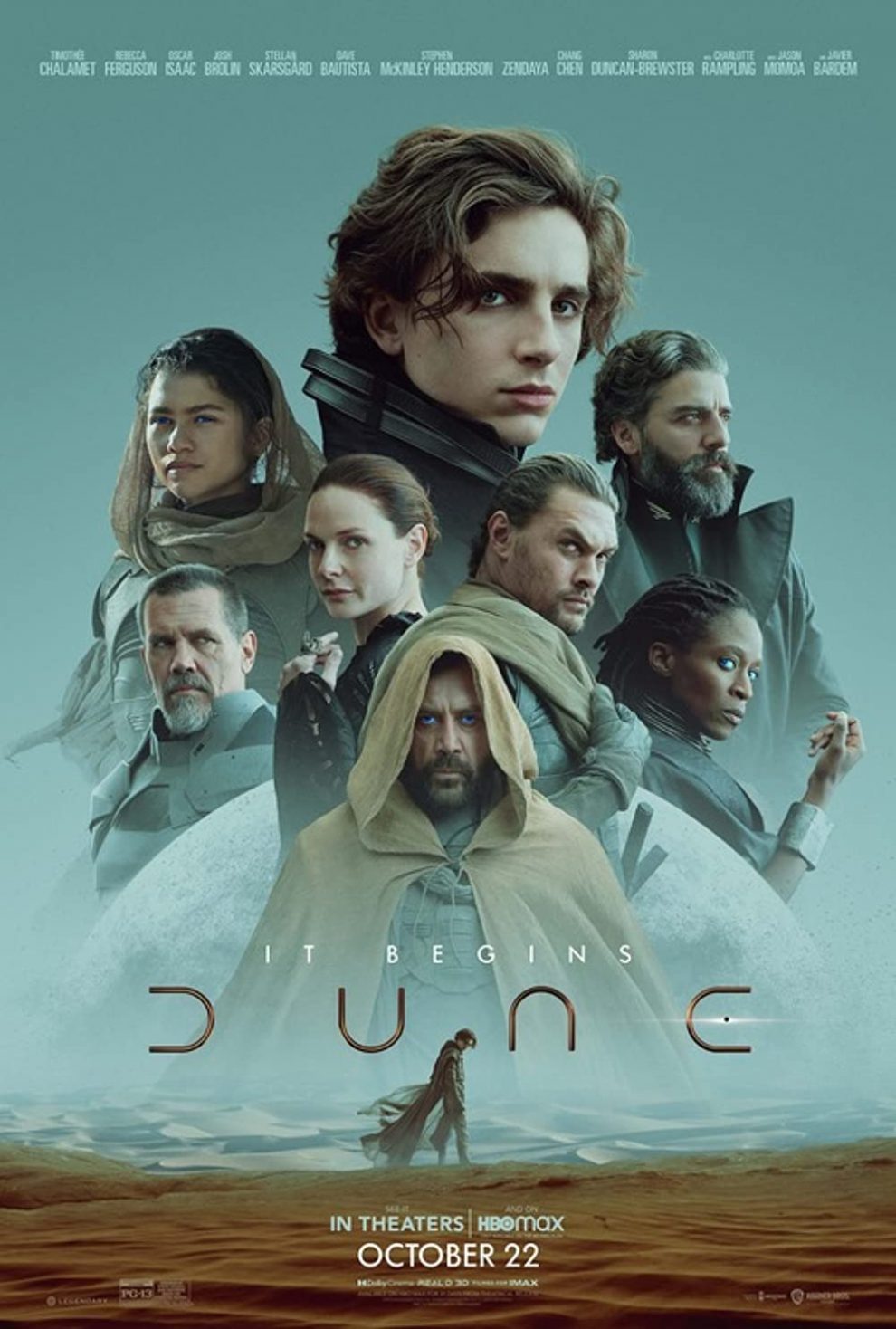 Frank Herbert’s sci-fi novel “Dune” has been adapted once more to the big screen in Denis Villeneuve’s 2021 remake “Dune”. The narrative of “Dune” (2021) is centered around an interstellar and complex civilization in the year 10191. Ruled by several houses under the emperor, the universe is oppressive and corrupt.

Young Paul Atreides, descendent of House Atreides, and his family must take stewardship of planet Arrakis for the mining of melange, or “spice”. Spice is a powerful hallucinogen and the necessary component for cosmic navigation, leading to conflict between the natives of Arrakis and the emperor. The natives, called the Fremen, highly value the spice for its spiritual nature and physical benefits, fighting against their oppressors seeking to ravage the land and abuse the Fremen for spice.

In the Fremen society, there is a prophecy of a savior that will come and lead the Fremen people into paradise. The world believes that Paul is this savior, born from both noble and sacred blood—his father the duke of House Atreides and his mother a member of the hallowed and powerful order of women called the Bene Gesserit. It is a beautiful blend of Star Wars and Game of Thrones within 412 glorious pages.

“Dune” (2021) premiered in theaters and on HBO Max on Friday, October 22. With $40 million in box office openings in the U.S. alone, this new adaptation is a much better success than David Lynch’s 1984 “Dune”, which failed because it missed the meaning behind Paul’s arc as the still growing “chosen one” and instead portrayed Paul as a god in an all-too-short feature. “Dune” (2021) improved on previous mistakes by separating the novel into several parts, whose release dates are still unknown, and casting the young-looking Timothée Chalamet to play Paul Atreides.

The film undoubtedly had a large budget and used it wisely to provide enough explosive action as well as poetic imagery to intrigue all kinds of movie watchers. Beginning with the words “dreams are messages from the deep,” Villeneuve sets the tone early for mysterious and fantastic excitement. The audience is conditioned for the story that is about to unfold with the expectation of a profound meaning.

The scenery and cinematography is stunning, emphasizing simple and minimalistic aesthetics. Anyone watching will understand the film is set in the far-off future, even without date tags and high tech. While the pacing leaves something to be desired, the film is engaging and every scene is purposeful as it holds audience intrigue.

Action scenes are spread out and performed very well with seasoned and trained actors like Jason Momoa (Duncan Idaho) and Dave Bautista (Glossu Rabban Harkonnen). The cast has great chemistry and work above and beyond to bring the characters off the page. Momoa even goes as far as shaving his beard for his role, which was a change to behold.

Despite being an incredible spectacle, there are drawbacks, even from the perspective of someone who had read the book. The book introduces a lot of new concepts and language that can be difficult to grasp, even within just the first hundred pages. The film capitalizes on the fictitious languages and the accompanying subtitles to introduce the majority of the necessary and unfamiliar words in a way that can be easily understood, a struggle that Lynch faced in his version of “Dune” (1984). Even with assistance for processing the new jargon, the film can be hard to understand and difficult to hear in moments, especially with nicknames like “muad’dib” for Paul or “Kwisatz Haderach” for the prophecy.

Also, without reading the novel, the circumstances of certain aspects of the civilization go unexplained. For example, Stellan Skarsgård plays Baron Vladimir Harkonnen and is seen floating in several scenes with a long trailing robe and glowing implants in his back. It is not known why this is in the film, but the book description explains that the Baron has become morbidly obese, possibly due to a genetic disease, to the point he can no longer walk without assistance. The implants in his back allow him to float and move on his own. Additionally, there are many visions within the film that are left to audience interpretation on whether they are visions of the future, flashbacks, or if they are alternate realities. Similar to the novel, it will take some brain power to understand these segments and may not be enjoyable for action-oriented viewers.

Another issue with “Dune” (2021) is the screen time allowed for Zendaya (Chani) and other talented actors that were capitalized on within the trailers. Zendaya’s screen-time amounted to less than ten minutes of rerun shots within dream sequences or visions.

The pacing of the film is awkward because it is based on the flow of events within a novel. All of the context and necessary events are included in the film, but it creates an unnatural process of start, stop, up, and down throughout the film. Running for 2 hours and 35 minutes, this aspect may be seen as an attempt to keep the audience engaged as the exposition for later films is laid out.

Even though the film can be difficult to grasp at moments, “Dune” (2021) captures the essence of Herbert’s persevering and “close to our hearts” story from so long ago and leaves the audience wanting more. Everyone exits the theater or finishes streaming hungry to understand the tale within “Dune”’s original pages. Based on the novel’s events trajectory, the audience has nothing but excitement and beauty to look forward to.