“So many people are doing it, everybody and their mom is doing it and the money is too good and too easy and too guaranteed. It’s really not hard to turn any female out.”

“It was our initiative, the three of us professors. We did ask the County of San Diego though, what is one of the more important research questions they want answered and this was one of them: ‘What is the relationship between gangs and sex trafficking?’” Gates said.

According to the study summary, data was collected from 1205 individuals, making it one of the largest, most comprehensive human trafficking case studies in the United States. The study gathered and analyzed data from hundreds of current and former gang members, schools, law enforcement agencies and victim service providers to better understand the extend of gang related sex trafficking in San Diego.

“This study is the first long-term, comprehensive collection of data on the Commercially Sexually Exploited People (CSEP) industry ever con- ducted in San Diego County,” said Carpenter in a statement released by USD, “[…]the result is a report that accurately measures the various facets of San Diego’s growing human trafficking problem.”

According to the study, in San Diego County, the economy of sex-trafficking represents an estimated $810 million in annual revenue and involves more than 100 area gangs. According to Gates, this makes it the second largest illegal economy in San Diego after the county’s $4.76 billion drug trade.

According to Gates, he along with Carpenter and Nurge approached the National Institute of Justice, the re- search agency of the Department of Justice, which awarded them a grant in 2012 and allowed them to begin re- search the following year.

The process involved approaching the institutional review boards of PLNU, USD, and SDSU for permission to begin to research. Next they began work with various government departments and city institutions to collect information.

“We had to get permissions from law enforcement agencies, from social services providers, and from the school districts to be able to do our research in each of those arenas. So

we wrote MOU’s – or Memorandums of Understanding – with eight social service agencies, with all of the law enforcement agencies in San Diego County and with the San Diego unified school district and other school districts,” Gates said.

After they got permission they started focus groups with 20 area high schools, collected survivor data from eight different social service agencies, data from law enforcement agencies on sex-trafficking perpetrators and victims, and interviewed 156 gang related members, 65 of whom were involved with sex trafficking.

“Fortunately and unfortunately there is a number of very significant findings, the most significant is we now have a baseline of the scale of gang related sex trafficking,” Gates said.

The study estimates that the 407 perpetrators of sex-trafficking caught by law enforcement only represents between 15-20 percent of the total number. And according to Gates, this means that there could be as many as 10,000 victims that come in contact with law enforcement and social services per year.

Gates said that the majority of victims are U.S. and San Diego citizens. According to the study, 80 percent are trafficked domestically, 20 percent are “foreign born” and 12 percent of those are from Mexico.

“This is a San Diego problem, not just because we’re a border town. So it’s a misconception that because of the border that we have this trafficking,” Gates said.

“Our study is not exhaustive, [there is] more study that needs to be done to determine what the cross-border traffic is. Our study was limited, it did not get at cross border traffic very well,” he said. 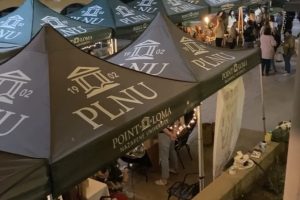 #GreenforGold raises more than $130,000
10 Ways You Know Your College Roommates Will Be Forever Friends
Comment

For Planners Who Aren’t Good at Planning

The Furry Faces of PLNU: Cats With a Wild Side