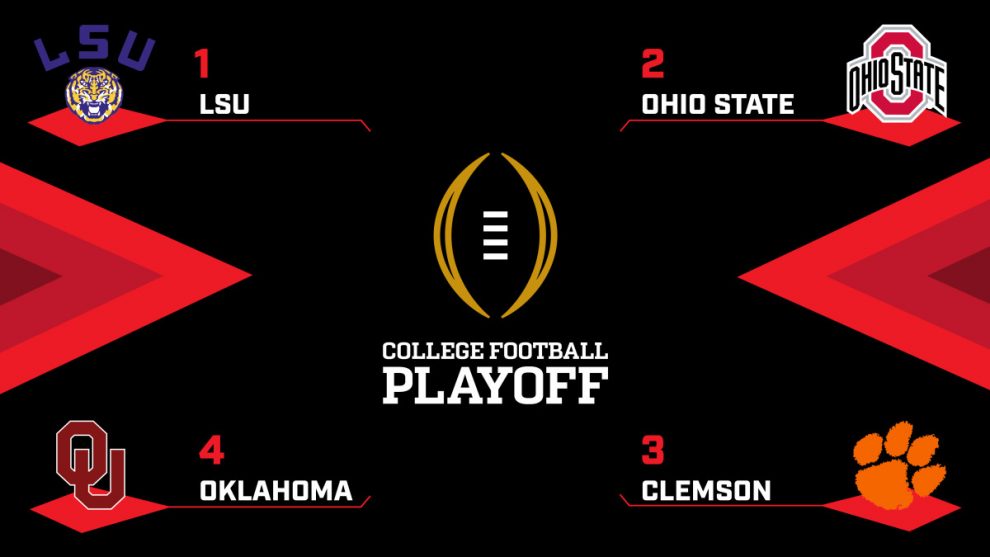 For the first time in the history of the College Football Playoff (CFP), the Alabama Crimson Tide will not be included after they lost to Auburn, ruining their chances of maintaining their playoff streak. It is the last week of the college football regular season and with that came the final standings and matchups for the 2019 CFP.

In this year’s playoff, we will be seeing Louisiana State University (LSU) as the No. 1 team in the nation, Ohio State as the No. 2 team, Clemson as the No. 3 team and Oklahoma taking the fourth and final spot.

LSU claimed the top spot in the standings after beating the Georgia Bulldogs in the SEC championship game. Senior quarterback Joe Burrow, currently the Heisman favorite, leads LSU and their high-powered offense.

Ohio State dropped to the second slot this week after having to come back to win against Wisconsin in the Big 10 championship game.  They are lead by star quarterback Justin Fields and defensive star Chase Young. Both players are near the top in the Heisman voting, and Young is projected as a high draft pick in the upcoming draft.

Clemson, the reigning champions, are the third overall team and come in winning their last eight games by at least 35 points.  They are led by sophomore quarterback Trevor Lawrence, and he is helped by a standout receiving corp and running back Travis Etienne.

Oklahoma is the last team to get into the playoff by beating the seventh ranked Baylor Bears in the Big 12 Championship game.  The Sooners are led by senior quarterback Jalen Hurts, an Alabama transfer, and are making their third straight appearance in the CFP.

The first matchup consists of LSU with a matchup against Oklahoma in the Peach Bowl, and LSU enters the game as a 9.5 point favorite over the Sooners. In the Fiesta Bowl, Ohio State faces Clemson with Clemson opening up as a 2.5 point favorite.

With the power that LSU brings on offense and defense, I think that you will be seeing them move on to the championship game with a big win over Oklahoma.  I also believe Chase Young and Justin Fields are going to be too much for Clemson to handle. With Burrow matching up against his former team Ohio State in the championship, my prediction is the LSU Tigers will be the 2019 National Champions while winning by a score of 27-24.

Both games will be played on December 28th with the National Championship being played on January 13th.

The Return of Intramurals