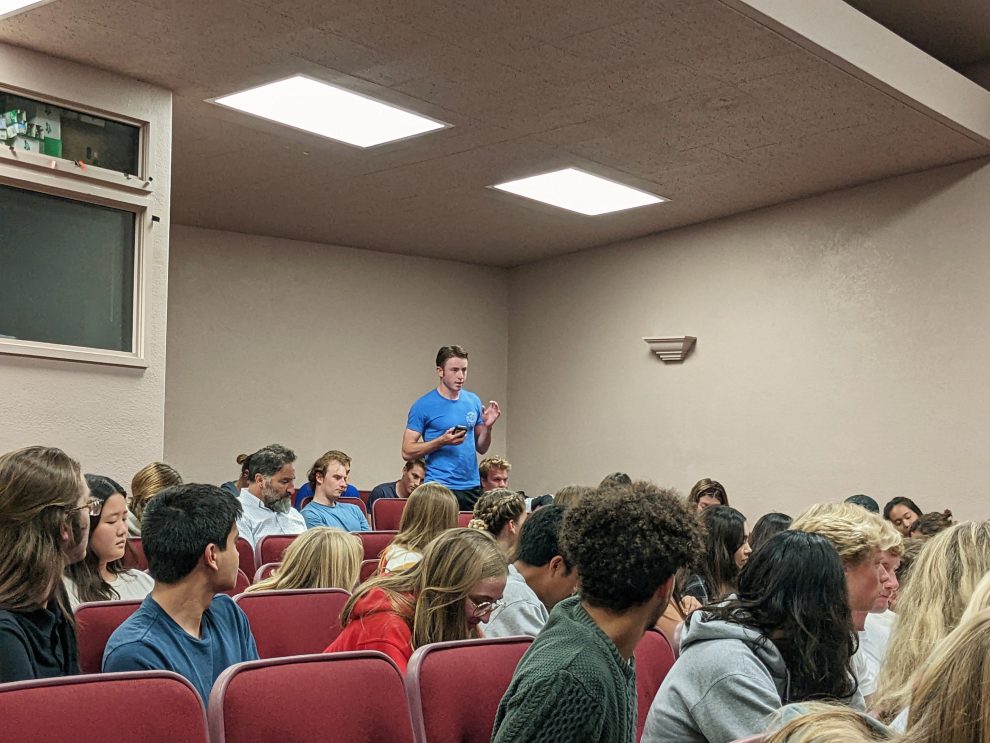 discussion on Oct. 5 regarding a chapel petition and nine-page explanation that was signed by 229 PLNU students.

The petition, concerning the current practices of PLNU’s chapel, called for the Gospel to be more actively preached. After receiving the petition and the nine-page explanation, the chapel planning committee sent an email invitation to student leaders and those whose signatures on the petition SLAF could discern to discuss the petition’s focal points.

The following day, third-year computer science major Noah Shaw, who wrote the petition, then sent an email to the same group. His email contained an invitation for students to attend the discussion, and for attendees to come with questions and to be respectful. Below is an excerpt from the email:

“I would like to ask that when you come to this meeting and bring questions, that we do not come from a place of anger…I believe there is still a way to present our concerns in a strong and united way while minimizing conflict and not putting them on the defensive or attacking their character. We have gotten their attention and I believe that there is a good chance that they genuinely do want to hear what we have to say.”

Three members of the chapel planning committee led the discussion including vice president of SLAF, Mary Paul; university chaplain, Esteban Trujillo and director of worship arts, George Williamson. Member of the chapel preaching team and professor in the School of Theology and Christian Ministry, Brad Kelle, was also brought to lead the panel. All four discussion leaders are ordained ministers.

Prior to the discussion, Paul, Trujillo and Williamson met to discuss how best to create a space where they could respond to the statement on the petition and receive follow-up questions.

There were around 80 attendees, made up of students who either did or did not sign the petition, some SLAF staff members and alumni.

The discussion began at 8 p.m. in Salomon Theater, where Paul, Trujillo, Williamson and Kelle shared their responses to the petition, explained how chapel is programmed, and the efforts they put into making chapel accessible for all students.

In an email response to The Point, Paul shared the themes mentioned in the discussion:

Paul added that there are many different teams who gather and plan chapel, de-brief and pray. Worship interns, a logistics team and the chapel planning committee meet weekly, while a big ideas group meets monthly. Several staff members, the student chapel interns and the ASB Spiritual Life Director are part of different iterations of those meetings.

The four discussion leaders shared their input for the first 40 minutes of the discussion, while the remaining 20 minutes were reserved for students’ questions.

During this time, many students shared their testimonies on how they wanted chapel to preach the Gospel more and expressed concerns for their friends who they believed were living in sin.

Shaw went into the discussion with the intention not to speak, as he felt that attendees already knew his thoughts towards chapel.

“A lot of things that students said stuck with me because it was some reassurance that I was not alone in how I was feeling,” Shaw said.

Robin Michaelian, PLNU 1994 alum, attended the discussion with her husband after reading about the petition on The Point’s website.

During the discussion, Michaelian said that the chapel planning committee and the students were talking past each other.

“The students were pleading with the staff… to make the chapel message… go deeper and to say something that moves them forward in their spiritual walk. The students were clear that they did not want to hear cliches about the gospel,” Michaelian said.

Wesley Aring, second-year multimedia journalism major, attended the discussion, as he was a signer of the petition. He believed that the question-and-answer format of the discussion kept the conversation at a surface level, which led to students’ frustrations.

“There were good and bad questions, and good and bad answers from both parties,” Aring said. “At the end of the day, town hall meetings are supposed to be a discussion. The purpose is to hear the nature of what others have to say.”

Shaw was also upset by the time distribution that each group had to speak.

“I felt that the meeting was fairly ineffective, at least on the surface. Their original plan was 40 minutes of them talking and then 20 minutes to answer questions, which seems like an uneven breakdown and luckily a lot of people did have questions so it did go over. It seemed like there was a big disconnect where we were saying one thing and they were saying something else,” Shaw said.

However, Shaw did see the discussion as an opportunity for both the staff and students to have their voices heard and expressed appreciation for the staff who held the discussion.

In an email response to The Point, Trujillo said that his continued priority is the pastoral care for PLNU students, including “walking alongside them on their journey towards living and loving in the way of Jesus and his Kingdom.”

Following the discussion, Trujillo shared vehicles of chapel feedback that will be relaunched.

“Our office will be relaunching student feedback tools and resources in the spring that were in existence pre-COVID, such as a chapel survey for all students, the Chapel Advisory Team (CHAT) gathering where students meet monthly with chapel staff and a student focus group study on chapel by an external moderator,” Trujillo said.

Paul sent a follow-up email to the students whose signatures the chapel planning committee could discern from the petition, thanking them for engaging in the conversation.

“As we continue to listen to and prayerfully consider the concerns raised, it is important to note that we heard you,” Paul wrote. “As we move forward, we will be looking at the best vehicle/process for hearing from the larger student body. This will take some time and work to discern the next steps.”

Hostile Terrain 94 Exhibit Is Coming to PLNU
Everything You Need to Know About the Caf: Sourcing, Food Waste and Special Diets