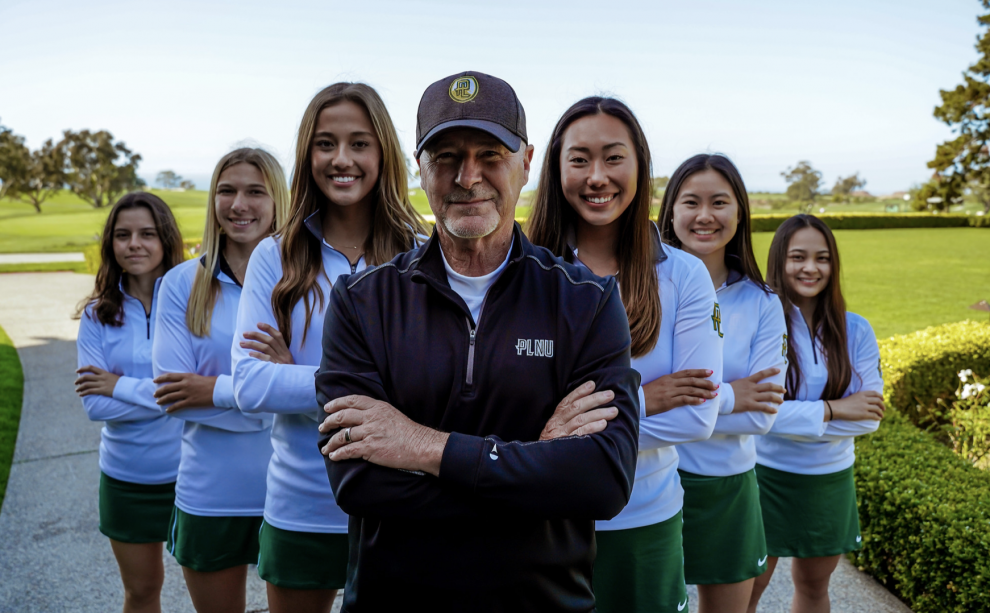 The past year in sports has been unprecedented in a plethora of ways, and the PLNU women’s golf team added to the list of firsts when they won their first ever PacWest championship this spring.

Led by seniors Alli Kim and Christine Perez, the Sea Lions dominated the PacWest tournament in Hawaii, winning the three-day tournament by 21 strokes. By winning the PacWest, PLNU earned its place in the NCAA Super Regionals in Denton, Texas on May 3-5.

“It means a lot to win the PacWest because it has been such a good year, and we have done well the entire year leading up to it,” Kim said. “It is a great feeling as we seniors wrap up our collegiate careers.”

As Kim alludes to, the team has had a high level of success all spring, winning four of the five tournaments they participated in, and their other result was a fourth-place finish in a tough field at the WT Desert Invitational.

“We all just came together as a solid group with one mission, and it’s really that simple: you mix that commitment to each other with talent and good things are sure to happen,” Coach Lance Hancock said. “I believe this year’s results are from the love these women have for this school and for one another, as well as for their sport and wanting to succeed as a group.”

Kim pointed to the team chemistry as a key to the team’s success, but she also noted how helpful it has been to have a lot of talented first-year players.

“We have a lot of good freshmen this year, which obviously helps a lot with scoring and just talent on the team,” Kim said. “Besides that, I think a big reason why we have played so well is that we all get excited when the others play well and always support each other. The talent was always there but getting that chemistry together and working together is a big key to our success, even though golf is a pretty individual sport.”

The team has three first-year players: Nicola Kaminski, Raquel Prado and Haley Wong. Each player has contributed to the team’s scoring throughout the year, even though college golf is a big step up from the high school level.

“High school golf was a lot less competitive than college golf since we would play nine-hole matches, and the field was never very competitive because it is hard to find six girls who play golf seriously,” Kaminski said. “In college you are playing for your team, so every stroke matters, and my team has showed me that if you are having a bad round, grind through it because it’s not over until you finish the last hole.”

Kaminski also pointed to her teammates as the reason for her success as they constantly support her during the challenges and help her improve her game and gain confidence in herself.

The team balances fun with focus, and Hancock believes they must continue this approach in order to succeed at regionals.

“The team is always laughing together, loving each other, but then gets to work when they have to get to work,” Hancock said. “They’re freed up to play for each other because they know someone’s got their back if they need help.”

Although Hancock and his team are excited to win the PacWest, they still have lofty goals for the season and hope to qualify for nationals. Hancock stressed that they always hope to play in a way that honors God and to win, but he believes the team can earn a spot at nationals by finishing in the top three.

“I believe that our team can advance to nationals if we play the way we have all season,” Kaminski said. “I think the strong bond we all have allows us to build each other up and help us play our best game, and as long as we support each other and work through any rough patches during the tournament, we can be successful.”

“The skill level is all there, and we just need to put it all together for three rounds, knowing that we are as good as other teams and executing what we know how to do, even though the course and conditions will be more challenging,” Kim said.

The journey continues for the team, and if they play the way they have all season, the expectations and potential for the Sea Lions is sky-high. No matter how the season finishes for the team, Hancock expressed how proud he is of the women.“The pride is unmeasurable,” Hancock said. “It is like watching your child succeed at something, the investment is very similar in a strange way. I’m sure that this is the feeling coaches experience which made them want to become a coach in the first place. Throughout my time here, all the teams I’ve experienced at PLNU have been special in their own way, but this group is what I had envisioned on paper when I came here.”