I am writing this story from bed. I often find myself working from bed these days, something I still struggle to come to terms with. I am a 100% disabled combat veteran. I live with a tapestry of autoimmune issues garnered from a combination of a condition called autoimmunity, 10 years of service and three combat tours as an Army photojournalist. My wounds, although life-threatening and painful, are unseen. The hits my body took were to my nervous system, resulting in a handful of painfully fatiguing, emotionally exhausting and life-threatening invisible illnesses.

According to the Very Well Mind website, there is no one accepted medical definition for the term “invisible illness.” The term refers to illnesses generally associated with chronic conditions such as debilitating pain and fatigue that can’t be easily recognized by looking at someone. To someone who does not know me, I look like an extremely healthy human. I am a tall woman at six feet and have retained an athletic build from my military service, distance running and swimming. I am blond, tan and look more like a professional volleyball player than a sick person.

I have gotten more than my share of quizzical looks for using disability parking as I exit my vehicle, assuredly striding away. What people don’t see is my body silently screaming, tendrils of pain snaking up the sides of my neck into my throbbing temples, my vision oddly blurry, while long swaths of sharp stitches encapsulate my rib cage, making it hard to breathe. Nor do they see the slight sag in my shoulders from unrelenting fatigue, my body temperature spiking inexplicably, sweat ruining my makeup, nausea pushing at my esophagus. It’s a daily dance with symptoms that many of us with invisible illnesses endure without batting an eye.

The site says common examples of invisible illnesses include myalgic encephalomyelitis (chronic fatigue syndrome), lupus, fibromyalgia and Crohn’s disease. Many autoimmune diseases fall under the wide umbrella of invisible illnesses, many still very misunderstood and often misdiagnosed. I live with fibromyalgia, which is an often debilitating nerve pain disease, Hashimoto’s Disease, which is thyroid insufficiency and a rare condition called Addison’s Disease, which is adrenal insufficiency.

Unbeknownst to me before my diagnosis, you cannot live without adrenal glands. I left the service in 2013 not knowing how damaged I was. By 2015 my adrenals burned out fully and I collapsed. The collapse brought me so close to death that it shocked my system into fibromyalgia. According to my disability paperwork, my thyroid was the initial gland to deteriorate, forcing my adrenals to work harder and harder to deal with the growing stress of my job.

But the true culprit was autoimmunity, a condition I was born with in which the body produces an influx of white blood cells. The extra blood cells are not healers like their fellow white cells, but instead get confused and attack healthy tissue. Thus, my body is always systematically attacking itself, different parts being destroyed in different ways.

I take medication to supplant the hormones that my adrenals and thyroid no longer make. Without my daily adrenal medication I would pass within a matter of weeks. It’s a sobering thought. The way I explain it to others sometimes is that if we were in the Zombie Apocalypse my first order of business would be to break into as many hospitals and pharmacies as I could find and collect hydrocortisone, the drug that keeps me alive.

I also take a smorgasbord of supplements and antidepressants for pain, insomnia and the anxiety and depression that can accompany living with invisible chronic illnesses. According to VeryWellMind.com those who live with chronic illnesses can often be hit with the stigma of “but you don’t look sick.” Because we do not wear our symptoms outwardly, we often feel judged in a myriad ways, or are at least paranoid that we are. We are often accused of being dramatic, lazy or just a plain a****** when our symptoms flare. It’s hard to keep a smile when you are fighting with constant pain and fatigue. It’s also hard to keep a smile when you know you are being judged for something that causes you so much struggle.

Many invisible illness warriors have learned to work and live with excruciating symptoms just so they do not feel that awkward estrangement from what so many of us begin to see as “the rest of the world.” Symptoms may plague us for days on end, slowing our life and work, then often halting it completely. There are days we may spend in bed, absent from the rest of the world, our dreams sometimes seeming to be perpetually on hold.

In the Army I was a proudly strong woman, a certified bad-a**. I traveled all over Afghanistan into the most treacherous areas, I could run like the wind and do push ups like it was nothing. Now, I get tired if I walk around Target for too long. Before, I could work 14 hour days and still go to the gym for a 10 mile run afterwards. Now, I have to “take a little rest” after completing a few homework assignments.

This is definitely a world I had to get used to living in. Each day I wake up with a baseline of general pain and fatigue, like a cold coming on. I have learned it’s important to move my body as much as I can. I may not be doing 10 mile runs anymore, but I sure can hit the gym for a bit or get out and enjoy a walk. And now that I’m slowed down, I try to smell the roses.

When it comes to living with invisible illnesses I have also learned that attitude is everything. I do not resent the Army or the war for where I am. I wouldn’t give up my experiences for anything, like riding low in a blackhawk helicopter over poppy fields, my boot dangling from the open door hatch, Nikon D200 in hand.

I have learned that each day is not promised in health, so make as much as you can of the good days. I have learned to love life on a deeper level, and appreciate it more. I ruminate on the little things more often and I seek peace above all other things. Stress now makes me sick. I have become a priestess of silver linings, learning to meditate into my pain and find deeper truths of self. I am wiser, and on the good days, I am even happier than I have ever been before. 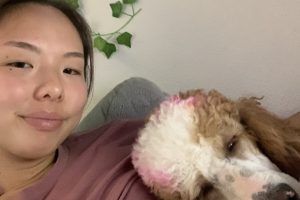 It’s For Adults, Too! A Chocolate Milk Review
President of the Democratic Club’s Response to Midterm Elections