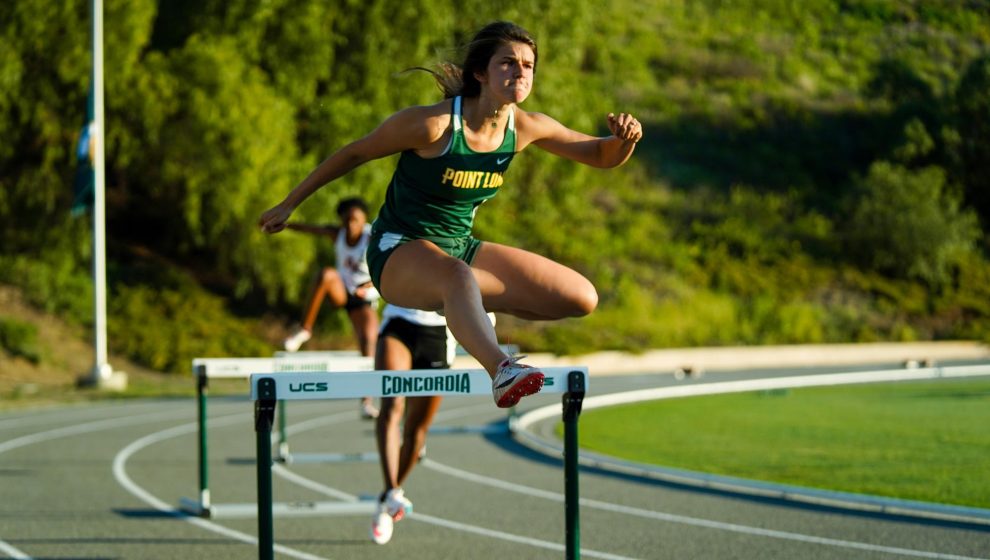 Avery Avina is a senior runner for the women’s track and field team. She competed in the 400m hurdles, the 100m and the 4×100 relay. Her relay team finished the season with a season-best time of 47.54. As an individual, Avina ran her final 400m hurdles race in 1:03.23, a career best and one that nearly earned her a spot in PLNU’s top-10 fastest times for the event. Avina shared with The Point about the challenges and joys from this season, and reflected on her time at PLNU.

The Point: How has this season gone for you personally and for the team overall?

Avery Avina: Personally, this was the best season I’ve ever had performance-wise. I have never been able to score individual points at conferences before this year, but I can’t take the credit. It has come from a delight in the opportunities, skills and abilities that the Lord has given me. I have had to actively lay down my anxieties and pride in order to find really sweet delight in one last ride. There’s nothing like running a race free from the stress and pressure I put on myself and just getting to delight in this sport as a gift from the Lord.

However, performance-wise for the team, if you just look at the team scores at conference, we lost by a long shot, but it doesn’t feel like we did. We competed against the number one team in the country as well as some other top track teams, and we walked away from the meet with smiles on our faces after some personal records and amazing performances from our women. We sang our hearts out for the whole six-hour bus ride home from Fresno, which made it feel like we just lost by over 100 points to Azusa. Just looking at the stats, it wasn’t great, but we had so much fun doing it.

TP: Compare this season to prior seasons. What was challenging about this year?

AA: In the past, we have had really big teams and have been able to score lots of points across the board. Two years ago, we finished just behind Azusa. This year, our team is really small, so it was tough to compete against these teams with double or triple the number of athletes. However, with a small team, you can come to know and love almost all of them. I don’t think our team has ever been so close. It was hard to have all the seniors from my class not return with me, but it was really sweet to get to love the freshmen.

TP: Reflect on your experience at PLNU. What will you remember from your time at school and competing on the track and field team?

AA: I will never forget how cared for I felt. I never was alone. My teammates were always the sweetest support system, and my coaches were always in my corner. This school is losing a lot with Coach Shane Peterson leaving. He was almost like a stand-in father figure during my five years here, and it was such a gift to learn from him.

I am so grateful for my time at PLNU because it was where the Lord met me and brought me close to Him. He used my competition seasons to shape and mold me into who I am now. I learned how to take initiative and help lead a group of wonderful girls, lean into hard things knowing there is good on the other side, bounce back from tough losses, see my shortcomings and faults and be humbled in comparison to who He is. However, most importantly, I learned to put my hope in Christ and not in my performances to be set free and enjoy the good gifts He has given.