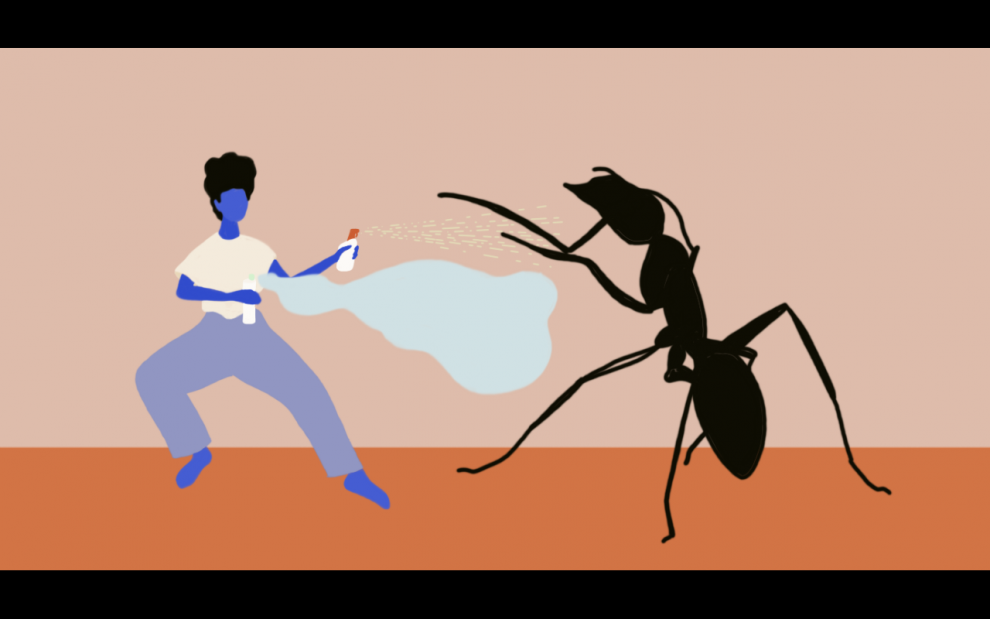 When someone asks me what the worst part of my university experience is, one might expect me to answer: the workload, a challenging professor or the loneliness that comes with being a first-year during COVID-19. Thankfully, Point Loma Nazarene University brought none of those to the table to complain about. Yet, one thing does come to mind, and that is the ant problem.

Many students on campus can relate to having these unwanted roommates, who steal food without asking, invite their countless friends over and break ResLife rules by crawling through the window.

Students scrambled to find the best solution to kicking these pests out, and I am here to present alternative treatments recommended by fellow classmates.

Gabe Tacklind, first-year music and philosophy major, started having these pesky visitors his third week on campus. As a friend of his, I was one of the first to know after receiving a message in a group chat exclaiming, “BRO THE ANTS KEEP COMING.”

With those in the group chat having little to no knowledge on how to solve the problem, Tacklind did not receive help. His ant problem went on for a week and started to stress him out.

“I felt like it was out of control. They weren’t eating anything but they also wouldn’t leave,” he said.

Out of options, Tacklind chose a therapeutic method many teenagers use: Tiktok. He made a video featuring the hundreds of ants crawling around his walls which has so far received 202.4K views.

He ended up finding that Terro Ant Bait Spray worked best because it killed the ants immediately.

“I originally used the Terro Ant Baits, and they worked really well,” Tacklind said. “except they attracted a lot more ants in the process, so I switched to the spray. The Raid Bait didn’t work at all.”

He also said a pro of the spray was that it would kill the ants immediately and prevent their return, whereas a downside is that you have to clean up all the ant corpses afterward.

Contrary to Tacklind’s experience, Luke Kesler, first-year marketing major, found the most benefits from using Terro Ant Bait Traps. His ant problem was not troublesome to begin with, but after the first days of noticing their presence, he saw large amounts of them crawling out of his heating unit. It became apparent he had to take action.

“The Terro Ant Bait Traps work really well, however for about two days there are hundreds of ants that come to the trap which can be pretty overwhelming and gross, but it gets the job done,” Kesler said.

Kesler’s experience with ants lasted around two weeks. He continues to have one or two ants stop by, but is not bothered.

Instead of the traditional insect-repellent solutions many resort to, some students find alternative options to kill off these nuisances. Jen Pfeiler, senior multimedia journalism major, found a more holistic method ⎯⎯ essential oils.

Being in an off-campus apartment, Pfeiler and her roommates faced more than just ants.

“Our problem in my apartment was with many unknown critters, including ants, bed bugs and probably fleas. I would wake up every morning with new bug bites and my feet were so itchy all the time they are [now] practically scarred.”

Pfeiler began having bug issues when she moved in late July. She had pest control spray chemicals meant to kill bugs all over the apartment, but she still was getting bit after the visit.

“That’s when I started putting essential oils on my feet before bed. Since then I haven’t gotten new bug bites,” she said.

Pfeiler can’t think of many negatives of essential oils. There is no concern about chemicals getting into one’s body, as the plants the oils come from carry properties to keep pests away as they would in nature. She said, “The only downside is that they can be expensive, but once you do buy some, a little bit can last a long time.”

Another alternative insect-repellent source is a household item that (hopefully) many freshmen brought with them on campus. Febreze was the ant-killer that freshman biology major Trevor Richardson found best worked after being introduced to the ants his first day on campus.

Things got worse once he put food in his trash can, so he became desperate.

“Febreze was the only thing I had at the moment, but it worked surprisingly well,” Richardson said. “Before that, I surrounded my trash can with duct tape with the sticky side up which stopped ants from walking [to the trash].”

However, he said there is a major con to the air freshener: “If I spray it one too many times, my room can become pungent with ‘Sea Spray’ for hours.”