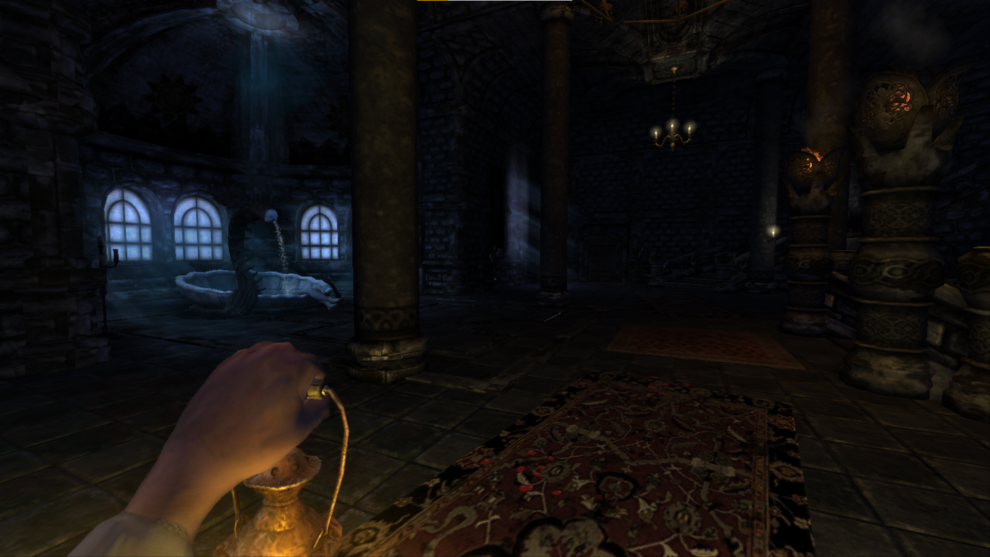 Amnesia opens up with, well, amnesia.  The game mainly revolves around puzzle solving, exploration and playing hide and seek with the various monsters found around the castle. There’s no combat, so all you can do when you see a shambling atrocity is flee screaming in the opposite direction, or attempt to hide yourself behind a foot wide trash bin in a panic.The only thing you have on you is a note stating that your name is Daniel, and you need to kill a Baron of a Prussian castle. In addition it tells you that you are being hunted by a shadow, and that there’s no way to fight it. All you can do is run.

Now if this seems generic, that’s because it is. The trope of having amnesia in video games is a tired and worn cliché. However, Amnesia, like all other aspects of the game, utilizes that cliché so well that you never notice it. The game’s ability to frighten you through footsteps alone hasn’t gotten weaker in the better part of a decade. It also presents numerous gameplay tweaks that provide an extra layer of challenge and fear to the story.

The main problem you will run into is the fact that Daniel is someone who seems to have slept with a night light until the age of 23, because he will literally start to go insane after a few seconds in the dark. This is represented by Amnesia’s main unique gameplay mechanic: The sanity meter, which acts as a secondary health bar. Spend too much time doing something Daniel is afraid of, such as the monsters and staying in the dark, and the meter will start to drain. After prolonged stays in the dark, the screen will start to become blurry which, I’m pretty sure, is not how insanity works, but I’ll leave that up to the psychology majors to dissect.

The monsters themselves are fantastically designed. These creatures, called Gatherers, reek of inspiration from “The Thing” and other body horror movies. From the way they move, to the noises they make, they’re always horrifying to look at. While you don’t actually see them too much, because of the sanity meter, the limited use works in its favour. Amnesia taunts you with the threat of them, having you hear their moans, or footsteps echoing around the corner. It puts a lot of psychological stress on the player.

In fact, this well defined horror technique is what makes Amnesia stick out to me. There aren’t any flashy gimmicks, or pretentious themes. Amnesia knows exactly what it wants to do, and how to do it, and wields the elements it has like a surgeon with a scalpel. This is why Amnesia is one of my favorite horror games and one I recommend for anyone interested in exploring the genre.