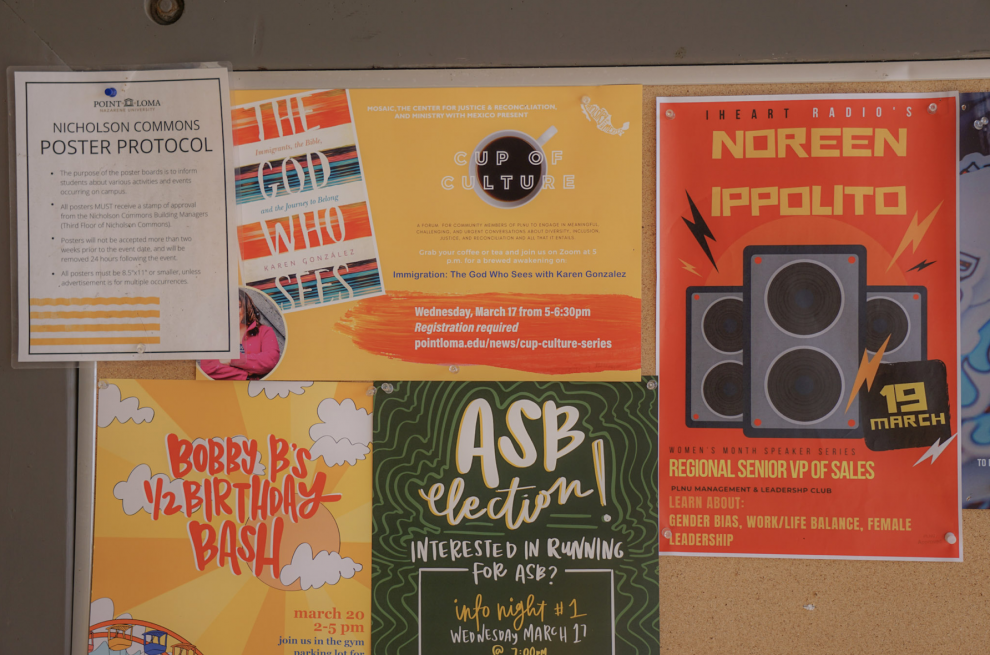 “The TPUSA national organization didn’t fall in line with ASB’s mission statement,” Moses said in a phone interview with The Point. “I had several examples and talked a lot with Scott McGowan [Director of Community Life] and the Board of Directors, and they all supported that decision, so with their support I decided to decline them,” Moses said.

Moses declined to provide specific examples of how the organization did not align with ASB’s mission statement. According to Moses, the mission statement reads: “The purposes of ASB shall be (a) to provide for meaningful, student-sponsored educational, social, cultural, religious and service opportunities for member students; (b) to foster constructive communication and interaction between the members and the administration and faculty; (c) to foster good relations between ASB members and the university’s surrounding community; (d) to establish rapport with other student associations with similar objectives; and (e) to provide opportunities for members to develop leadership qualities.”

Turning Point USA is a non-profit organization founded in 2012 by Charlie Kirk. According to TPUSA’s website, the organization’s mission is to “identify, educate, train and organize students to promote the ideas of freedom, free markets and limited government.”

With a presence on more than 2,500 campuses, TPUSA works, according to their website, to create the most “organized, active, and powerful conservative grassroots activist network on high school and college campuses across the country.”

The organization is also known for its Professor Watchlist, which exposes and documents college professors whom TPUSA claims “discriminate against conservative students and advance leftist propaganda in the classroom.”

Some of the faculty on the list reported harassment and death threats after being added. Professors are added for any instances of radical behavior according to the Professor Watchlist website.

Annalise Welsh is a first-year political science major who would have been the club’s vice president. She said there are a lot of misconceptions about what TPUSA is, specifically regarding the now denied club at PLNU.

“It’s nonpartisan,” Welsh said. “It’s not affiliated with any representatives, candidates or politicians.”

She said these ideals are forgotten today, especially in the media.

“Our mission for TPUSA at [PLNU] is ultimately to open up a conversation because we feel that, in general, a lot of organizations, clubs and the media out there today silence opinions. They only want to hear from one side rather than all the sides,” Welsh said.

As an organization, the chapters at every college are going to be different, Welsh said. She added that TPUSA at PLNU wanted to open a civil discussion for different ideologies and values such as capitalism, free speech and freedom to say and post what you want.

“We want to show people that conservatives aren’t always these terrible, racist people,” Welsh said. “I feel like the right, or just people that aren’t left-leaning or centrist, are sometimes made out to be something that they really aren’t by the media.”

According to Welsh, socialism and left-leaning beliefs are popular in higher education, and the purpose of TPUSA at PLNU was to make room for diverse political conversations. She said, “A lot of clubs want only people with their beliefs, and we want to welcome everyone.”

However, Welsh added “the beliefs of the organization [TPUSA] are conservative and definitely more constitutionalist than the average.”

Zeshan Monks-Husain, a junior philosophy major who described himself as a socialist, expressed his disapproval of the national organization on his Instagram account.

“TPUSA exemplifies that they don’t care how different other people might be,” Monks-Husain said in a Zoom interview with The Point. “They want everyone to believe America is exceptional and their foundations are exceptional and I think that’s wrong.”

Monks-Husain said some members of TPUSA at PLNU were caught on video tearing down posters for Voices of Love, a LGBTQ-based club at PLNU. The Point was not able to obtain the alleged videos.

“The right organizes well, it’s easy to support them, they spend thousands on student government to make sure they’re winning. Leftists don’t have that,” Monks-Husain said. “TPUSA funds student governments on college campuses and their campaigns. I don’t know of any left organizations that are doing that.”

Welsh has not looked into TPUSA’s Professor Watchlist, but she said it’s not what TPUSA at PLNU wanted to do.

“Our mission for our chapter is we want to be a place where everyone is mutually respected and we want our beliefs and values to be respected — anyone in the club, to be listened to and heard, and not silenced just because we’re not what the majority thinks,” Welsh said.

“She definitely aligned with a lot of my beliefs,” Welsh said. “I felt in her class that I could really write in my papers how I personally felt about issues because I knew she wasn’t going to silence them.”

To be an approved club on campus, the first step is to email the acting ASB Director of Student Relations (which is Moses for the 2020-2021 academic year) with the idea of the potential club. The director will then send club documents including an advisor sign-up sheet, advisor agreement and an advisor handbook.

For approval, there must be seven founding members who want to be in the club, but not all seven need to hold a leadership position in the club.

“The point of having seven members is to show this is a club in which people are interested in and that it’s not just one person’s hobby that they’re trying to start up,” Moses said.

A mission and goals sheet outlines what the club founder wants to accomplish and what they will provide for the student body. The final element is a constitution, which states the club’s bylaws and how they would elect officers. The club president decides what goes into their constitution.

Upon submitting the paperwork to the Director of Student Relations, the director will review the documents and can confer with the Director of Community Life, Scott McGowan. Moses said McGowan doesn’t have a final say in club approval, but acts as an advisor.

“If I can’t come to a decision on whether or not a club should happen, I’ll talk to the ASB Board of Directors to get their opinions and make sure it’s not any biased decision on my part,” Moses said. “But at the end of day, it’s the ASB’s Director of Student Relations’ decision.”

There is currently no appeal process for denied clubs, so TPUSA would have to re-apply when a new Director of Student Relations is elected. The ASB Board of Directors start working in the summer, so the next application time is June 15.

“If I feel either a club or the overall organization that a club is chartering doesn’t fall in line with the mission statement, then that’s a reason to decline it,” Moses said. “We’re trying to uphold PLNU’s beliefs, missions and values.”

“ASB said our club is offensive but not in the sense that we’re offending people, more in contrast to being defensive,” said Welsh. “For example, because TPUSA has the Professor Watchlist, and it’s very known for the things they say and being very bold. I think that’s something ASB had a problem with.”

Welsh said a text conversation occurred between Hannah Nelson, who would have been TPUSA’s club president, and an unidentified member of PLNU College Democrats. According to Welsh, Nelson asked if the two clubs could participate in a discussion about their different beliefs. There was some hostility in the conversation and an agreement was not reached.

In addition to the PLNU College Democrats, other political clubs on campus include PLNU College Republicans and Young Americans for Freedom. All three clubs were approved by previous directors of student relations.

“We just find it very upsetting that the school would fund a club that has officers that would tell us that our beliefs are detrimental to society and shouldn’t be talked about.” Welsh said. “I just think they’re [ASB] not giving us a chance, and we’ve promoted ourselves where we want to open up conversation and be respectful of all beliefs, and educate people as to what the conservative side really is.”

Welsh said TPUSA will be a Point Loma activist hub and operate without being affiliated with PLNU.

She said, “It’s definitely something that we’re going to continue to fight for because we’re not going to take no for an answer.”