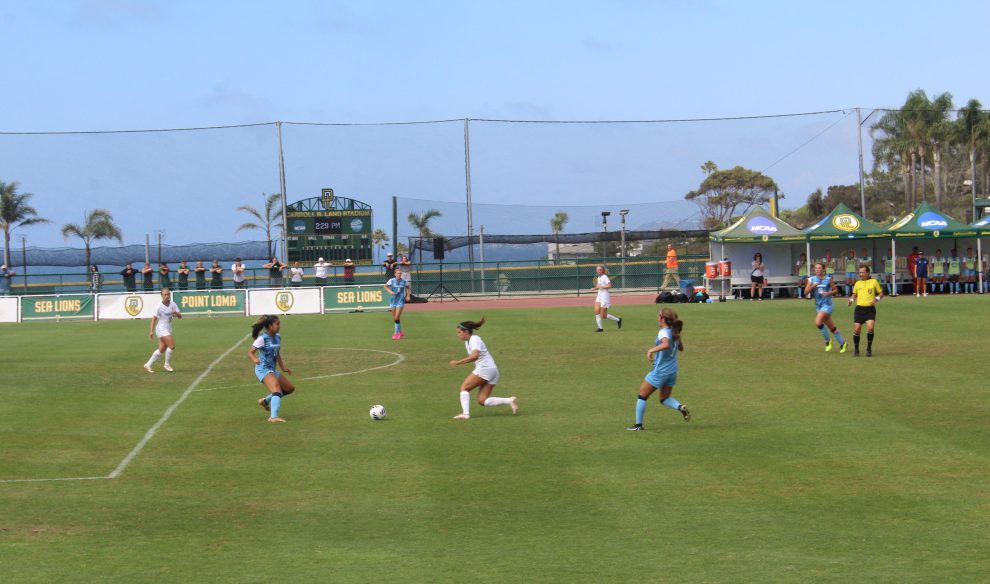 What defines a dynasty? Is it championships? Winning percentage? Consistency? No matter how you look at it, the Point Loma Nazarene University women’s soccer program fits the mold. Without a losing season since 1999, a year in which the Sea Lions finished 7-8, women’s soccer has been the most consistently elite program on campus for over two decades.

Sustained success in athletics is more than an accumulation of talent. Take the University of Texas at Austin’s football team for example. Each year the school attracts some of the highest-rated high school prospects in the country, yet they have zero conference titles since 2010 to show for it. PLNU women’s soccer head coach Kristi Kiely highlighted the team’s culture, rather than their conference-dominating talent, as the device most crucial to their winning ways.

“Our players are on the same page with who we want to be: a group that demands much from each other and cares about each other in deep and meaningful ways. We keep our focus on that,” Kiely said.

Since Kiely’s arrival in 2018, the Sea Lions boast a 53-10-7 record with three PacWest Conference titles to go along with that .807 winning percentage (no PacWest Champion was named during the shortened 2020 season in which the Sea Lions finished 4-0). Consistent and unwavering dominance will quickly make a name for a program; however, this can just as quickly put a target on one’s back.

“Each team we play seems determined to give us their best — a challenge we welcome. The best that others bring requires our best every time we step on the field,” Kiely said.

It is Kiely’s high standards and steadfast leadership that fifth-year goalkeeper Rachel Fong credits much of their dynasty to, citing the foundation of their winning culture as hard work, accountability and pushing each other to get better each day.

“One of the major reasons our program has been successful every year is because of our head coach Kristi Kiely,” Fong said. “Kristi came in five years ago with goals for our program and has worked hard to achieve them. She established the culture we have currently and works hard to continue to improve our team.”

As far as a great coach can take a program, success to this level takes more. On a team with the majority of the players classifying as first or second-years, Fong mentioned a group of five veterans that have both the familiarity with the collegiate game and life experience to help guide their younger teammates.

“We have a really good dynamic and wide range of experience. All of us had at least one season before Covid hit, which helps give us an understanding of what a “normal” season should look like and how to navigate it. Between the five of us, we also have a total of four ACL tears, so we know what it’s like to be in the injured players’ shoes,” Fong said.

The youth on this year’s roster has contributed to a more fluid situation in terms of starters. Kiely explained that because of the team’s younger average age, they have yet to start the same group regularly; however, eight of eleven primary starters have “played a lot of minutes in recent years and therefore, gained important experiences along the way.”

Although this year’s squad may be much younger, and the starting lineups vary, the goal remains the same: Get a little better every practice, every workout, every game, every day.

The Sea Lions will look to showcase the type of results their strong locker room culture brings on Oct. 12 at 4 p.m. in La Mirada as they take on Biola, looking to improve on their 7-1-2 record.