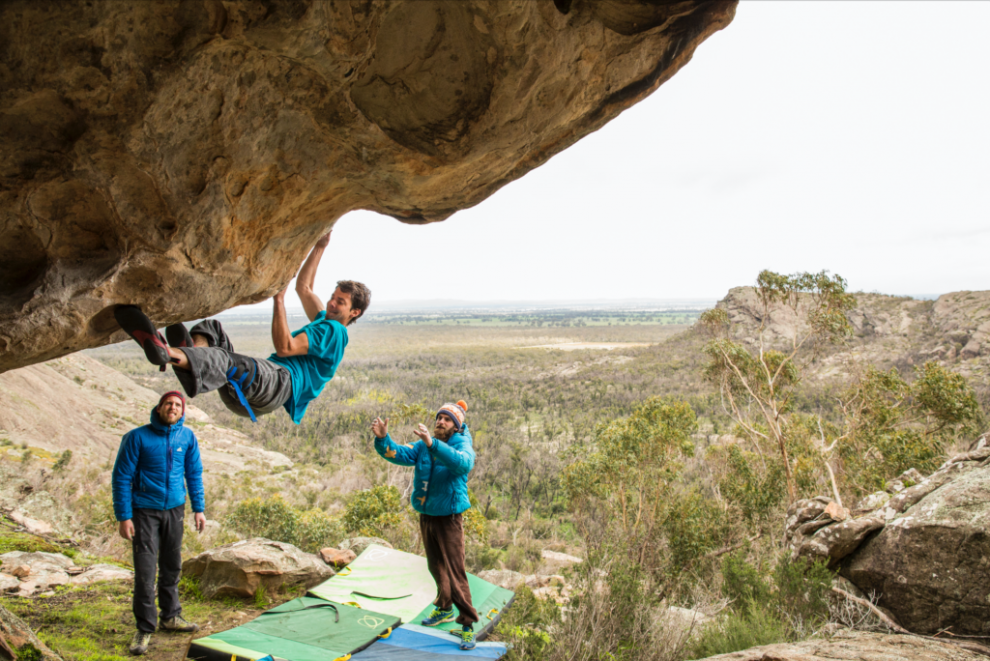 It is not an easy task to find a sport that’s still being developed. Many have been around for hundreds of years, and though sports are constantly innovating, the sports themselves are pretty much set in stone. However, there is one sport that has just started becoming more popular and is definitely still in a place of development despite it being around for at least 100 years.

Bouldering is this sport. Bouldering is not typically what people think of when they think rock climbing. While it has the same general concept–climb the rock and don’t fall–it does not use ropes or harnesses.

Reed Bovee, who has been climbing for 5 years, says he prefers bouldering because, “I don’t like being restricted by a rope…[and] it [bouldering] feels more freeing.”

Another advantage is that the only real equipment needed is rock climbing shoes and a nearby climbing gym, according to Bovee, or the great outdoors. This makes the sport both accessible and affordable to newcomers and veterans alike.

Other than the accessibility, climbers say that there are many other factors that drew them into climbing. The community is something most rock climbers admit as the main reason they keep coming back.

Liam Wynn, founder and host of rock climbing podcast Vertical Thoughts, said that rock climbing is “ barely even a sport… In the past, it was more of a lifestyle if anything because when you rock climb you tend to become a climber. It tends to be sort of consuming in many ways.”

Justin Bacher, an employee at Vital Climbing Gym, gave his perspective on what this unique lifestyle looks like.

“It’s not the same kind of competitiveness as other sports, other climbers just want to learn from another climber, everyone is just extremely encouraging,” Bacher said. “[It is] just a very helpful and happy [community].”

This culture of friendliness and support that Bacher describes as another major draw for climbers. Bovee’s mindset when climbing is to be the best he can be, and although bouldering is not a team sport, the community makes it feel like a team without the focus on competing against others.

“Climbing is really non competitive… you can only compete with yourself when you’re climbing,” Wynn said.

While competitions do happen, the vast majority of climbers tend to treat it as a place to go and have fun with friends. Bacher said during his first competition, he went in half-heartedly but ended up enjoying himself, and he said that it boosted his motivation to climb and was glad to have his friends there.

Climbing is a sport still evolving. Rock climbing is something that, until recently, was more of a novelty to the public with only a few gyms and those “little climbing walls at the fair” Bacher said. Recently there is more of an emphasis on competitions and, according to Bovee, gyms try to keep up by creating more climbs that emulate this style. Bovee said that this style involves more parkour elements with the goal of making it more entertaining to watch.

Wynn predicted that climbing will definitely become more popular over the upcoming years with both gyms and outside areas for climbing continuing to fill up. There are lots of different opinions on whether or not this is a good thing.

“Many climbers don’t want to see the outdoors be further developed, you’ll get a lot of push back from the community,” Wynn said.

It is the responsibility of the existing community of climbers to share climbing with newcomers “since they love it for the same reasons that we love it,” Wynn said.

There are so many different ways to climb and different ways to enjoy it, which is part of what makes it appealing to so many. Whether bouldering or climbing with ropes, whether climbing alone, with a partner or as a part of a larger community, climbing provides options for all to enjoy.