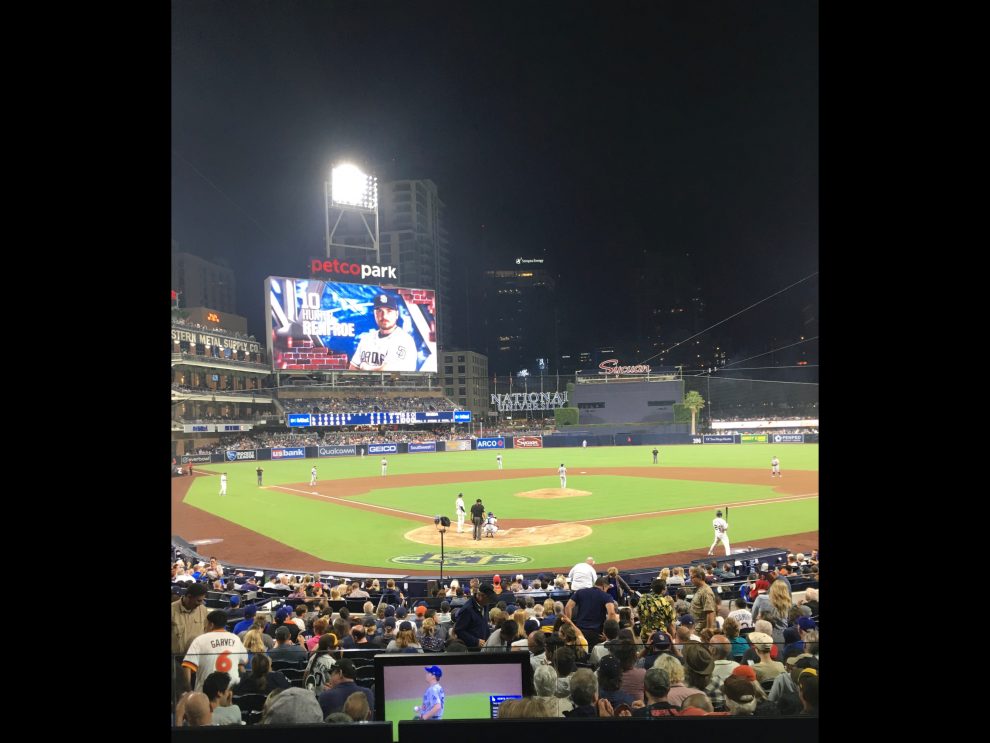 Hadley Wood is a professor emerita of French and literature at PLNU. She is also a huge fan of baseball and the San Diego Padres. With the Padres qualifying for the postseason for the first time in 14 years, The Point conducted an email Q&A with Wood to learn about her fandom.

Andrew Hansen, The Point: How did you become a baseball fan and how did you first become a Padres fan?

Hadley Wood: I grew up in St. Louis, a big baseball city, and in a baseball family. We didn’t go to lots of games because we weren’t rich, but we followed on the radio and would go once or twice a year. My mother taught me to score games and that helps teach you strategy. I was watching greats like Stan Musial, Enos Slaughter and eventually Ken Boyer.

I moved to San Diego in July of 1976 but didn’t get interested in the Padres until their first World Series run in 1984. It wasn’t love at first sight, but over time my devotion to the team grew. As a small market team, they are always David to the Goliaths in Los Angeles, Chicago, San Francisco and New York. The Padres play with heart and grit.

AH: The Padres have not made the playoffs in 14 years, have not won a playoff series in 22 years and have never won the World Series in their franchise history. As a long-time fan, has it been difficult to support the team through these struggles?

HW: I feel that the Padres are the perfect team for a Christian since Peter tells us suffering is good for the soul and builds character. I have a lot of character, thanks to the Padres. I used to think of the Padres as the Cubs West, but then the Cubs won the World Series.

AH: Is there a memory of Padres heartbreak you have?

HW: I have two heartbreak memories. First, a team heartbreak moment. I was present at the last World Series game in 1998 when the Yankees swept us and took their umpteenth title. I was in the stands as the team left the field. I stood along with everyone else and cheered the amazing players who had played their hearts out and given us a wonderful year. The players disappeared into the locker room, but we kept standing and cheering. Eventually, Trevor Hoffman, I believe, realized the fans were still cheering, and he persuaded the rest of the team to go back out on the field, even though they were broken-hearted.

My second heart-break is more drawn out. I have hated seeing the Padres move away from real baseball. I love a great pitching duel. I love watching a team manufacture a run: walk, steal, single, sacrifice. Baseball isn’t the home-run derby played over and over. It’s about doing the basics and doing them well. Watching them abandon that pattern since Bruce Bochy left was heart-breaking for me. Seeing them return to good solid baseball this year has been pure joy.

AH: Dean Nelson mentioned you have season tickets for the Padres, so how many games do you typically go to in a season (when fans are allowed) and what has that experience been like?

HW: I have had season tickets since 1996. I only have a half-time season subscription, so that is about 40 home games. I think that is just about the right number of games, [and] I also enjoy going to Spring Training games. I have seats on the upper field level on the first-base side. I have gotten to know the ticket holders to either side, all of whom are big baseball fans, so we talk a lot about the play, the stats, the coaching decisions and more.

Baseball can indeed be a communal event, and I’m not talking about the Wave or hitting a beach ball around the stadium. At the end of the 1998 season, we tried to re-sign Kevin Brown, the ace pitcher who had helped take us to the Series. He refused, but made it clear that it wasn’t about the money. He just wanted to be closer to his family in Atlanta. He then signed with the LA Dodgers for a longer contract and more money. When he appeared in San Diego in a Dodgers uniform, the fans were more than willing to let him know they didn’t like being lied to.

When he came onto the field, many of the fans in the field level were waving one-dollar bills at him and the loudspeaker was playing the Beatles, Money Can’t Buy You Love. Fans booed every time he threw a strike and cheered every time he threw a ball. By the third inning, we needled him so much he unraveled and had to be taken out. He left to fans cheering as the loudspeaker played Leaving on a Midnight Plane to Georgia.

Being part of a San Diego and baseball community is a wonderful counterpoint to the work I did on campus. When things don’t go well in a class, in my department, in a faculty meeting or on campus in general, I am careful about what I say, knowing there are a variety of different feelings within the community. But when something goes wrong in a baseball game, it is perfectly acceptable, normal even, to say something rude at the umpire or the other team.

Several years ago, I attended a Padres-Dodgers game. We were in last place in the NL West and the Dodgers were just ahead of us. We beat the Dodgers, thereby putting them into last place. As we left I heard a Padres fan cheering: “L.A. … S  T!” Saucy, sassy, clever and fun to be part of.

AH: What are your expectations for the playoffs this year? Do you think this could be the year they win the World Series?

HW: I think (hope) every year is the year we will win the World Series. This year my hopes have more behind them. But like every fan, I worry. Will Tatis remain healthy? What about Paddack and Clevinger? Will our relief pitchers have enough rest to come back fresh? Is the team psychologically ready?

AH: Who is your all-time favorite Padres player?

HW: The greatest Padre ever is, hands down, Tony Gwynn. But my favorite goes to someone who played with greater visible passion — Ken Caminiti. He did everything at 120% and was thrilling to watch. I loved his passion, his intensity, his fire. In one game, he stopped a hard-hit line drive, but the ball came so fast and hard it knocked him down. He managed to grab the ball but didn’t have enough time to get to his feet and make the throw. Instead, he rolled to a seated position and from a seated position, he threw from third to first, right on the money and got the runner out. What that intensity did to the rest of his life was heart-breaking. [Caminiti died of a drug overdose in 2004.] The players who combined passion with inner discipline (Gwynn, Finley, Hoffman, Klesko) all fared better. But Achilles is the hero of the Iliad, not Hector, and I loved watching Caminiti.

Do we have a new Achilles on the team? Is it Tatis? Machado? Only time will tell but I can’t wait to find out.