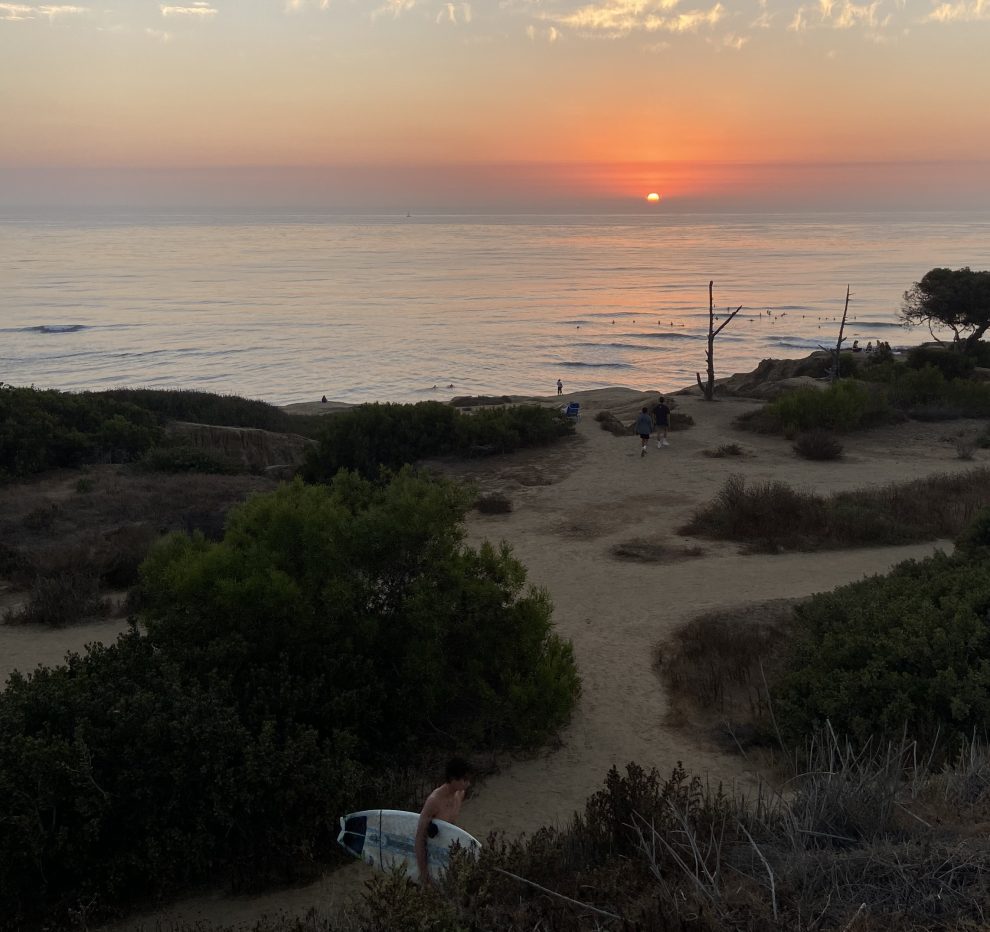 Coming off of a good surf can feel like conquering a beast. Sometimes, I’m on the top of my game. I sit in the perfect position, catch a plethora of waves, don’t have to paddle much and duck-dive exceptionally well. These perfect sessions don’t come around very often. Most sessions are rather mundane and maybe include one or two good waves. Sometimes, they are worse than that. Sometimes, the ocean conquers you.

Since returning to school, I’ve had two sessions that have left me in reverence of the ocean. The first session was on a particularly hot day when sitting in my room became torturous. I checked the waves and they looked surfable, so I called my friends and we decided a surf was necessary more due to the heat rather than the quality of the waves. I threw on my trunks and walked down the cliffs. The tide was a little higher than expected, but I have surfed plenty of good waves at high tide before so I was optimistic.

So I paddled out, and noticed the pattern of the swell was increasingly unpredictable. Multiple head-high, mushy peaks suddenly surrounded me. I was able to duck-dive them but it got old quickly. Finally, seeing a wave come my way I decided to take it. Now, this was a weird wave. It was probably a shoulder to head high mushy wall of water with howling onshore wind having its way on the shape of the wave. For those who don’t surf, onshore wind is bad for waves because they ruin the shape of it. Then mushy waves are usually waves with little to no power. I sped down the seaweed ridden face and analyzed the wave as I went over several bumps. Enthralled and distracted with the weirdness of this less than perfect wave, I turned my head to my left and saw my friend paddling out directly in my line. I had trouble engaging a turn on the wave, forcing me to bail out and save my friend and, more importantly, my board. Thanks to my friend, I was now left in the impact zone of these confusing waves. I took several on the head until I decided that it wasn’t even good enough to keep fighting the beast that is the ocean.

For my second session, the waves were good. The tide was going down and the sub-bowl left was getting cleaner by the second. I frantically threw on my wetsuit and paddled out. It seemed that the rest of the greater San Diego area had the same idea. Coming from Hawaii, I felt like I had seen my fair share of crowds in the water, but that was nothing compared to California. The best surfers sat on the beautiful peak on the left. I’m usually not the kind of person to try to stake my place in the lineup, so I settled for the right. I caught several waves but every one was short and lacked any power or form to allow me to do any turns or cutbacks. I frustratingly paddled over to the left inside bowl, hoping to get a decent wave. Finally, a peak came my way. I paddled for it, stood up, looked to turn left and another surfer was going left right in front of me. I audibly sighed as I stubbornly turned my board to the right only to find a laughable excuse of a wave. I decided that it wasn’t my day, and as I made the shameful paddle back to the cliffs, I quietly cursed at the ocean, my board and myself.

After most sessions, I stand out in front of the cliffs (or beach) to watch the waves I just surfed. If it’s a good session, I usually watch in a thankful manner. If it’s a bad one, in a frustrating or fearful fashion. The more I surf, the more unforgiving the ocean has become. I constantly think about catching a better wave until it practically consumes me. It corrupts my dreams. Long stints without surfing can make me irritable. However, the ocean very rarely gives me what I want. It mocks me. The waves are a beast that don’t seek to be tamed. Any misstep and the wave will make you pay. The many hateful acts of the ocean are often juxtaposed against a few perfect waves making every wipeout, hold down and brush with death worth it. I’ve formed a sort of respect for the ocean. If it allows me to even have one good wave out of a hundred waves, I’ll never stop coming back to chase the high I get from surfing.