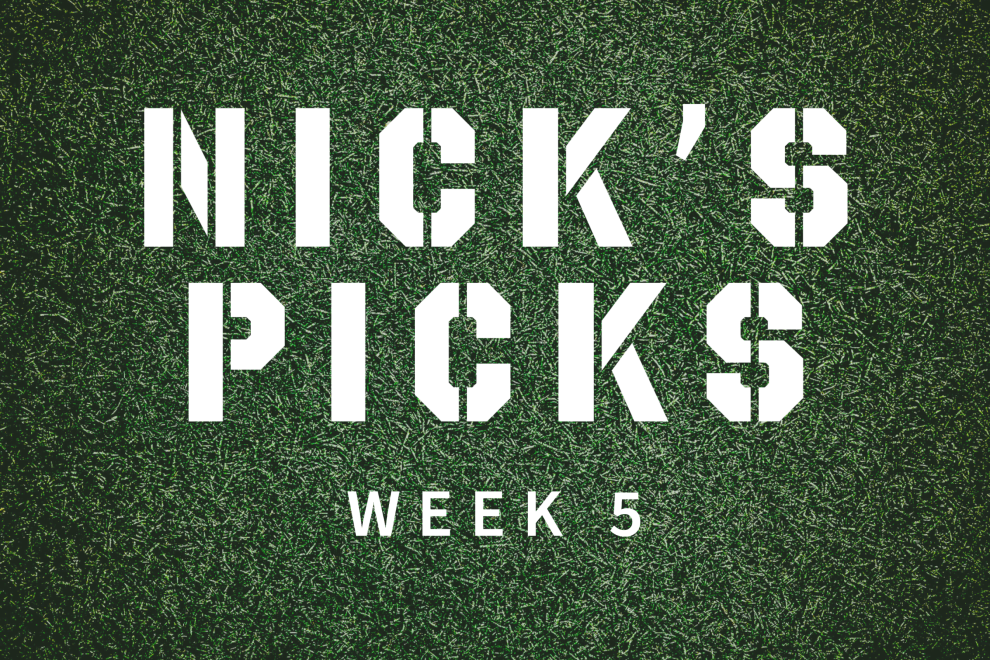 It is time to get serious about your fantasy football teams. Four weeks down and still 14 to go, but these are the make or break weeks. Some managers may have already fallen to 0-4 or 1-3, and the losses have got to stop there. The coming weeks will set the average teams apart from the great ones. No need to worry though, Week 5 of Fantasy Football Advice is here to get you back in the win column before there’s no coming back.

Seattle’s faithful fans were devastated this offseason when their franchise quarterback, Russell Wilson, finally chose to take his talents to another team. Things looked dire in Seattle with their two options being a young, immature Drew Locke and a potentially washed up Geno Smith. Four weeks later, and we’ve learned that Geno Smith (31.7 points) is anything but washed up. My top “sleeper” quarterback for Week 4 had his best game of the season, and you should continue to use him until this hot streak ends. Trevor Lawrence (5.66 points) found his way back into the “sleeper” conversation after back to back solid performances. The Eagles’ defense proved to be too much to handle for the young quarterback as he turned the ball over five times, and those turnovers ended up destroying his fantasy value. Don’t count Lawrence out just yet, but maybe give him a week or two before putting him back in your starting lineup.

Zach Wilson (vs. Dolphins): After missing the first three weeks due to injury, the second-year quarterback returned in Week 4 in the Jets’ win against the Steelers. The Jets stressed that they wanted to run the ball more, and they were able to do so with Wilson under center. The mobile quarterback kept the offensive at a fast-paced tempo, and it proved to be the difference in his team’s Week 4 win. Wilson’s Week 5 matchup finds him facing the Dolphins at home, and Miami’s defense is currently giving up the second most fantasy points to quarterbacks. He is in a favorable position to have another solid week.

Ryan Tannehill (vs. Commanders): This isn’t the first time a quarterback who has to face the Commanders has been picked to be a “sleeper.” To put it simply, Washington’s defense hasn’t been effective against quarterbacks in the past and they still aren’t today. Tannehill has had two solid weeks after an ugly Week 2 performance, and could be in line for a third good week. He is available in 85% of ESPN fantasy leagues, and could be worth picking up as a backup or potential starter if you are in desperate need of a quarterback.

Sit or Start: Last week I picked Matthew Stafford as someone who needed to find a spot on your bench. He hasn’t proved to be the same Stafford from last year, and Week 4 was another example of this case. He put up 6.67 points and will be my main pick to sit for another week. I’m also picking Derek Carr as someone who needs to be sat in Week 5. He has been inconsistent of late and I see Kansas City dominating every aspect of their upcoming game.

Both of my “sleeper” picks at the running back position were players who were next in line after the guy playing in front of them went down with an injury. One player flourished; the other, well not so much. Alexander Mattison (8.8 points) had an excellent Week 3 after teammate Dalvin Cook dislocated his shoulder. Many expected Mattison’s workload to increase with Cook banged up, but Cook still dominated the playing time in Week 4. Mattison had a good game, but not a great one, and clearly has little fantasy value if Cook is involved in the game. Jamaal Williams (23.9 points) was far luckier than Mattison, considering his counterpart D’Andre Swift was ruled out for Week 4. The absence of Swift gave Williams the chance to flourish, and in the highest scoring game of the week, he did just that. Williams ran for over 100 yards and collected two touchdowns, so as long as Swift is out with injury, Williams is a must start player.

Tyler Allgeier (vs. Buccaneers): The “sleeper” picks are beginning to follow a pattern each week. The best players to pick up are guys whose role has expanded because someone else got hurt. Just like Williams, Allgeier’s playing time is about to significantly increase in Week 5 with his teammate Cordarelle Patterson out with injury. When Patterson left the game with a hurt knee, Allgeier took off. He had 11 total touches for 104 yards, and he’ll be called on plenty of times in his Week 5 game. He’s still available in 83% of ESPN leagues, but has a high demand and won’t be around for much longer.

Nyheim Hines (vs. Broncos): For those familiar with the Colts’ depth chart, you probably rolled your eyes while reading Hines’ name in my “sleeper” category. The Colts’ top running back, Jonathan Taylor, was the number one draft pick in most leagues this season, so choosing Hines as a “sleeper” sounds foolish. Don’t be alarmed, I have my reasons. Despite Hines not being involved much in the offense with Taylor rarely leaving the field, this may be the week that all changes. Taylor hurt his ankle in Week 4, and the Colts’ Week 5 matchup is on Thursday night rather than Sunday. The quick turnaround may require Taylor to sit out Week 5, or at the very least, surrender some of his playing time to Hines. This could be the week Hines forces the Colts’ coaching staff to give him the ball more.

Sit or Start: Week 1’s top “sleeper” running back was Antonio Gibson, a player infamous for either pleasing fantasy managers or disappointing them with little to no points. His Week 1 performance gave those who owned him hope that this was his year to solidify himself as Washington’s top running back. Sadly, he hasn’t been able to come close to his Week 1 stat line, and it may be time to sit him. Gibson has been a familiar face in my lineup since his impressive first game, but even I will be taking him out of the lineup, and you should too.

It was a rough Sunday night for the Tampa Bay Buccaneers, but it was an especially rough one for receiver Russell Gage (4.4 points). A week after being Tom Brady’s go-to pass catcher, Gage only had two catches. This was largely due to three of Tampa Bay’s receivers returning from injury, but nevertheless, some were hoping Brady would look to pass to Gage heavily in back to back games. It looks like Gage shouldn’t be considered for a starting role in your lineup when Tampa’s receiving core is healthy. In Week 3, fans saw Zay Jones (0 points) reel in a career high 10 catches. After dealing with an ankle injury all week, Jones was deemed good to go the morning of Week 4’s games. Unfortunately for those who had picked Jones up off waivers, he ended up not playing, which means we’ll all have to wait another week to see if he can match his Week 3 performance. It may be wise to keep him on the bench this week, and if he continues to thrive, Jones could be a potential flex option in future weeks.

George Pickens (vs. Bills): In Week 3 the NFL world saw Pickens make one of the greatest catches in recent history, and then in Week 4, the rookie had just over 100 receiving yards. Pickens is beginning to live up to the hype, and if he is still on your league’s waivers, it is time to snag him. The Steelers have also turned to their rookie quarterback, Kenny Pickett, who seemed to like throwing to Pickens in the two quarters Pickett played in. Pickens is only claimed in 37.6% of ESPN leagues, so there’s still a chance of picking him up while he remains under some managers’ radars.

Devin Duvernay (vs. Bengals): Oh no, not a Ravens wide receiver finding his way into the “sleeper” conversation. An offense that revolves around quarterback Lamar Jackson using his legs makes Baltimore’s receivers unappealing to fantasy managers. Despite being under less than ideal circumstances, Duvernay is thriving alongside Jackson in Baltimore. He has remained active in the offense all season, and is averaging 13.3 fantasy points a week. Duvernay is available in 80% of fantasy leagues; pick him up before Jackson starts relying on Duvernay so often that he becomes a sought-after receiver for fantasy teams.

Sit or Start: A disappointing Week 4 performance may keep fantasy managers who have Drake London on their team from starting him in Week 5. I would persuade you to not let one week scare you away from London. The rookie has been Atlanta’s top option on offense all season, and one game won’t change that. Especially with Cordarelle Patterson out, Atlanta will need London to pick up the slack. London is a definite start for Week 5.

The first couple of weeks set some fantasy teams apart from others. Now these next few weeks will solidify teams in their spots in the standings. Injuries will happen, but it is how you react to those changes in your lineup that decide the success of your team. If your team is struggling, use the players on the waivers to fight your way back to the top of the standings. If your team is sitting pretty heading into Week 5, that’s great, but don’t become complacent. Continue to monitor your bench players, and make sure there aren’t better options available on the waivers. These next few weeks will decide a lot in your fantasy leagues, so good luck in Week 5 and thank you for tuning into another week of fantasy football advice.