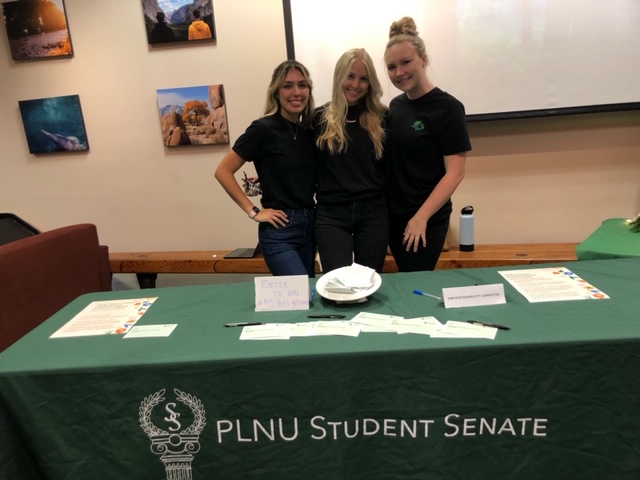 As a substitute for taking a written final, professor of business Robert Gailey of Point Loma Nazarene University collaborated with his students enrolled in the course to create an event that would impact the lives of more than just those sitting in his class. Inspired by the success of the Young Outside event that took place a couple months ago, Gailey contacted Brennan Ziegler and Gracie Hinz, both third year students and leaders of the Loma Outside club that promotes outdoor adventure, to help plan a similar marketplace event geared toward sustainability. After much planning, the event became a reality on November 16th, as over 150 students filled the ARC to participate in the first ever sustainable marketplace event.

Gianna Piva, third year environmental studies major, was another one of the many students that helped make the event possible.

“We wanted to create an event for sustainable vendors to bring people together and encourage sustainable thinking. Environmental issues can be touchy to talk about, but creation care is so important to study,” said Piva.

Students in the class picked a sustainable brand in San Diego and contacted them to see if they would be interested in joining the event. The booths touched on topics from growing your own vegan and plant-based foods, to thrifting recycled clothing, to bringing awareness to more sustainable living options.

One of the businesses that attended was called Soul Much Foods, a sustainable company on a mission to eliminate food waste one cookie at a time.

“Working as waitresses in the restaurant industry, we became frustrated witnessing perfectly untouched food being thrown away each night. We were wondering why nobody else was stopping this from happening. Then we realized, we are that somebody,” said Soul Much Foods founder from soulmuchfoods.com.

Reyanne Mustafa, Kristian Krugman, Dakota Ruiz, and Lexi Oplinger saw an opportunity to build a movement and educate the world about food waste. Using oversupplied food products such as cooked brown rice, quinoa, and organic juice pulp to name a few, they created a sustainable cookie brand. Their hope is to show the community that profit and purpose can be two players on the same team by turning rescued food into delicious cookies.

Gabi Egan, junior environmental studies major and member of the ASB sustainability committee, believes that a sustainable lifestyle is attainable for everyone.

“Our mission is to make Point Loma a more sustainable campus. We’re trying to work more with the students to make them aware of the benefits of living sustainably,” said Egan.

Egan and her team are partnering with PLNU’s cafeteria to make sure students are getting the best food options possible. She also explained the importance of finding alternatives to fast fashion, which often overwork and underpay the laborers, and encouraged students to bring their own mug to Bobby B’s, which reduces the use of plastic and saves money.

“When people think of living sustainably, they think it is a total lifestyle change. We want to bring sustainability to campus to make it more reachable,” said Egan.

For students wanting to enter into a more sustainable lifestyle, Micah Lohman, senior business administration major and operator of the herb planting booth, offers some words of encouragement.

“Maintaining consciousness in everyday behavior is the first step. It starts with the little actions,” said Lohman.

Around 150 people attended the event who were given the opportunity to engage in conversation about sustainable living. Dr. Gailey says that change starts from within, and influence is a strong force for even greater change.

“We are told that this is the world we live in, but when we believe that, we miss out on opportunities to change for the better. The first step is to realize that you don’t have to do it by yourself. You just have to say I’m going to make a slight change,” said Gailey.

Live Green, Just Do It

Voting is Still Happening on Campus: Your Guide to ASB Constitution Changes
Student Vendors Reflect on Roots of Giving

Live Green, Just Do It