The 56th Super Bowl that took place in Los Angeles came with many breathtaking plays, as well as breathtaking injuries. The most prominent of the injuries occurred when the Los Angeles Ram’s star wide receiver, Odell Beckham Jr., went down with a non-contact injury to his left knee after dropping a pass. This was the same knee that suffered a season-ending ACL tear in week eight of the 2020 season.

Medical professionals who watched the game determined that the fall was very concerning and could quite possibly be déjà vu for Beckham’s knee. Point Loma Nazarene University’s Assistant Athletic Director for Sports Medicine, Shawna Baker, agreed.

“It was an ACL tear,” Baker said. “His foot got stuck when he came down. His momentum pushed him forward which caused his tibia to move forward as well.”

Baker explained how the turf was the major cause of this injury, as injury rates for ligament tears have significantly increased during collegiate competitions on artificial turfs.

“He got stuck in the turf,” Baker said. “He suffered anterior tibial translation due to his body moving forward from the stopped position.”

Both quarterbacks, Matthew Stafford of the Rams and Joe Burrow of the Bengals, also had potential injury scares. Stafford was seen grabbing his leg and limping off of the field with less than four minutes to go in the third quarter after D.J. Reader of the Cincinnati Bengals sacked him and landed on his left ankle after the hit.

Baker initially thought it was a lateral ankle sprain due to the heavy pressure on Stafford’s leg. The pressure caused a forced inversion movement of the ankle, leading to the ligaments being slightly torn.

What the steps would be if this happened to a PLNU athlete mid-game?

“A sideline assessment right after you have an injury is one of the best things you can do. When we can get hands-on and do the special tests, we can determine if there’s a high probability of injury in the particular structure that’s involved,” Baker said.

Baker explained that if there’s extra movement in the ankle, that tells that there is a prominent injury to a certain ligament. The type of pain, where the pain is, and any prior history of injuries of an athlete are also key in determining the diagnosis.

Joe Burrow was also seen grabbing his leg after being sacked with 12 minutes to go in the fourth quarter and even needed assistance getting off of the field. This was particularly nerve wracking for Kami Duran, a Cincinnati Bengals fan and first-year PLNU student.

Duran recalled when Joe Burrow tore his ACL and MCL after getting sacked in week 11 of the 2020-2021 season when the Bengals went up against the Washington Football Team.

“It was terrifying,” Duran said. “We had just drafted him with the number one pick and that one hit could have potentially ended his career.”

Burrow would return the next season, however, and lead the Bengals to a 10-7 record as well as their first Super Bowl appearance in 34 years. Burrow had a few injury scares during the regular season of this year and only had to sit out the last game of the regular season after suffering a grade one knee strain in his right knee during week seventeen against the Kansas City Chiefs.

That same knee was the one that Burrow was seen grabbing after his collision with Rams defenders in the fourth quarter of this weekend’s game.

“That made my heart drop,” Kami said. “I really thought he was out for the game. Him grabbing that knee just felt like something terrible happened, when anyone grabs their knee like that you automatically assume the worst. I can’t believe he came back.”

Both quarterbacks would return on their next respective drives and finish the game. According to Baker, PLNU athletes would take a similar approach.

“You have to do an assessment to see if they are functional. If they can walk and bear weight, then yes,” Baker said.

Baker explained that the process is very quick because there are doctors and other medical professionals who are always on standby.

“They have a pretty good idea of what’s going on,” Baker said. “The athletes are usually brought to a table or into a tent to determine if they can or cannot return to action.”

Sydnie Martindale, a first-year student at PLNU, is very familiar with this process. A couple of years ago she suffered a significant injury in a cheer competition.

“I was coming down from a stunt and my head collided with my teammate’s shoulder,” Martindale said.

Martindale finished the routine, but fell to the floor and couldn’t move after. Her coach had to assist her off of the floor and she was immediately seen by medical professionals who were on standby.

“Those doctors potentially saved me from suffering a traumatic head injury,” Martindale said. “They got to me so quickly and performed the right procedures to assure my safety, I can’t believe I only walked away with a concussion.”

Medical personnel are crucial for teams in any area of sports, whether that be collegiate or professional.

“The health and safety of students has always been our number one priority,” said Baker. “The faster we get to them, the faster we are able to determine the diagnosis. We’re always on the sideline prepared for anything to ensure that our students remain safe in their particular areas of competition.” 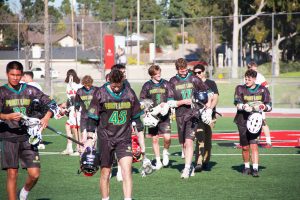