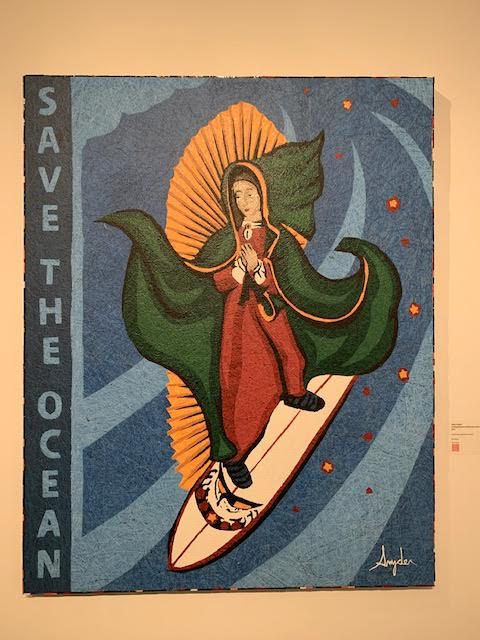 Vandalism as art? The pristine, white walls of the Oceanside Museum of Art are now sweeped head-to-toe in what some may label as a form of defacement as the museum opens its doors to a new street art exhibition. The exhibition, curated by PLNU’s Dr. G. James Daichendt, opened on Saturday, Feb. 15, and will be open until June 21. Daichendt is a professor of art history and has written several books on street art and graffiti. The exhibition, called “Sidewalk Activism,” focuses on how street art is used as a platform for activism and social commentary, featuring work from well-known artists such as Shepard Fairey and Robbie Conal.

The museum, bursting with bright colors and bold messages, is filled with pieces that center around the exhibition’s three categories for practicing sidewalk activism: emotion and beauty, humor, and manipulation of media. When it came to the process of curating such an exhibition, Daichendt said, “The process of selecting artists starts with forming a concept and then through a series of conversations, research, and debate with museum staff, and a variety of professionals. I was able to narrow down my list into a comprehensive show that touches upon the aspects I hope to highlight.”

From the bright blue lettering of “Save the Ocean” beside the image of a “Surfing Madonna” by Bryan Snyder, to the sculpture by artist Plastic Jesus, of a giant rolled up 50 dollar bill with two rows of cocaine and a credit card reading “American Excess,” and the grotesque images of Conal’s “Cabinet of Horrors,” there is no avoiding the conversations that each piece demands to have with its viewers.

“Street art, like most art, is an artifact that employs beauty to comment on issues that are important to the artist,” said Marvin Milian, an art history professor at PLNU who was also there for the exhibition’s opening night. “The ‘punk’ nature of street art lends itself to a dialogue rich in humor and emotion. Street art highlights those that feel abandoned and forces a social commentary amongst circles that often ignore what is clear to most.”

Milian hopes that those who come to see the exhibition leave with a consideration of street art’s role in politics, pop culture and social topics. “These are often issues that ‘higher’ forms of art tend to shy away from.”

To some, street art is a form of graffiti. To others, it may have evolved from such, but has now grown into its own higher art form. Graffiti, which is more letter based, began primarily for tagging. While street art, with its more pictorial forms, is used to convey a deeper message, said Milian. “Street art was born in impermanence and lives in mystery.”

“Someone might argue, an illegal painting on a wall looks better than a legal white wall,” said Milian.