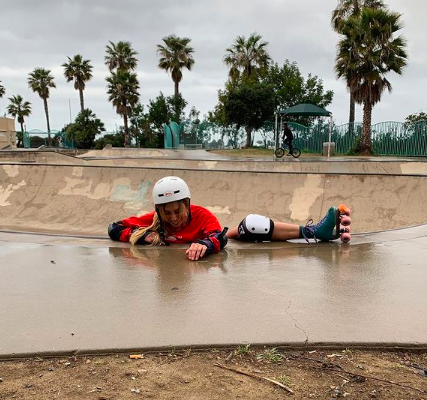 Giselle Hart has made it her personal mission to get all friends on wheels. Hart, junior marketing major at Point Loma Nazarene University, has been roller skating since 2014. When Heart turned 19, she got her own pair of skates, which sparked a new interest for her in the sport. Now about to turn 21, Hart owns six pairs of skates and practices every day at Robb Field Skate Park in Ocean Beach. As much as Hart enjoys skating, she’s found it hard to embrace her identity as a “skater girl” amid all the “skater boys.”

According to Hart, the demographic of the OB skatepark consists mostly of teenage boys. Hart said, “I’m usually one of two or three girls at the skatepark when I go. More often than not, I’m the only girl there.”

For Hart, it wasn’t her skill level that kept her away from the skatepark for so long, but the intimidation due to the lack of girls there.

“At first, I would avoid the guys who are there and try not to get in anyone’s way,” said Hart. “Recently, I’ve been trying to assert myself and my position at the skatepark. I know I have a place there just as much as anyone else.”

Skateparks entertain a competitive environment, one that can show hostility toward less experienced skaters. However, Hart learned to handle the heat.

“Ever since I’ve been showing up, I’ve had a few guys question me or tell me to get out of the way. They say things like, ‘Shouldn’t she be at a roller rink?’ The skatepark has encouraged me to stand up for myself,” Hart said. “If anyone were to be rude or discouraging, I know I am confident enough in myself and my abilities to not let it affect me.”

Lauren Argue, junior sociology major, also roller skates at the OB skatepark and shares similar experiences as Hart. Argue loves to street skate, but wanted to challenge herself at the park. When she started going regularly, she took note of people’s reactions to her.

“I do get a lot of looks from people, especially the guys. A lot of people are shocked to hear I go by myself or at all. I don’t think they’d be as shocked if I was a dude though,” said Argue. “The park is so heavily dominated by men that girls are afraid of looking stupid in their eyes.”

Argue believes that despite skill level, anyone should feel welcome at the park. She said, “I think men expect greatness and high skill when a girl comes to the skate park because it’s so rare…which I think is dumb. Why can’t I go and just have fun?”

Like Hart, Argue shrugs off the opinions and focuses on skating. She said, “I have been undermined before and it’s not my favorite feeling but I choose to not take it personally.”

Now, Argue said she turns up to the park feeling powerful.

“I think we as women have to be comfortable in our own skin. We can’t let fear run our lives,” said Argue.

Mallory Wakefield does not let anyone stand in her way of skating. Wakefield, a PLNU alum, has been going to Robb Field Skate Park for about a year, but in the past few months, she’s been more dedicated. Wakefield doesn’t mind being one of few girls and doesn’t let anyone distract her from getting better.

“Everybody’s out there doing their own thing just trying to improve, so I don’t mind the occasional weird look,” said Wakefield. “It is awesome when we do see girls though, and I usually try to talk to them.”

Although the skatepark can be intimidating sometimes, skatepark regulars are happy to see new people there.

“I think everyone should be welcome to the skatepark, boy or girl, so I’d say I’m indifferent,” said Imani Espino, a junior multimedia journalism major. “I love to skate, so I get stoked when anyone else shares the same passion.”

Chandler Sieverts, senior marketing major, also skates at Robb Field Skate Park. Sieverts said, “In my opinion, anyone who looks down upon girls or treats girls with disrespect at the park is a kook. The skate park is for everyone and I’m stoked when I see girls shredding or learning at the park.”

Regardless, Hart, Argue and Wakefield are set on changing the atmosphere at the skatepark. To try and eliminate fear, Hart and Argue make themselves available to any girl who wants to have someone to skate with.

“I think it would’ve made a world of difference if I had a girl go with me when I first started,” said Hart.

Hart has begun posting on her Instagram story and reaching out to girls she knows in the local Point Loma area to create a group chat to coordinate group skates. Argue and Wakefiled also try to make connections with other skatepark hopefuls via social media. They want to “full send” with a supportive community of skater girls.