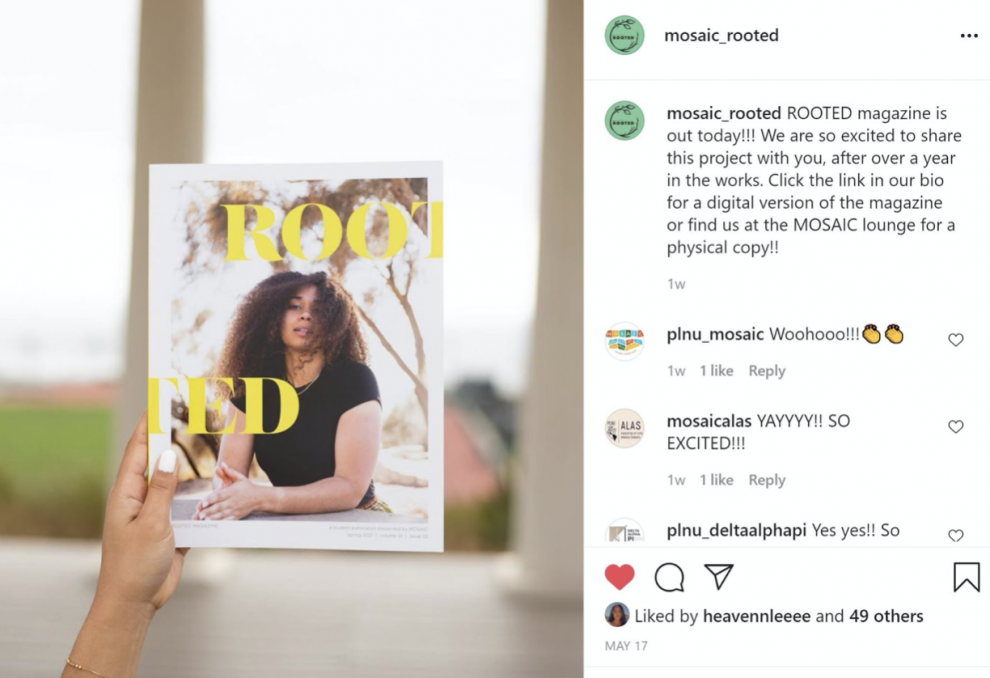 PLNU’s student-run magazine, Rooted, presented by PLNU Multicultural Opportunities for Students Actively Involved in Community (MOSAIC), released its second issue on May 17 and received funding from the PLNU Associated Student Body (ASB) Board of Directors for publication.

Rooted published its first issue in fall 2019 under the leadership of editor-in-chief and PLNU senior Jannah Maling. Maling, a marketing and graphic design double major, was inspired to create Rooted when she came across Biola University’s student publication The Point, which she said was “filled with students’ stories about self-expression and identity.”

“At that moment, I thought to myself that this is something MOSAIC totally needs,” Maling said. “I was also motivated to spread the news about MOSAIC [because] so many [people] don’t even know MOSAIC exists or the awesome student leaders who are part of it.”

Maling presented the idea for the magazine to Associate Vice President and Chief Diversity Officer Jeffrey Carr, Office of Multicultural and International Student Services Director Sam Kwapong and the ASB Board of Directors. Once she received approval, Maling began creating Rooted with a team of four other MOSAIC members. They released the 2019 issue in tandem with the opening of the new campus MOSAIC lounge.

“A lot of people were impressed with the first issue because we had great photographs…and stories,” Maling said.

The second issue of Rooted centers on how students and faculty handled the challenges of the past year.

“I got to hear about a lot of people’s different experiences struggling with and growing in the pandemic,” Michaelian said. “From freshmen to seniors, I feel that Rooted really helped me understand PLNU’s student body better, and [it] was a great way to top off this year.”

“I take comfort in knowing that these participants of the spring 2021 issue were willing to be vulnerable and share some of the hardest experiences for them,” said junior business management student Courtney Dyer. “The content throughout this magazine brought realness and transparency to issues about racism, faith [and] self-discovery.”

Maling wanted copies free for all students, so she met with the ASB Director of Student Relations to request funding for both issues. She said the plan is for Rooted to become an established organization under MOSAIC to receive a budget.

In the future, Maling hopes to create a Rooted website and blog. During her final semester as editor-in-chief in fall 2021, she will focus on building the future team to move the publication forward.

“I hope Rooted can continue to grow after I graduate and shed light on MOSAIC,” Maling said.

Print copies of the latest issue of Rooted are available in the PLNU MOSAIC Lounge. To access the digital version or receive updates, please visit the Rooted Instagram @mosaic_rooted.

What to Know About Vaccines on Campus
Groovin’ At The Point: A Good Sign of Things To Come