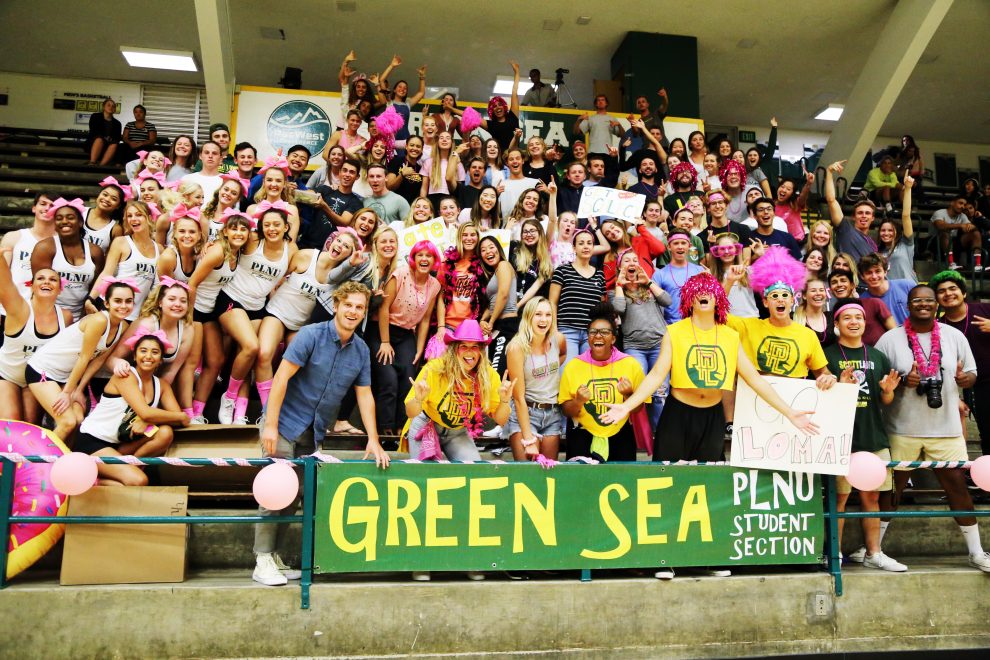 Hand painted neon green cowboy boots are the footwear of choice when interviewing to become a member of the PLNU Green Sea Hooligans. Lila McNeal, sophomore member of the club, jokes that it was her cowboy boots and dance moves that secured her a spot on the team. As someone who admits that she’s a “Hooligan’s nerd,” McNeal was thrilled to hear the news of her acceptance.

Many other PLNU students find themselves in a similar position of anticipation. This year, 412 freshmen students applied to join the Hooligans, doubling the normal level of interest.

The Hooligan fan base is an extension of the Green Sea. These students, typically seen dressed head to toe in PLNU apparel, are hired to lead the student section at sporting events on campus.

In the past, students who signed up for the club during the resource fair would receive an email to come to a game decked out in green and ready to cheer. The loudest and most spirited students would get the chance to interview for a position on the team, and each year, two new students would be hired.

However this year, Kurt Parr, the Associated Student Body director of school spirit and head of the Hooligans, saw the need to implement a new approach to the traditional model. He said after reviewing an overwhelming amount of interest in the Hooligans, we decided to bring in a new concept called ‘the crew.’ This solved the inclusion problem and streamlined the hiring process to not only take in more applicants, but also keep those who don’t get selected involved, Parr explains.

The crew replaces the format of normal tryouts. Anyone is welcome to join, and those who do, receive a jersey with the incentive to come to every game, campus event, and Hooligan meeting over the course of the fall semester. Following all of the events, students have the opportunity to reach out for an interview, and the next two Hooligan members are chosen from that pool.

Senior associate athletic director Brian Thornton, who works closely alongside the Hooligan fanbase, comments on the “complete rebirth” that this year has brought for PLNU’s school spirit. “I went to one of their crew meetings. It’s a fun group. They’re into it, they know what students want and they’re part of the community we’re trying to reach.”

For many of the freshmen and sophomores, this is their first experience at a college sporting event. Parr said that everyone is hungry for something to do and to be a part of that might have been stripped from their high school experience due to COVID-19. Because of the recent pandemic, a restructured model of the Hooligans couldn’t have come at a better time.

Thornton appreciates how closely the athletic department and the Green Sea fan base collaborate, commenting on all of the work that leaders put in behind the scenes to make the new crew format possible; such as Parr and Megan Lewis, Hooligan’s assistant to student life director, and designer Aidan Lechner.

Courtney Dyer, senior libero for the women’s volleyball team, said “the Hooligans make a difference in terms of energy. Being an athlete, it’s always fun to have people in the crowd to represent our school. They are very welcoming to all PLNU students.”

According to Thornton, the combination of the new format and the student’s desire for community after the recent pandemic has created a huge turnout. “This is their first chance, and the Green Sea has done a great job of capturing that and making it fun.”

While the fun, color appropriate boots that McNeal wore to her interview capture the energetic atmosphere of the Green Sea Hooligans, this new crew format has also impacted the larger Loma community.

“I have felt a lot more connected to the school and student athletes,” said McNeal. “I feel really lucky to be a part of this community.”