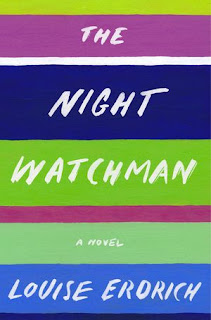 2021 Pulitzer Prize Winner “The Night Watchman” by Lousie Erdrich is an ambitious novel that digs into Native American culture in the 1950s by following the people of the Chippewa tribe as they fight against legislation that would disband their tribe.

Coming in at 450 pages, “The Night Watchman” weaves the relationships between the characters with a dexterity that takes my breath away. Erdrich produces an ensemble cast with remarkable realism; every character is distinct, flawed, unique, alive and bruised with the turbulence of life.

Erdrich takes the time to make sure the reader knows who each character is and what is important about them. One character can’t stand to have strangers bump into her. Another can’t stand to argue with his daughter because she is his mirror image. A third resolutely refuses to answer to her childhood nickname and spends the entire novel demanding to be called by her full name.

These characters don’t exist in a vacuum. Erdrich picks her setting carefully, and most of the events take place in Turtle Mountain, the Indian Reservation in rural North Dakota. Erdrich herself is a member of the Chippewa tribe, and draws on the experiences of her grandfather as he lived during the ’50s and fought legislation that threatened to tear his tribe apart.

With Erdrich’s background and personal experience comes an atmosphere so real and fleshed out I find myself lost in its magic. The reality of poverty is not shied away from; people aren’t warm enough in the winter, food is stretched to last and entire households depend on the income of one adult, usually the adult who could find a decent government job. But Erdrich also doesn’t shy away from the joy. The way the Chippewa people live is inseparable from any part of the book, and it’s always treated as something worth preserving, protecting.

In particular, the spiritualism in “The Night Watchman” caught my attention because of the way Erdrich writes a novel grounded in realism while also dealing with ghosts, the transition from life to death and the traditions of medicine people. There is a ghost’s perspective, characters describe walking along a road to death, and a mother tracks her daughter through dreams. A particularly haunting scene is when a main character watches the spirit of her father climb into his own grave.

I was reminded of Toni Morrison’s “Beloved” (which also won a Pulitzer) because Morrison deals with the supernatural in a realism novel as well. Some might argue that both novels can no longer be considered “realism” based on their definition of reality. One person might not believe in an afterlife, but another will. A writer can mention the Holy Spirit, or intuition, or miracles, and that could go against a reader’s definition of reality.

Perhaps my main critique of “The Night Watchman” is that based on the back of the book, I figured the novel would be centered around this conflict of a senator trying to disband American Indian tribes. However, the delegation of main characters didn’t reach Washington to protest the legislation until page 395. I was disappointed at first, and then realized that I’d gotten there without once being bored.

Erdrich isn’t interested in driving action, varied locations, or snappy events that propel the characters from one event to the next like a springboard in front of a foam pit. Rather, she circles around the community and gently draws out Patrice’s, Thomas’, Wood Mountain’s fears, loves, pasts, hopes, futures, dreams. The ties between everyone run deep, and the action is secondary in the face of what the characters learn about themselves and others.

This is not a book to read in one sitting. Erdrich is a master of detail, and too quick a reading would’ve caused me to skip over the things that made this novel so enriching. A character who only wears checkered clothes, finding the perfect dress in a thrift store. A mother rubbing a baby in bear fat. A daughter making her food last, eating raw dough on her lunch break.

Erdrich’s “The Night Watchman” is a novel of life, and must be sipped, not chugged.

Her Voice Blossoms Among The Wilting: Natalia Lafourcade
Perfect Games for a Cozy Fall Night In