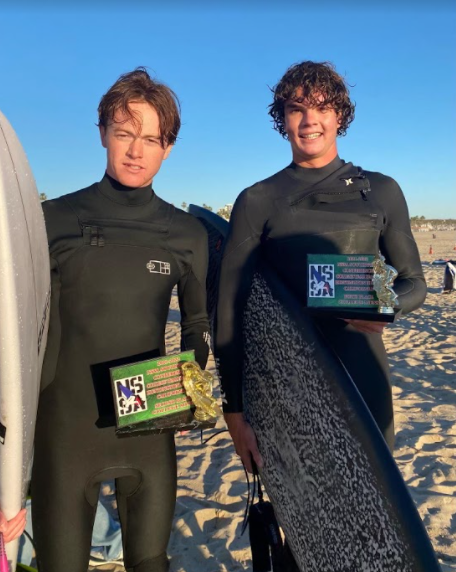 The Point Loma Surf Team returned to campus with a collection of plaques to add to the trophy case. Won at the National Scholastic Surfing Association Event #2 held at Huntington Beach the weekend of Jan. 22, 2022, the competition resulted with Point Loma Nazarene University members placing high in every division; men’s shortboard, longboard, and women’s shortboard.

After being the team to beat during the 2014-2018 seasons, the PLNU team is regaining its rhythm and dominating the competitions this year. The sudden redemption has left the student body questioning: what is the secret to their revived success?

“This year we have gained some awesome talent that we haven’t had in many years… our bond as a team is super solid. Everyone is constantly stoking out and pushing each other to do better in every contest,”  Gunson said.

One of the team’s many talents Gunson spoke of is third-year marketing major, Chase Adelsohn, who won first place for the men’s longboard division at the Huntington Event.

Adelsohn made the most of the less than optimal surf conditions, along with teammates Zoe Bonik placing sixth in women’s shortboard, Jackson Butler and Neil Piper placing second and fifth in the men’s shortboard division.

Third-year Management major Butler explained how the wave conditions kept the surfers on their toes, or at least on their boards.

“The waves were pretty small the whole contest, and the wind was really strong the first day. Who won came down to whoever could get themselves on the best waves of the heat, and maximize the opportunity,” Butler said.

And that they did.

According to Butler, the PLNU surf team keeps a stronghold on grinding through heats and surfing better than anyone else with their natural talent and ability at the competitions.

While the team’s surfing skills prove to be more than adequate, Adelsohn explained how despite the events being scored on individual surfers, the surfers’ support kept teamwork alive.

“It was really thrilling to see the camaraderie of the team and the support for each individual surfer as they went out for their heat. It got me excited to paddle out…the support of the team on the beach was unmatched. It fueled the fire during my heats,” said Adelsohn.

With a win on their backs, the team is now preparing the next NSSA competition at Seaside in Encinitas on March 5-6.

“The team has a really good shot at Seaside because it is a type of wave that our team is very familiar with and can perform on very well. In addition, many people on the team are from Encinitas and have grown up surfing the wave, giving us a home court advantage,” said Gunson.

With Seaside Beach being the closest event to PLNU’s campus among the series, the team is making the most of the 30 minute drive.

“In preparation for the last contest, myself and the majority of the team will be practicing at the event site a few times in the next week. We’ll be working on getting everyone ready to surf their best and go for broke for the season title,” Butler said.