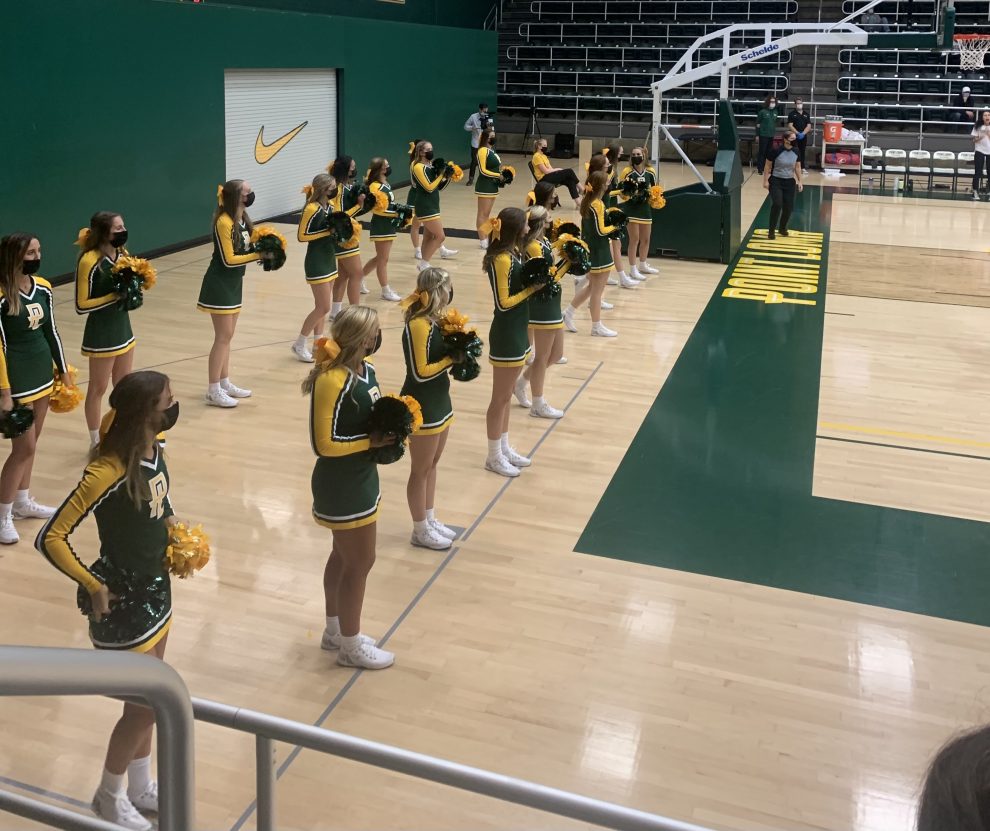 The Point Loma Nazarene University cheer team performed at the Pepperdine University vs PLNU men’s basketball game on Oct. 30. This was their first live audience since February of 2019 due to the COVID-19 pandemic.

While the pandemic halted all in-person practices and performances for the cheer team last year, head cheer coach Ana Buenviaje felt as if this fed into the success of their return to the court.

“Being on a hiatus for a year gave the team more of a reason to come back strong and show the school what they can do,” said Buenviaje. “I was really proud of them. We’ve been working really hard for the past two months to prepare for basketball season and be gameday-ready; I really think they did amazing.”

“We did great, I feel like we brought a lot of energy to the audience and hit all of our stunts,” Morton said. “Our tumblers are such a strength in the team and are able to take our performance to the next level.”

With this being the second-year team members’ first opportunity to perform in a college game, Morton felt there were added nerves leading up to the performance.

“After over a year and a half of not performing because of [COVID-19], I felt like I was proving that I am still capable of achieving the skill set that I previously had. However, soon enough the nerves turned into excitement and I couldn’t wait to get out on the court,” Morton said.

Buenviaje added how the team was able to turn those nerves into excitement.

“I know they were nervous, but they took those nerves and turned it into performance energy,” said Buenviaje.

With many of the COVID-19 restrictions being lifted, the cheer team has returned to a regular practice schedule this school year. To prepare for the basketball season, Buenviaje held a bootcamp over the first weekend of school in which the athletes learned the gameday traditions, chants and sideline dances. Additionally, the team stunts, learns the halftime routines and cleans up their dances Wednesday and Sunday evenings.

Second year cheer team member and nursing major Kylee Kassebaum felt as if this semester’s practice schedule prepared the team for their performance, despite their year-long break.

“Our coach did a great job of walking us through what the game was going to be like and what was expected of us for each timeout and halftime,” said Kassebaum.

With PLNU men’s basketball team being Division 2, competing in an exhibition game against Pepperdine’s Div-1 team brought in a full crowd. Morton was excited to return to the court in front of the packed sidelines.

“The Loma community is something that I was missing, and I was very glad to have everyone together again. The energy from the green sea was through the roof and it made the performance and sidelines thrilling,” Morton said.

Buenviaje hopes to see the energy and large audiences carry into the rest of the basketball and cheer season.