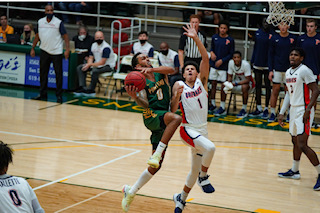 Point Loma Nazarene University came out on top against Division 1 opponent Pepperdine University in a preseason exhibition game on Saturday, Oct. 30th. The Sea Lions finished the game 77-50, this being the first time a D1 school has competed at PLNU in any sport.

Head Coach of the men’s basketball team Matt Logie praised the team for their commitment to always performing at the highest level.

“Whether it’s exhibition or closed-door scrimmages, these are the mechanisms for teams to learn about themselves. The excitement to play such a quality opponent made it a more high-energy game,” Logie said.

The Sea Lions jumped out with a 14 to nothing lead, with returning All-American third year Kaden Anderson who scored the game’s first basket. Fourth year Ben Okhotin followed by hitting a couple of three’s, rendering the Waves scoreless for the first five minutes. Assistant Coach Patrick Frost was pleased with how the game kicked off.

“We got off to a great start offensively. We didn’t come out intimidated,” Frost said.

The sound of excitement boomed through Golden Gymnasium throughout the game. Luke Haupt, second year guard and standout player in the game, had 18 points, 10 rebounds, 5 assists, and 4 steals. He attributes his success in part to the fans that cheered them on.

“The crowd played a huge role in building the energy we needed to win the game. It was really cool that the Green Sea showed up like that,” Haupt said.

With COVID-19 putting a damper on last year’s season,  the players, the coaches, and the fans alike were grateful to be in a space with such high energy and excitement. Logie said it was the first game with fans in 20 months which made for an incredible environment.

Cheers fell quiet after Anderson injured his knee in the first half with 10:43 left to go. Brian Goracke, second year shooting guard and small forward, said that third year guard Brock Mackenzie stepped in to lead the team after the incident.

“We saw him go down and everyone froze in the gym. Brock, one of our awesome team leaders, gathered us all together and we said a prayer for Kaden. After that, everything just clicked,” Goracke said.

After Anderson’s absence, Goracke hit a three, resetting the lead 23-10. Trey Anderson extended the lead to 29-13 with a three from the right corner. Pepperdine scored the next ten points, however PLNU rose to the top, rounding out the score with a 42-28 lead at the half.

“In the eyes of the public, we were the underdog, but we have a very skilled team and we were confident in our abilities. It was an opportunity to show everyone what we can do,” Goracke said.

Logie and Frost agree that the chemistry and communication of the team assisted in the success of the game.

“For this group, we’ve realized how special of a season we can have. They are all bonding and they really enjoy playing with each other,” said Frost.

Logie added, “They are good people, and those are the type of guys you want in your program. We have a group that is very committed to be the best they can be.”

The Sea Lions started the second half with Okhotin hitting a jumper and Myles Franklin nailing a three, bringing the lead to 19. Haupt led all scorers with 18 points, adding 10 rebounds for the double-double. Goracke added 13 and Franklin 12.

With 16 minutes left to go in the game, the Sea Lions were up 25 points. PLNU never fell behind, giving fans the victory they craved and the team the satisfaction of beating a Div. 1 school. The Sea Lions will start the season 0-0, as the exhibition game will not count toward their season standings.

“We took it just as seriously as a regular game. It doesn’t count for our record, but it counts for our own pride and is a measure of what our season can be,” Goracke said.

The next home game for the men’s basketball team is on Nov. 17th against San Bernardino.

“We are excited for the opportunity to play and blessed to have people back in the stands,” said Haupt.