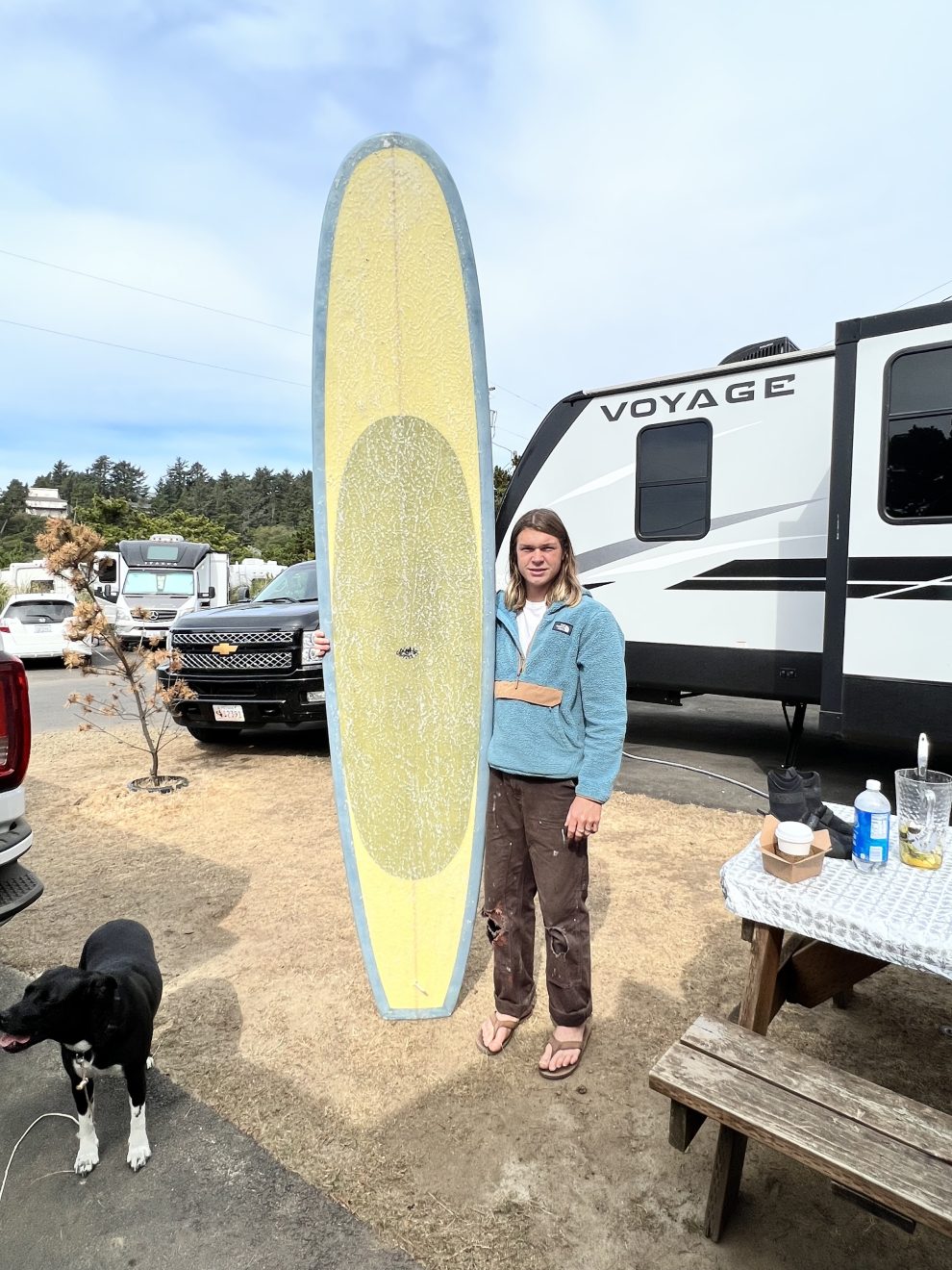 A stoic surfboard-shaper stands, arm crossed, on the fourth floor of Young Hall at Point Loma Nazarene University, staring out of his dorm room window. He quietly dissects each line of movement in the ocean, contemplating paddling out. Jensen French, a second-year business administration student at PLNU, runs a surfboard-shaping business called French Surfboards. Originally based in Lincoln City, a small town on the central coast of Oregon, French Surfboards has expanded to California. Jensen French, who prefers to go by ‘JJ,’  loves creating and surfboard shaping is just one outlet of his artistry.

Shaping a surfboard begins with a foam blank which is cut and sanded down until it is the exact shape that the surfer desires. Some want thicker rails to get into mushier waves, but some prefer thin rails, which might make it easier to duck-dive and manage a slab. More rocker will allow you to drop in on steeper faces but might slow you down. The shaper thinks about these things and many more when shaping a board for a surfer. The final step is to glass the board with fiberglass and resin, resulting in a product that perfectly generates lift and thrust on a wave.

French’s father was a surfer and would take him throughout his childhood, however French never enjoyed it until he became interested in creating his own boards.

A family friend shaped French a 6-foot-9-inch thruster, but he wasn’t satisfied with the low performance of the board. He would try boards, but was continually dissatisfied. When he watched a video of well-known shapers using minimal supplies, he realized that he could do it too.

“I was in the mood for a new board and I didn’t want to buy another one,” French said.

He started sanding his first piece of foam and shaped his first board in the spring of 2020. His first few boards were passion projects until he discovered a market for his skills. He quit his job in high school and started dedicating more time to shaping in the summer of 2021. That summer, he made a total of 10 boards, keeping some for himself and giving others to close friends. French Surfboards was born.

“I was trying to get boards made for surf shops but I wasn’t able to get ahead on orders for boards,” French said.

Moving away for college put a slight roadblock in his desire to be a shaper. French tried to shape a board everytime he went home throughout his first semester. He was able to set up a new shaping bay on his family’s property in Lincoln City. This summer, he was able to shape 10 boards both for local Lincoln City residents and PLNU students. The shaping scene is a lot different in Oregon than it is in California, according to French.

“Shaping is unheard of in Oregon. It’s really only the professionals but you come down to California and everyone has shaped a board before,” French said.

However, he has found a market for his boards at school and has shaped boards for three different people at PLNU. One student is second-year business administration major Braden Tarka.

“I’ve really enjoyed my board from JJ. I got a 6-foot twin fin and got a chance to surf it in Costa Rica last spring break and it was great,” Tarka said.

French is happy to expand his business to California because he does not have a lot of buyers in Oregon. Expanding has been helpful in getting his name out to more surfers that could become loyal customers. However, the demand for quality boards is high in California and the competition is fierce. Many well known shapers are based in Southern California.

“I feel like if a guy is going to buy an expensive board he’s gonna buy it from Tyler Warren or other well known shapers like that,” French said.

Nevertheless, French is striving to create boards with creativity and quality. He finds enjoyment in being able to appreciate the way a board looks and how it surfs. French doesn’t think of himself as an artistic person, but feels like he is creating art through his surfboards.

“With surfboards, you have this beautiful piece of art that’s also insanely fun to play with,” French said.

Few people are given the opportunity to shape surfboards and it’s an art even fewer learn to master. Being able to see a surfboard in a block of foam is a unique ability.

“For me surfing has changed my life. It’s given me a sense of community and changed the way I view the world,” French said.
To learn more about JJ’s surfboard shaping business or inquire about a board email him jensenfrench02@gmail.com or visit his IG @jjfrench02.