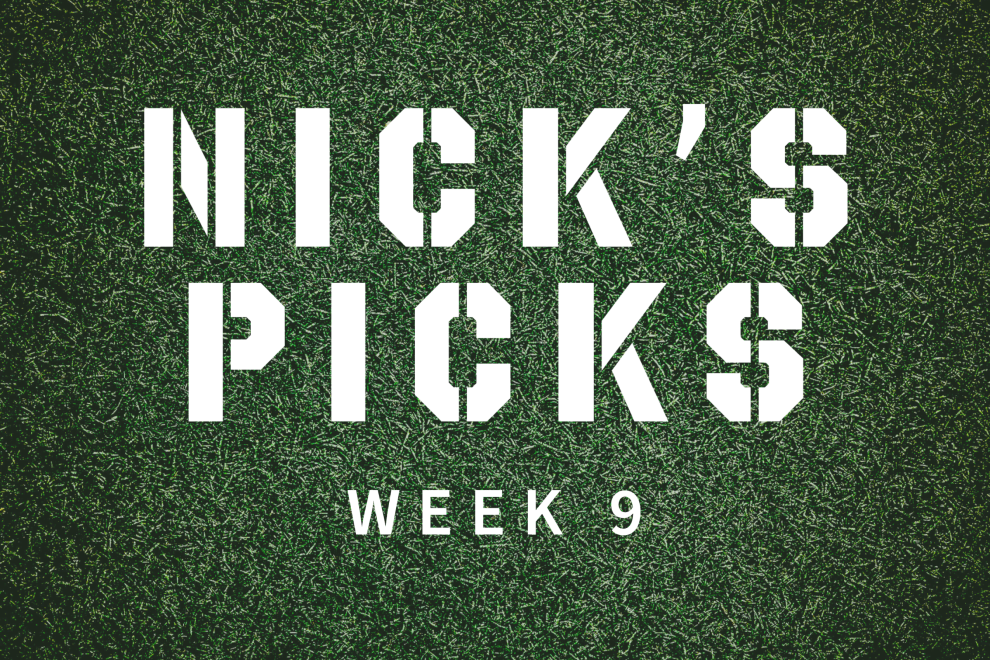 Week 9 of the NFL season is probably going to seem quiet compared to past weeks. With six teams out on a bye in Week 9, there will be less games and plenty of star NFL players unavailable in your fantasy lineup. This week’s bye teams are the Cleveland Browns, Dallas Cowboys, Denver Broncos, New York Giants, Pittsburgh Steelers and San Francisco 49ers. With that being said, fantasy football managers will be without players like star running backs Christian McCaffrey, Saquon Barkley and Nick Chubb. Other managers will also be looking for replacements at quarterback and wide receiver, so let’s get right into the best “sleeper” picks of Week 9.

Despite Bailey Zappe (0 points) playing in the second half of Week 7’s game against Chicago, he wasn’t utilized at all in Week 8 against the Jets. The Patriots hinted at possibly using both of their young quarterbacks, but Mac Jones still has a firm grasp of the starting QB role in New England. After proving the doubters wrong in Week 7, PJ Walker (16.68 points) had an even better game in Week 8. Atlanta’s defense had no answer for Walker, and he was able to collect over 320 yards between the pass and run game. Walker has brought new life to Carolina and has shown he deserves to remain in the starting lineup. If he keeps up this elite level of play, Walker would be a valuable asset in fantasy leagues lacking quarterback depth.

Marcus Mariota (vs. Chargers): For being one of the most productive, consistent quarterbacks of the 2022 season, Mariota receives little attention. A few weeks back, I had him as a “sleeper.” Since he is still available in 76% of fantasy football leagues, Mariota is eligible to be named a “sleeper” once again. He has had only one bad start back in Week 4, while proving he can produce plenty of fantasy points in the other weeks. This could be one of the last weeks that Mariota flies under the radar before fantasy managers wake up and realize how well he’s playing.

Justin Fields (vs. Dolphins): It feels as if I was just explaining why Fields is slowly becoming the perfect fantasy football quarterback. Just a few weeks ago, Fields was a “sleeper” because his production was increasing by the week. Good news for those who did pick up Fields: he has only gotten better these past few weeks. Week 8 saw Fields put up 26.04 points—his season high. The Bears keep losing, but Fields keeps getting better. As long as Fields continues to improve and score fantasy points, his team’s losing record is irrelevant.

With Baltimore’s lead running back, J.K. Dobbins, on the injured reserve for the time being, it was expected that the next guy in line would see as much playing time as Dobbins. Gus Edwards (6.5 points) was supposed to be that guy, but unfortunately Edwards had to share touches with two other teammates. The trio of running backs replacing Dobbins won’t have much fantasy value if they continue to split playing time. The other “sleeper” running back in Week 8 was D’Onta Foreman (31.8 points) who took full advantage of having no competition in the backfield. The only other teammate threatening Foreman’s playing time was ruled out before the Panthers’ game, and this meant it was Foreman receiving all the touches. He ran for over 100 yards and found the end zone three times. Foreman needs to be in your lineup, as this is the second game that Foreman has carried the Panthers’ offense.

Nyheim Hines (vs. Patriots): Hines was a “sleeper” earlier in the season after teammate Jonathan Taylor was out with injury. Taylor was the top draft pick in the majority of fantasy leagues due to his high usage in the Colts’ offense, but he has been abysmal this season. The down year Taylor is experiencing has given Hines the opportunity to get on the field more often. He just had his season high in touches and managed to score in Week 8. Hines is still available in 55% of fantasy leagues, and if Taylor’s ankle continues to limit his usage, Hines could start scoring more fantasy points.

Tyler Allgeier (vs. Chargers): The recent success Allgeier is having at running back likely makes this the last week he’ll be considered a “sleeper.” I had picked him as one a few weeks back when the other running back in Atlanta got hurt, but his first week as the main back was disappointing. He’s embraced his expanded role these past two weeks, and posted back to back solid performances. He’s available in just under half of fantasy leagues, and if you don’t snag him now, you won’t have another chance later down the line.

Last week was unique since I decided to only pick one wide receiver for my “sleeper” pick and throw in a tight end that I was confident would have a good game. The lone receiver I selected was Kalif Raymond (10.6 points), who posted another impressive performance. Considering he only caught three passes, the 10.6 points he had is commendable. Raymond is becoming a reliable option for fantasy managers in need of a player for their flex position; however, once the other receivers in Detroit come back from injury, Raymond’s production will take a hit. Austin Hooper (1.5 points) was the tight end I mentioned for managers looking to replace star tight end Travis Kelce during his bye week. Sunday was a bad day to be a pass catcher on the Titans. Tennessee turned to rookie quarterback Malik Willis, and he couldn’t get anything going through the passing game. The Titans ended up relying on their running backs to dominate the Texans offense and this led to Tennessee only completing six passes all game. Hooper should see more production in the future though, so don’t be discouraged if you picked him up last week.

Romeo Doubs (vs. Lions): In Week 7, Doubs failed to reel in a pass after having back to back poor performances in the two weeks leading up to that game. Things were looking ugly for Doubs, and many feared his quarterback would lose all trust in him. Doubs used a primetime game on Sunday Night Football to show football fans what he’s still capable of, and put up 16.2 points. This rebound after a stretch of weak outings is encouraging, and I would grab Doubs for your bench in hopes he continues to build off of his Week 8 game.

Parris Campbell (vs. Patriots): Another beneficiary of injuries to several teammates, Campbell went from an unknown player to one of the main targets in the Colts’ offense. The past three weeks have been an eventful bunch for Campbell, who seems to be improving by the week. Campbell even got active in the rushing game in Week 8, rushing for 28 yards to complement his 43 yards in the air. A tough Patriots defense could threaten Campbell’s hot streak, but regardless, he could be valuable in the long run.

The increased number of teams on a bye this week makes Week 9 an interesting one. We went from two teams on a bye to six, so expect your roster to feel emptier than usual. The waivers look solid this week though, and injuries always open the door for other players to get involved. Use these things to your advantage, and find the players with the most potential to have a breakout game. Fantasy football can feel like a never-ending battle, but staying on top of the waivers makes it an easier battle to win.