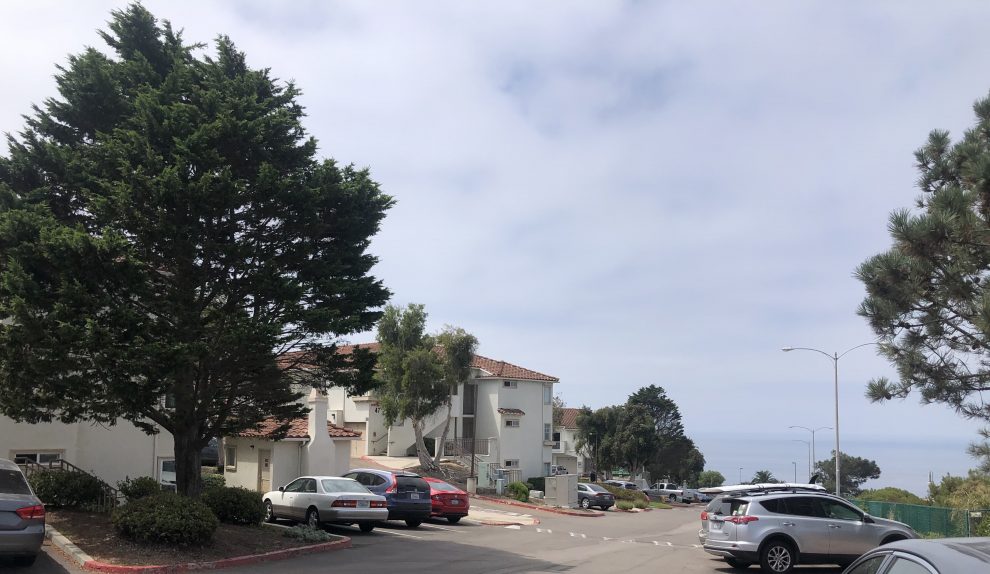 Eerily quiet, an empty caf lane and instead of students, middle-aged adults meander through campus with their dogs. This is how Kayla Voegele, sophomore nursing major, described the PLNU campus vibe on a Saturday afternoon. This is the new normal for the 261 students living on campus.

Many students welcome the change of scenery and getting some sense of campus life this semester, despite the permanent Saturday vibe. Senior environmental science major Alicia Sillers said she is enjoying only having one roommate in her Flex apartment, as opposed to last year when she shared the same space with four other students. Ryan Foreman, sophomore political science major, has a whole room to himself in Wiley.

“It’s honestly really great,” said Sophie Olmstead, senior applied health science major living in Flex apartments. “I’ve never had my own bathroom or anything like that, so being able to have your own space, especially with Zoom, is really nice.”

So, what’s so bad about Saturdays? Many students agree that while an empty campus seems fun at first, they wish there were more people. With the absence of students and strict housing regulations—which include only having one other student in the room and no off-campus visitors in the dorms—some experience a longing for more human interaction.

“I miss the community aspect… people to interact with, hang out, to talk to,” Foreman said. “I’m sick of passing the same people [on the way] to the caf and being like, ‘Hey, what’s up? How’s your day?”

Luckily for Foreman and those who wish to move back onto campus, Assistant Housing Director Molly Unverzagt has good news.

“With the state and county guideline we are able to house a few more students on campus,” Unverzagt wrote in an email. “We will be prioritizing single occupancy in the res halls and in some cases will have double occupancy. We will end up being around 50 [percent] capacity across campus.”

Hopes are high that this will end the Saturday monotony, but even with these regulations in place, students are skeptical it will do much to prevent an outbreak on campus.

“If they’re going to put 50 percent of students on campus and still do all online, there’s more likelihood that someone gets sick in the dorms because college students aren’t going to follow all the guidelines,” Olmstead said.

Foreman said when he first moved back onto campus he didn’t see anyone wearing their masks. He agreed with Olmstead that many students won’t do the tedious tasks like taking their temperature every morning.

“It’s not the first thing on my mind when I wake up,” Foreman said.

To ensure students are healthy and not unknowingly exposing others, the Wellness Center introduced the Campus Clear app, which is encouraged to become a part of students’ daily routines. When asked about the app, students had mixed responses. According to Olmstead, there are all different kinds of buttons you can press to describe any symptoms, and she uses the app almost every day.

In contrast, Foreman admits he’s never heard of the Campus Clear app before this interview. He said he received no emails regarding this app, but insisted he was fine and had not experienced repercussions for not using it.

One thing Sillers, Olmstead and Foreman were all confused about was whether there are consequences for having a temperature or not even using the app in general.

“If you have a temperature, you just need to call the Wellness Center and someone will help you figure out the next step. No one is going to come after you, you won’t be punished,” Bogan said.

The purpose of the app, according to Bogan, is to encourage students to commit to health and safety. “The Campus Clear app is also accessible to students living off campus and is there for their benefit,” Bogan said.

After experiencing the frustration of keeping up with the ever-changing information and updates, Olmstead concluded PLNU is doing the best they can considering the circumstances and guidelines they have to follow. With PLNU doing their part, students are also responsible to do what they can to stay safe: wear a mask, take your temperature and wash your hands. If everyone does their part, someday the cycle of infinite Saturdays might come to an end.

Should I Stay or Should I Go?
College Democrats and Republicans Gear Up for 2020 Election