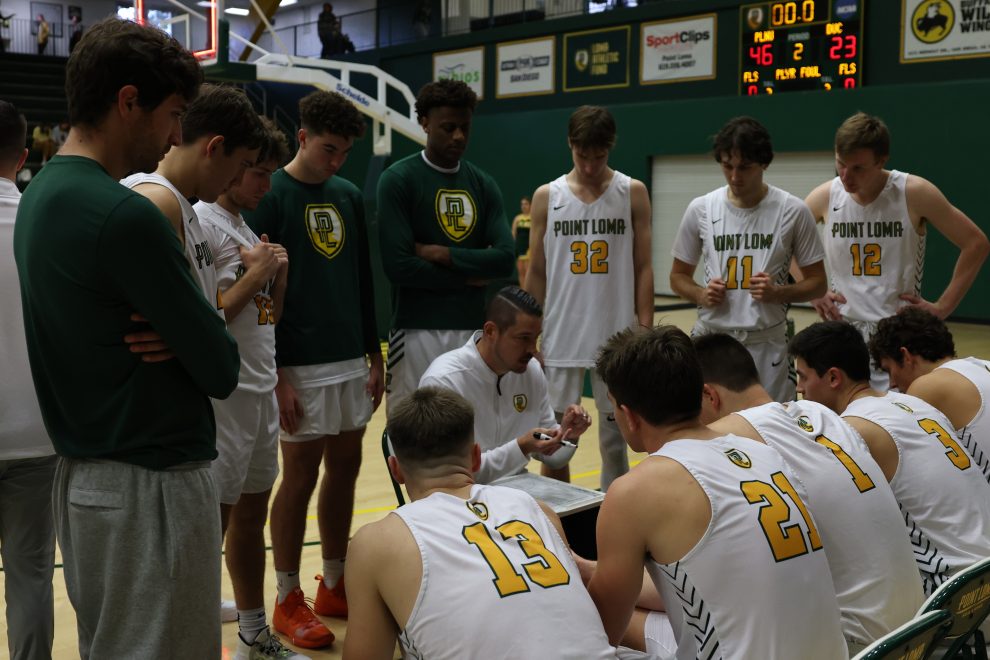 Over the past weekend, men’s basketball took down Dominican and Academy of Art, reaching a 14-0 record. Starting players like Kaden Anderson, Luke Haupt and Shamrock Campbell made significant plays and points. Campbell’s execution at the line, making two free throws in the last two minutes of the Dominican game put the Sea Lions ahead just enough to clinch the win.  Anderson is having a stellar senior season leading the team with 452 points made and an average  of 20 points (minimum) per game.

The Sea Lions also defeated the school’s rival (Azusa Pacific University) last Wednesday in a nail-biter game that brought students and faculty to the stands.

The Point sat down with head coach, Matt Logie, to hear about his goals and game plan for the rest of the 2022-23 basketball season.

The Point: How do you build the sense of team rapport that has driven the team this year?

Matt Logie: This has been a really special group of guys to coach. We were very fortunate to return some core guys from last year’s team that know the culture of the program and how we like to play together and things like that, in particular Kaden Anderson, Luke Haupt and Brian Goracke. In building this year’s roster, we also added some transfers who all had fairly deep ties to either myself, someone on our staff or someone on the team. Last spring, we graduated four really talented players.

We had a lot to replace, and the way that the roster came together in the spring was a really cool confluence of relationships, faith and alignment of what we all wanted to accomplish together. For example, Shamrock Campbell, our starting point guard, attended my very first basketball camp in Spokane at Whitworth University when I was coaching there when he was 11 years old.  I got to see him grow up in high school. I recruited him at Whitworth and ultimately didn’t have the chance to coach him there, but, as God would have it, our paths synced up last spring so that’s been a lot of time with him at shooting camps, clinics and things like that during my time at Whitworth. That was a really special connection to me to see somebody that I’ve seen put so much work in and be prepared for that opportunity we have together.

Tobin Karlberg is another basketball camp connection with our coaching staff. Coach Downer, Coach Smith and myself all met through a private basketball camp organization and Tobin was someone who went to a lot of those camps.

We just continued to look for guys who knew what we were about. A lot of deep full circle type of things that transpired all at once and once we got everybody together this fall everything just clicked rather quickly.

TP: What has been a highlight moment for you?

ML: I think we’re still working toward it. Our goal is to be the best version of ourselves at the end of the year, and we’ve accomplished some really good things at the start. Our schedule at the beginning of the year was really challenging and tested us. [It] forced us to grow and come together. Obviously, the two wins versus preseason favorite, Azusa Pacific, have been a highlight thus far but this group has high expectations and strong aspirations. I don’t think we’ve had that moment yet.

TP: In last week’s game against APU, it came down to the last minute with a very close score. In the final moments of last night’s game [against Dominican], Campbell made pivotal two points. What do you train in practice to help the players push through the pressure?

ML: I think one of the core values of our program is trust. I think we try to prepare them in practice and through our preparation to know what to expect in games and build that trust and camaraderie with one another, that they can count on one another in those pressurized moments. I think we’ve seen that from this group throughout the season. They’ve been very composed and have stayed together. We’ve been able to win some tight games because of that.

TP: Seeing that 12-0 record maintained after the Dominican game last night for me, as a student, brought out a lot of school spirit. With the big turnout at the APU game, students rallying around our team, what is it like as a coach or maybe for the players to feed off that energy?

ML: As a coach, it’s a beautiful thing because of all the work that goes on behind the scenes to build those opportunities, not only building a roster but also building a roster that connects with the student body and wants to represent their peers in the way these guys do. I [sent a] thank you to our students after the [APU] game and I really meant it. We take great pride in being able to represent Point Loma, and we want to share in that experience. We want whatever we accomplish this year to be a shared experience with our students and community. I think hopefully people were able to feel that last week, and we can continue to get crowd support in the final home games in January and February.

TP: What are some things you want to work on with the team going into the playoffs?

ML: We’re really focused on staying true to our identity and playing up to our standard. Defensively, we’ve been really really strong all year long. That’s been one of the main keys to our success, in addition to the unselfish nature of this group — how much they love one another, want to see each other succeed and don’t really care who gets the credit on any given night. I think those are the two things that we want to strive for and build. When those two things are happening at a high level, we can compete with anybody in the country.

TP: I read that last year, the Sea Lions were selected as the fourth seed in the 2022 NCAA West Regional, which is the fifth consecutive year qualifying for the NCAA Tournament and the longest current streak of any Division II program in the West Region. How do you intend to keep the streak going into the second half of the season?

ML: I think we’ve positioned ourselves really strongly within the region thus far. Ultimately, to make the NCAA tournament on a consistent basis like that, you have to have a consistent identity as a program. You have to have a culture that breeds success and championship habits. I think we’ve been working really hard to build that in my first four years here. You focus on those things, work as hard as you can through the day-to-day grind of the season, and then you hope things will break your way. We’re very well positioned right now to be a high seed in the West Region tournament, so we’re excited about that. Really trying to focus [on] one day, one game at a time.

TP: How has Loma’s success the past few seasons helped/contributed to recruitment both in players out of high school and transfers?

ML: The tradition that Point Loma men’s basketball is beginning to establish is one that people recognize now on the West Coast as one of the most successful small-college basketball programs. Obviously, we had the opportunity to play Pepperdine in the exhibition game and won in grand fashion which opened up a lot of people’s eyes to the level of our team and players who we recruit and who we strive to develop as well. It’s exciting because more and more Division I players are understanding that they can have, sometimes, a much better experience playing at a place like Point Loma with the people who are here; the development that will take place and the opportunity to be successful is oftentimes more than they’re seeing some of their peers go through in other situations. It’s great to have the opportunity to open doors and recruit players who might not have been as open to a place like Point Loma even five or 10 years ago.

With the transfer portal, I think a lot of people that have gone to the Division I level and have had less-than experiences; if they have the opportunity to go to grad school or finish their career — two or three years — at a place like ours, it becomes a pretty exciting opportunity.

TP: Last season you played Pepperdine, a DI team and won. Do you intend to pursue opportunities to play DI teams in the future? If so, what teams?

ML: We pursue it every year. We hear a lot of “no thank you’s,” especially after that [Pepperdine]. It’s one of those things where we appreciate the opportunity to compete at the highest level no matter what division that is. That’s why we schedule like we do in the non-conference part of the season to prepare us for the NCAA tournament caliber teams. And obviously getting the chance to play or scrimmage teams like Pepperdine, or UCSD, SDSU and USD in the pre-season are things we’re always exploring and trying to make happen.

TP: You have some great seniors who are about to graduate. What are your thoughts with the opportunities coming to your bench?

ML: We’ve got some young guys who have had a great first look at what the process entails in terms of being highly successful both individually and as a team. Ultimately, it is a process and so the experience that some of our young guys are gaining, we hope is an investment that will pay off in the future when more opportunities arise. But those are earned as well. I think for some of the guys in our program who are younger or playing behind really talented older players, it’s a great opportunity for them to sharpen their sword, get better everyday and learn. Ultimately, one of our mottos is, “Tradition never graduates.” If we can keep our process consistent and our expectations high, when those opportunities come for the next wave of young men, they’re ready to step up to the challenge and be successful in their own way.

TP: Is there anything else you’d like to share or add as you look forward to the rest of the season?

ML: The biggest thing is our schedule down the stretch here. We have five more home games in the regular season and our team is well positioned in competing for an opportunity to host the NCAA West Regional. That’s a possibility at this point. We really want to encourage our students to continue to join us in that. Be a part of it. Let’s create some memories in Golden Gym together.

To see the full schedule of basketball games, visit plnusealions.com/sports/mens-basketball/schedule?path=mbball