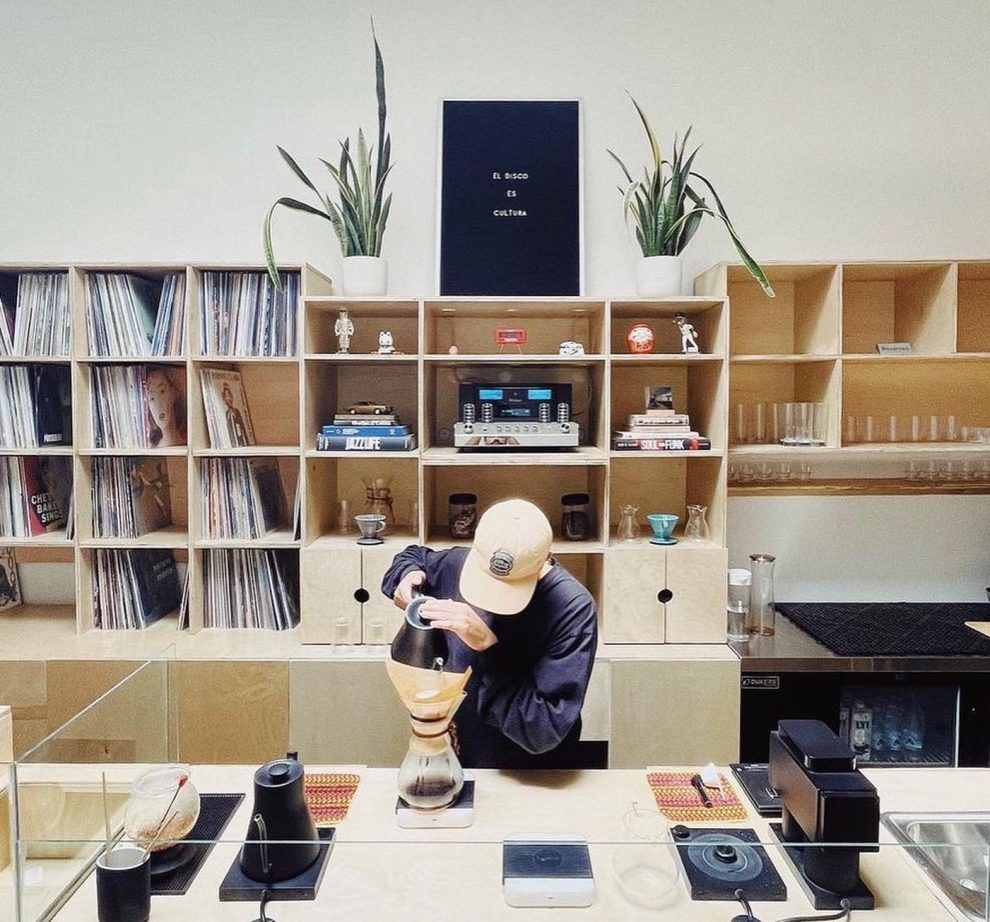 EL DISCO ES CULTURA. It’s written on the walls, it’s written on the records and it lingers in the air amid the aromas of ground coffee beans and the humming of analog audio hardware. It is the essence behind Gibran Huerta’s (who goes by “G”) motivation to open Longplay Hi-Fi, a vinyl-spinning hospitality bar in Barrio Logan.

“Longplay is our show, we’re here to entertain you with music and hospitality.”

Roosting across the street from an exotic bird store, the blacked-out windows and the locked door of G’s bar conceals the warmth, welcome and hospitality awaiting music and coffee enthusiasts.

The bar is the center point of the room, stretching from wall-to-wall within the 20-yard space. Placed at eye-level, it acts as a stage for patrons to view the craft-like process G employs when making pour-over coffees, and the smooth work of the DJ, spinning jazz for hours without end. The space resonates with warmth and zen, the white walls and wood-grain surfaces exude calm and serenity.

G designed the interior with his friend Miguel, whom he met at architecture school in Tijuana. G said, “The bar is an homage to elements of Japanese and Chicano culture intertwined with some hacks that we’ve had to put up with.”

G stated the genesis for his concept stems from his first trip to Japan, “Everything came together for me when I went to Japan for the first time in 2015. I experienced the intersection of hospitality and DJ culture in the listening bar scene and that really blew my mind”

Much of G’s aesthetic influence is derived from Japanese listening bars, but his definition of “hospitality” is drawn from his own cultural roots.

“In Mexican culture (and in Spain as well, and Latin America), we have a thing called ‘sobre mesa,’” said G. “It’s something that’s very special and oftentimes doesn’t get experienced here in the States. Sobre mesa is basically, [the staff] will never bring you the check, never ever. The conversations that take place at the table, after you’re done with your food, it’s sacred. We don’t want to touch that.”

G initially struggled to realize his dream for Longplay because, like everyone else, the COVID-19 pandemic got in the way. Longplay Hi-Fi began in January of 2019 as a series of pop-up events in coordination with other hospitality businesses. G would DJ at a temporary sound booth and sell handmade Tijuana-style breakfast burritos.

That lack of permanence inspired G to find permanent space, but the timing was not in his favor. “The goal was to have one pop-up a month for 18 months and then in those 18 months develop our social, see if things were working and then start looking for a brick and mortar space. And you can say that I kind of did that, but I just did it in a really different way because by March Covid had already taken over,” said G.

In July of 2020, G discovered the location where he wanted to set up shop. Customers could come pick up their burritos and coffee to go, and DJ’s would spin music while they waited. “We were doing these pop-ups where we were introducing, very slowly, a version of what we were going to do eventually when we got everything together, which was really our plan since day one,” said G.

G says Longplay Hi-Fi would not be possible without the passionate team he has recruited throughout Longplay’s development. “Shout out to the landlord!” G said. “They really understood my vision and when I met Jeanette and Eduardo, my landlords, they understood the neighborhood really well and it was cool to see that they had already been established there and were really committed to the neighborhood. I like that. When I met them and I explained my concept, I remember Jeanette saying, ‘I don’t really understand what it is, but I like it and want to give you a chance.’”

The rest of G’s team embodies the inclusiveness and variety of culture that G admires. Jack from New Jersey, and a former patron, regularly works the DJ booth in the absence of guest DJs. Andrew (otherwise known as Coco) is a first generation Chicano who designs and creates drinks with G, Paola is a hostess that G met through his friend Miguel, and Miguel assists with design and infrastructure after having learned architecture at Escuela Libre de Arquitectura with G.

Ryan Valenzuela, a San Diego resident, is a frequent guest at Longplay. “What makes Longplay so special is the community aspect of the venue and the cafe. Every time I’ve gone in, I’ve seen returning customers and talked to them, learned their names; the owner is incredibly personable to anyone who walks in the door, and will remember your name. He treats you like you’re the only person in that room. Aside from the great music, I find that really special, because I’ve never experienced that anywhere else yet,” Valenzuela said. “Also they have food.”

Multiculturalism is an important part of Longplay’s identity, according to G. “My previous job I was going to Colombia and Brazil a lot, seeing their coffee cultures and finding their connection to Mexican coffee culture. Latinos drink coffee all day and they focus on drinkability. I saw that a lot in Japan as well so it’s influenced how I brew coffee, how I serve coffee: we focus on high drinkability.”

If the coffee is easily drinkable, the music is just as easily digestible. While occasionally jumping into the fray of hip-hop and experimental, Longplay Hi Fi primarily plays jazz music. “Jazz, for me, is a big part of my life, but we tell DJs we want [them] to play warm music. Something that represents who the selector is and hopefully something that can create dialogue for the people that are there,” G said.

“We do want the music to potentially create some kind of dialogue, so hopefully you can leave Longplay with maybe a new artist you shazamed or maybe it was unshazamable and we have to tell you the artist. Even though my personal styles are fixed, we embrace everything out there and our library reflects that.”

Longplay HiFi is open Friday through Sunday from 10 a.m. to 3p.m., serving coffee and tea from a limited menu, and G plans to expand their services with evening hours that transform the coffee bar into a Mezcal bar ‘GASPAR.’ “We want it to be a mezcal bar, inspired by low-lit Oaxacan mezcal bars, tiny, we want to tap into the world of agave. It’s not in the pipeline right now, but the ideas are there.”