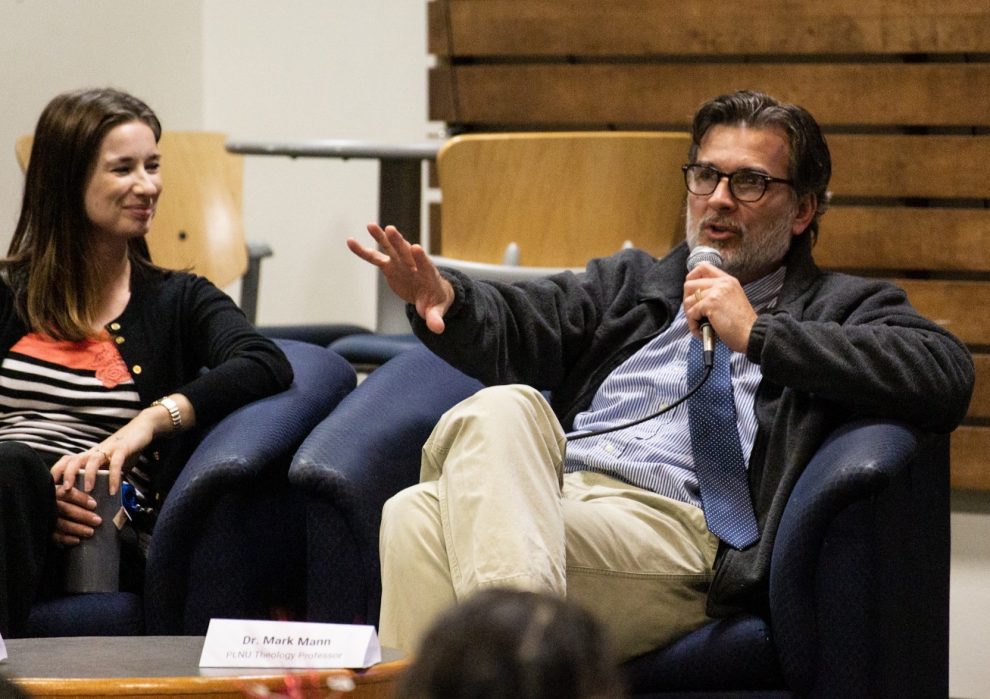 If there is one topic Christians try to avoid in conversation, it’s sex. But last Wednesday, more than 30 PLNU students and faculty gathered in the ARC to talk about just that.

The sexual health seminar and panel was a development of an honors research project and featured assistant professor of sociology and social work Jimiliz Valiente-Neighbours, professor of theology Mark Mann and Tara M. Beeston, who is the STD Prevention Program Manager for San Diego County.

The two PLNU students who organized the event—senior nursing majors Samantha Fezzey and Sydney Henderson—have been conducting a research project on sexual health and comprehensive sex education in hopes of changing how sex is talked about on Christian college campuses.

Fezzey and Henderson conducted a survey in the Fall of 2019 to evaluate sexual activity and education among students at PLNU and found that, according to the 500 students who responded, 54.7% had engaged in sexual activity. Additionally, according to the Centers for Disease Control, more than half of all new STI cases come from individuals between the ages of 15 and 24. These statistics as well as the feedback Fezzey and Henderson received from students ultimately informed the seminar and panel.

Wednesday night, the aroma of Krispy Kreme doughnuts hovered over round tables decorated for the week of Valentine’s Day. The crowd gathered in the ARC reflected the Loma ratio, as the majority of attendees were women. Olivia Williams, a sophomore psychology major, and Lauren Crook, a sophomore business major, showed up because they heard about the seminar via email.

Crook said she thought sexual health “should be a less awkward thing to talk about,” which is why she decided to attend the event. Williams agreed, and said she was “curious to see how [they were] going to facilitate more discussion around it and more education about it.”

The evening began with a 30-minute presentation about the STI epidemic by Tara M. Beeston. Her lecture was followed by a moderated panel and anonymous Q&A session, which gave Beeston as well as PLNU faculty members Valiente-Neighbours and Mann an opportunity to comment on the topic of sexual health as experts in their respective fields.

As of 2020, comprehensive sex education—which Fezzey and Henderson described as including topics like contraception, consent, body image, sexual identity, abstinence and healthy realtionships—is only mandated for public schools, and curriculum varies from state to state. According to Fezzey, this variation often creates a knowledge gap between students of different backgrounds and especially between adults who are studying at Christian universities.

“A lot of people shy away from talking about sex,” Fezzey said. “We always see a couple people cringe when we talk about it.”

Sexuality “is this secret thing that’s put away into the black shadowy recesses of our lives, and then we are not able to talk about it at all,” Mann said. “Around sex and around silence swirls shame; it binds the two together … and that only leads to deeper and more complicated problems.”

Fezzey and Henderson said comprehensive sex education shouldn’t look different at public colleges versus private ones, although a Christian version of the curriculum could incorporate some religious elements.

“From a medical standpoint, it is the same statistics,” Henderson said. “Regardless if they are religious or not religious, most people are going to be sexually active at some point in their lives, so I think it’s important they are given the same education.”

Some Christians are worried talking about sexual health may encourage students to abandon their religious beliefs about human sexuality, but Fezzey said that was not the goal of their research.

Valiente-Neighbours opened the panel by addressing bodily autonomy, another significant aspect of comprehensive sex education. “I wanted to illuminate that sex education does not always revolve around the act of sex, but what consent is,” she said in an email to The Point.  “It really is all about teaching people to establish boundaries and respecting them.”

Sex education intertwines with Christian faith because “sex is not simply something we do with our physical selves,” Mann said. “Sex also includes our spiritual selves, our emotional selves, our intellectual selves… our whole selves. So sexual health is going to include that as well. You can’t separate spiritual health from any kind of emotional or physical health, in my opinion. These things are interwoven in deep ways.”

In addition to sustianing an open dialogue about sexual health, Fezzey and Henderson said they hope to encourage PLNU to implement comprehensive sex education as a part of Freshman curriculum.

File Your W-2 With Confidence
The San Diego Representative Race