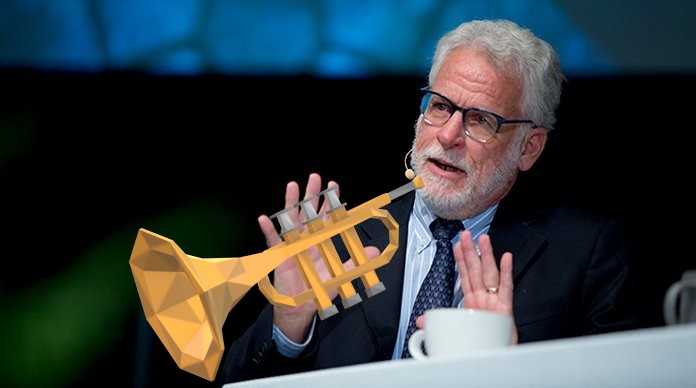 If you’ve ever taken a literature course with Dr. Karl Martin, you know it’s inevitable that he will eventually dive into a tangent about American music and how it connects to whatever it is you are reading. He gets really excited about it, then apologizes for getting off topic and brings the chat back to the book. Books are cool, but in reality, everyone’s favorite part of class was his deep dive into obscure rock n roll, or his description of a documentary about a music festival with 300 attendees that went down in the 60’s.

It was about time I poked the bear, so for finals week I gave Dr. Martin his own assignment: to share five of his favorite albums. Here are just a few of the albums that shaped and formed Dr. Martin’s taste in music and why you should listen to them.

Dr. Martin:  I love it for the hits like “Sir Duke” and “I Wish” as well as for the deep album cuts like “Love’s in Need of Love Today” and “Another Star.” A great achievement in the Tamla/Motown catalog. And, for me, it is an album that captures America at the time of the bicentennial in wonderful ways.

Tony: This is a beast of an album. Only available in a multi-disc box set, or a multi-vinyl set, “Songs in the Key of Life” has some of Stevie Wonder’s most memorable and eclectic tunes. Wonder combines intricate jazz chords with qualities of motown and funk, he performs out-of-this world piano melodies and his exhilarating vocal deliveries are packed with a voice full of passion and soul that inspired generations of funk artists. “Sir Duke,” “Summer Soft,” and “Ebony Eyes” are some of my favorites for their memorable melodies and catchy rhythms; “Joy Inside my Tears” makes me cry without fail every time, and all the songs in between give me the feeling of cruising down “Mario Kart’s” Rainbow Road.

Dr. Martin: It’s hard to choose between the six studio albums John Fogerty and CCR recorded as a quartet before John’s brother Tom left the band. All are worth a listen to anyone who wants to understand American rock and roll music. But I’ll go with “Willie and the Poor Boys” for “Fortunate Son.” For a couple of years, CCR was one of the great bands in the world, creating hit records with thoughtful content. The streams of American music that fed their creativity were diverse and rich. Most of those streams are on display in this album.

Tony: What would life be like without the rock n roll of 1969? What would Vietnam War movie soundtracks be without “Fortunate Son?” Aside from just having one of the most iconic songs in American Music History, “Willie and the Poor Boys” is a staple of blues-based rock n roll at its prime. This album also packs a lot of range despite its clear cut genre; there’s joviality in “Down on the Corner,” anger in “Fortunate Son,” and haunting melancholy in “Effigy.”

Dr. Martin: Gram Parsons pioneered what he called “Cosmic American Music,” or what might be called alt-country or Americana these days. When he teamed up with Roger McGuinn and Chris Hillman for this album, together they changed both rock and country music forever. To understand The Eagles and a whole lot of later country music, I’d suggest starting with this album. It’s a wonderful blend of older music like “I Am a Pilgrim” and “The Christian Life” and Gram Parson’s originals like “Hickory Wind.” A couple of Dylan covers are thrown in for good measure.

Dr. Martin: Alongside friends like James Taylor and Stephen Stills (both of whom appear on this album), and inspired by the pioneering work of Bob Dylan, Joni Mitchell helped bring thoughtful autobiographical content into rock music. Writing about one’s own personal experiences became acceptable in popular music. “California,” “A Case of You,” “River;” these are brilliant songs. Mitchell also extended the musical vocabulary of rock music by moving in the direction of jazz, using chords few other pop musicians before or since have used. I’m not sure I’ve ever met anyone who has listened to the album and not fallen in love with it.

Tony: This is an album I have been waiting to write about in “Out of the Glovebox.” I had listened to “Ladies of the Canyon” before and a few of the singles by Mitchell that everyone knows like, “Big Yellow Taxi” but “Blue” is something else. My friend, who predominantly listens to hip hop, pulled this out of their glovebox and played it for me when I was 18 and I discovered a whole new level of melancholia. Mitchell strips down her emotions into a raw and detailed collection of songs that mixes tenderness with sorrow into one of my favorite albums, and definitely my favorite Joni Mitchell project.

Dr. Martin: Without question this is the one that is most obscure on the list, the one fewer people will know about. But it is a great, great album. Welch’s lyrics, Rawlings’ stunning guitar work, T-Bone Burnett’s influence—together the mix creates some amazing songs. This one will take some patience, but it will be worth it. “I Want to Sing That Rock and Roll,” “Elvis Presley Blues” and the mythic, hypnotic, nearly fifteen minute long “I Dream a Highway” are highlights for me.