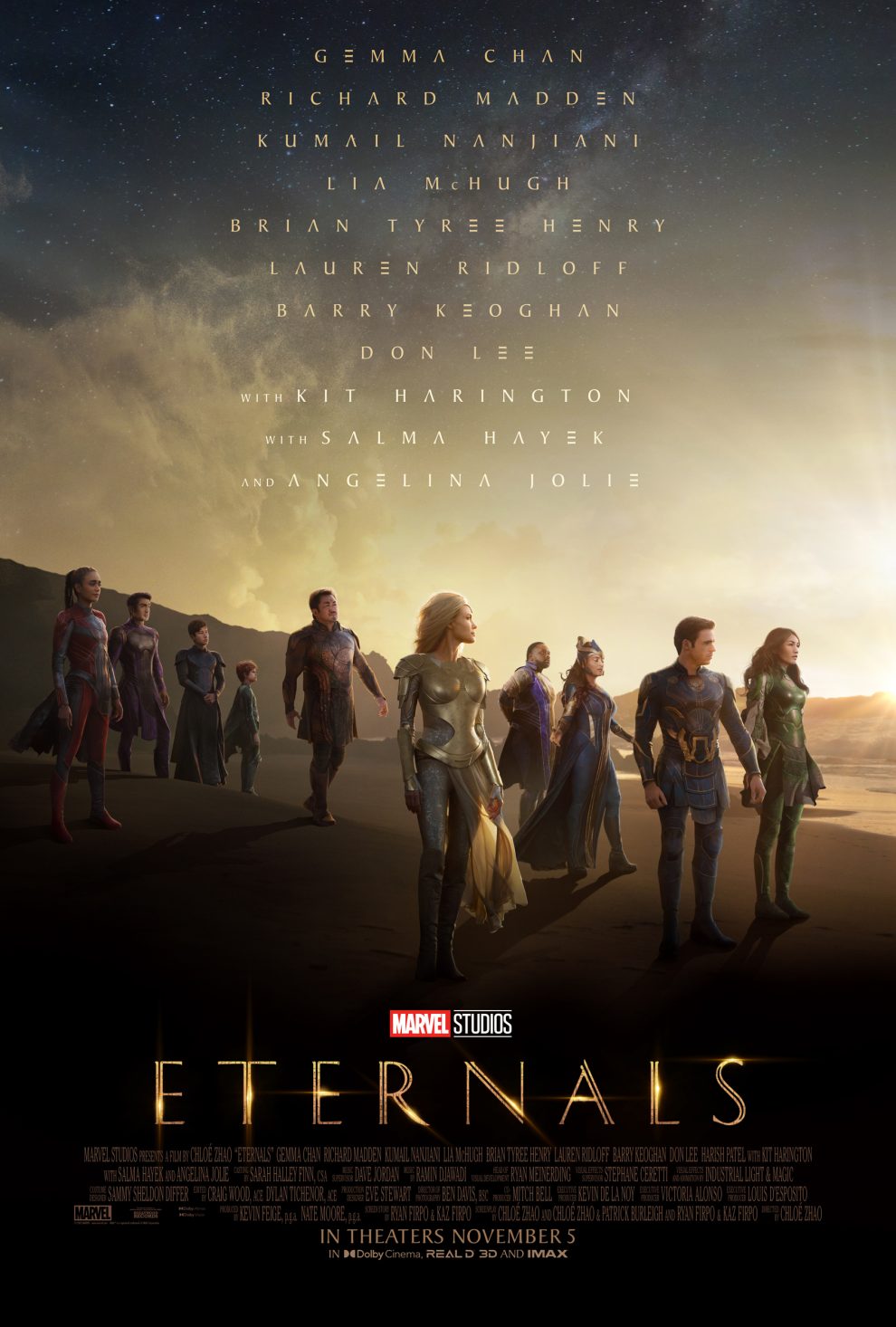 “Eternals” feels like whiplash, but fun whiplash. This film throws the audience into the thick of the action by taking us into a battle and showing us each character’s powers and abilities. This team works in near perfect harmony, defending the world from deviants. As the story progresses we see what the Eternals are really up against, the destruction of the world due to the birth of a celestial. They’ve lived among the people of Earth for thousands of years, leaning into society, growing with it and loving it. Because of this they question their mission, and what should be done about it, if anything. Through this confusion, their individual personalities, their strengths, weaknesses and struggles come to light.

The plot of this movie shines through the action and keeps the audience interested and guessing for the entire 2 hours and 37 minutes run time. However, other things distract from this amazing plot, such as the characters who are funny and lovable, but overall undeveloped, and the large span in time. Because of these large time gaps the audience jumps from point to point with little to no transition.

The audience gets pretty attached to these lovable, funny and unique characters pretty easily, but there’s still a lot of things we don’t know about them by the end. Characters were introduced and then disposed of so quickly it was hard to keep track of who the audience was rooting for and what these heroes were fighting for. This is specifically related to Ajak, played by Salma Hayek, we get little background on who this character is and why we should care about her. Then, after a short period of time, this character is gone. Also there were just so many main characters, Eternals themselves, that it was hard for the audience to remember who was who, and what powers they had. From an outside perspective, it seems like it must’ve been difficult for the creators to dedicate enough screen time to each character so that they could each develop a full story.

However, the characters themselves weren’t the main problem with this movie, the time jumps and quick cuts were. Because of how quickly the movie jumped from scene to scene big questions were left unanswered such as who is Arishem (the big red robot dude)? Where did he come from? Why is he creating and destroying worlds? Avid Marvel comic book fans might know but moviegoers definitely will be confused at best.

Time jumps, unanswered questions and unexplained character arcs made this movie very confusing, but that doesn’t mean it wasn’t also fun and exciting. The action sequences, awesome powers and cool costumes propelled the film. Action sequences, especially the ones set back in time, were very exciting. The settings were beautiful. Specifically, the city of Babylon- complete with lapis lazuli walls and the reconstruction of ancient buildings made the audience feel as if they were right in the middle of the action and made the action more believable.

The Eternals’ powers were well balanced and made these heroes feel more like regular people and in turn more relatable, which helped the audience want to root for them. The stunning alien outfits of the Eternals set them apart and made them shine. Each Eternals’ costume was set to the character and suited them each perfectly through color and style. On the other hand, the costumes of the people from each time period helped set the tone and pace of the film by leaving no room for doubt about the setting of each location and time.

In spite of the confusion and chaos of this film, the characters and plot make it worth the watch. It’s fun, keeps the audience entertained and enthralled in the action and definitely lives up to the normal Marvel standard and expectations.