When James Young’s experience with sleep paralysis inspired him to create a short film, he did not expect that his film would take first place at the 2022 Driftwood Film Festival.

Young’s film, “Deep Sleep,” tells the story of two college students who decide to do a school project on sleep paralysis. In the film, one of the students experiences sleep paralysis herself and hallucinates a scary old woman, except she does not believe that it was a hallucination.

Young, as well as his mom and sister, all have frequent experiences with sleep paralysis in which they hallucinate an old woman or hag. The idea for Young’s short film stemmed from questioning what would happen if this hag was real. The film incorporates elements of suspense and fear based on real life experiences.

Chloe McClare, the film’s producer and editor, recalled how Young’s pitch proposal was selected as the short film for their COM 4025 class to work on. McClare signed on as producer of the film and according to Young, she became “the major driving force behind this project.”

The crew was dedicated to their work, even waking up at 3a.m. to shoot scenes at Ocean Beach. McClare remembered a particularly funny experience when dogs at Dog Beach almost peed on their equipment.

The filmmaking process was a bonding experience for the crew members and talent.

“We all got really close,” McClare said.

Austin Villareal, who played the role of one of the students in the film, said that he had been looking for opportunities to act when he heard about auditions for “Deep Sleep.”

Villareal had a lot of fun working on the project and gained valuable acting experience. In an interview, he shared several anecdotes from working on the film.

“I specifically remember waiting for the director to get everyone ready to film, but she had told me to hold an awkward sleeping position. I still have cricks in my neck from it.”

In between takes, he spent a lot of time watching the crew set up equipment and carefully craft their film.

“Personally…it made me realize that while acting is a vital piece of a good short film, it isn’t its entirety. A great short film cannot be made without a good crew.”

McClare found out that “Deep Sleep” was the winning film in the short film category when she saw the schedule for the 2022 Driftwood film festival, and she quickly informed Young. This was just about 24 hours before the film festival took place.

McClare and Young were shocked at the win.

“There are so many talented individuals doing film in our programs,” Young said.

However, the win also left a feeling of humble pride in the film they created.

“I wasn’t too surprised. I thought the team made a really well crafted short film,” said Villareal.

The successful outcome of the film inspired the crew members and talent to continue pursuing their passion.

“Just getting to enter made me so happy, but winning gives me humble enthusiasm to keep working in this profession,” Young said. 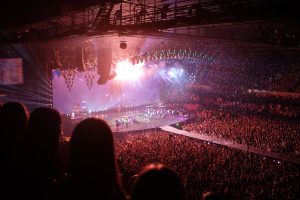