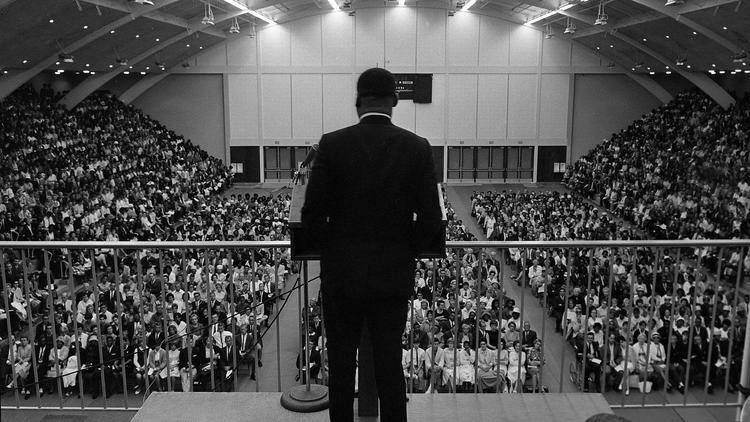 Almost 59 years ago, Martin Luther King Jr. stood in Point Loma Nazarene University’s (formerly Cal Western University’s) Golden Gym and gave a speech titled “Remaining Awake Through a Great Revolution.” Less than a year prior to his visit, Dr. King gave his famous “I Have a Dream” speech in Washington D.C.

Last Tuesday evening, PLNU students and faculty gathered for a candlelight vigil in remembrance of King. They walked from Brown Chapel to Colt Forum while listening to segments from some of King’s famous speeches and were invited to reflect on the civil rights movement’s legacy.

The vigil was hosted by PLNU’s Office of Multicultural and International Student Services (OMISS), and this year’s theme was “Dare to Dream.”

Maya Hood, director of OMISS, chose this title for the 2023 candlelight vigil because she wanted to craft this year’s theme around King’s “I Have a Dream.”

“We are celebrating the 60th anniversary of King’s famous words in Washington D.C. He had a dream for us as a nation to fight for freedom and equality, and to fight against the injustices around us. With his iconic words and teachings in mind, I wanted to create a space for PLNU students, staff, faculty and administrators to come together to dream bigger for ourselves and others and for a better PLNU. My ultimate goal was to provide participants with the opportunity to dream about the meaningful change and practical impacts that we can make as leaders and student leaders on this campus,” Hood said.

Students and faculty were invited to reflect together in the Colt Forum, where they listened to lectures from Montague Williams, professor of Church, Culture, and Society at PLNU, and Walter Augustine, associate vice president for diversity and belonging.

Those in attendance were encouraged by Williams to think about how they can continue to honor King’s legacy by hoping for beloved communities, remaining hungry for justice, engaging in honest dialogue and looking for the things in their life that cultivate happiness.

Hood shared how students could take action to promote racial justice on campus.

“There are many opportunities to learn and engage in this work through attending events and workshops on campus. For example, my office partners with the Center for Justice and Reconciliation to host monthly events called Cup of Culture. The Cup of Culture series is a forum to foster dialogue about diversity, inclusion, justice and reconciliation,” Hood said.

Multicultural Opportunities for Students Actively Involved in Community (MOSAIC) Affinity Groups and study abroad are opportunities where students can learn from diverse perspectives and engage in intercultural dialogue.

Hood encourages students to run for student leadership positions on campus and to find a local church or organization that aligns with their callings.

Hood also had advice for faculty on the campus, reminding them that what she said to the students also applies to staff, faculty and administrators.

“It’s our responsibility to model the various teachings of Martin Luther King Jr. for the students on campus,” Hood said. “One way to learn is to attend this semester’s staff workshops (which are TBD). One way to educate is through personal conversations. I believe this is a powerful way to learn, grow and expand your awareness and knowledge of other people’s lived experiences.”

President of Hui O’Hawaii and one of the OMISS student workers, fourth-year biochem major Miya Rutz, helped plan the vigil.

“I see it as an opportunity for conversation and education, so I really liked that we had different speakers and time for group dialogue. The goal is to get people to engage with the greater PLNU community because a lot of the time we have the same people coming to MOSAIC events and the people who aren’t attending are the ones who probably need it the most,” Rutz said.

“I see this holiday as all about anticipation. It’s like I have one foot in lament for where we are, and one foot in hope for where we could be. It’s great to have a night like tonight where I can take a moment with others who feel the same– that’s the beloved community that [we talked] about,” Rego said.
Visit https://www.plnuasb.com/mosaic to learn more about the ways students can serve on PLNU’s campus.