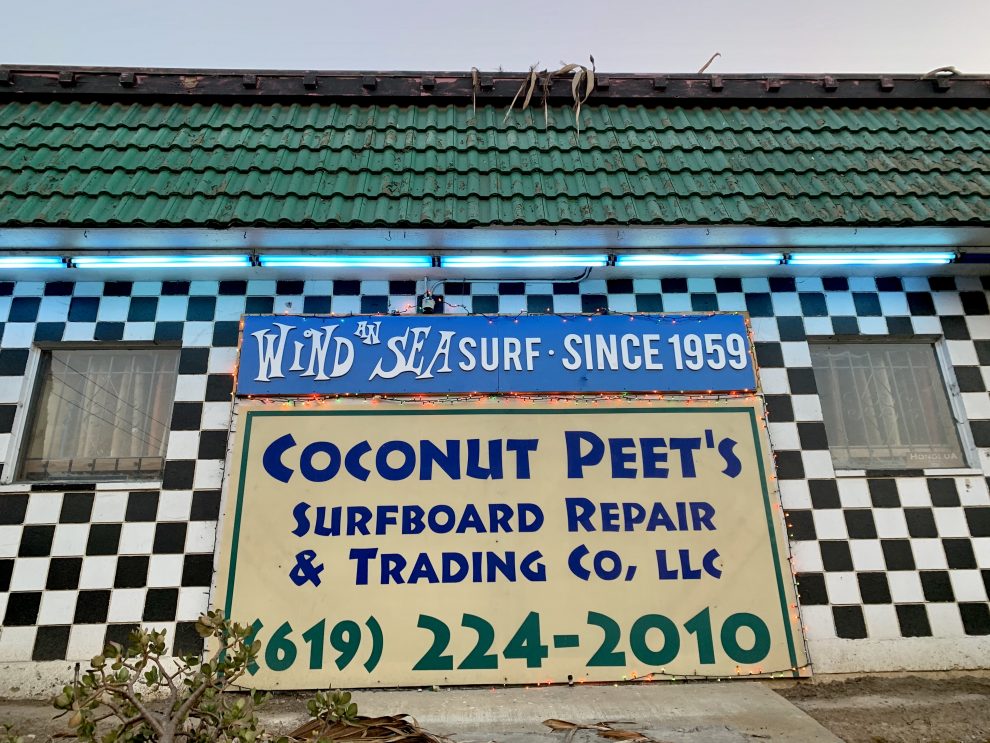 Not only can COVID-19 be deadly for people, but for small businesses as well. Due to California orders limiting the number of people allowed in a store, some local family-owned businesses in Point Loma are starving for customers.

If you’ve ever needed a new surfboard or repair in the Point Loma area, then you’ve probably heard of Coconut Peet’s. Established in May 2009, Coconut Peet’s is a staple in the community and often gets visits from pro surfers. The shop offers board repairs, represents more than 40 different well-known shapers with their board selection and they also do trade-ins. The owner, Billy Burns, has been holding down the shop from the beginning.

When the virus first hit Point Loma, Burns said they moved everything from the inside to the outside. This meant having to purchase expensive tents and an awning to shade products vulnerable to sun damage.

“We had health department officials come through here and tell us we had to change how we run the shop, so if you can’t adapt then you’re out of business.” Burns said. “We never closed because we did a lot of research on the virus and know how retail works which is how we managed.”

Burns’ wife, an ER nurse at Sharp who works with COVID-19 patients, was able to show the staff at Coconut Peet’s how to set everything up outside in order to meet regulations.

“You have to say no to people trying to walk in and it’s appointments only so everything’s changed,” said Burns.

This sudden change has been tough for small businesses trying to stay above water. An employee at Coconut Peet’s, who requested he only be referred to as Kyle, explained how difficult it was to adjust.

“When it first hit, there was a couple months where all us employees got laid off and Billy was running the show himself,” Kyle said.

Kyle said no one was coming in because all the beaches were closed and nobody was surfing, but once the beaches opened up again, things were more or less back to normal. According to Kyle, this was good news for Coconut Peet’s, since their main source of income stems from trading boards and repair.

As for the future of Coconut Peet’s, Burns said it looks like they won’t be able to afford to stay in their current shop. While Burns doesn’t know where they will be moving yet, he said he hopes to remain connected to Point Loma.

“We just plan on being part of the community. The first and foremost thing is be of service to the customers in the area,” Burns said. “Unfortunately, we will be moving out of here in a couple of months, but we plan on being involved in Point Loma as much as possible.”

Max Marvin, a local customer, said Coconut Peet’s has the best deals compared to other surf shops and that Burns is super negotiable.

“They have a good selection of boards and there’s always something affordable in stock. They’re constantly getting new stuff and Billy is really down-to-earth,” Marvin said.

Marvin said it was sad to see what COVID-19 has done to all of the small businesses and locals should do their part by supporting them. According to Marvin, the quality of products are better in the hands of small businesses.

“I’m really disappointed that the local shop is moving, but I’m excited to see what they do with Wind N Sea [their brand] in the future,” Marvin said.

Life-Changing Documentaries
PLNU: Then and Now