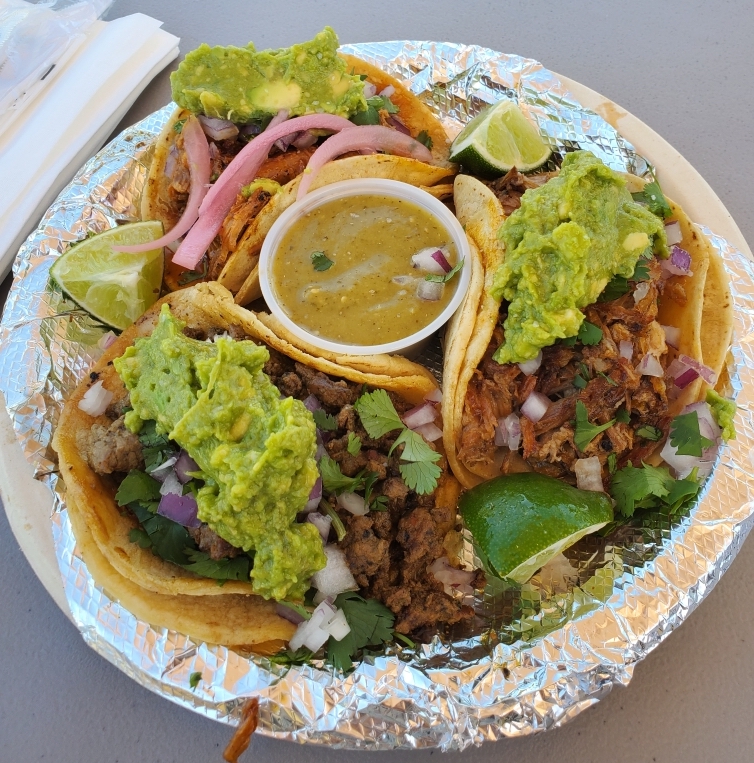 Tucked away just off Clairemont Mesa Boulevard is a little magical parking lot where adults go to escape from the real world for a couple of hours. The side street that allows access to this parking lot, Industry Park Driveway, sounds like a place people have given up on their dream work, and the drab office buildings add to this misconception. But standing out from the rectangular prison, parked in front of Societe Brewing Company, is food truck Fit Tacos, whose name was inspired by healthy Mexican food options. It’s in this parking lot populated with heat lamps, tables and umbrellas where Manuel Yerena opened up his truck for the first time, in a land where dreams go to die, back in July 2020 to fulfill his dream.

Before making the jump to fully committing to the food truck, Yerena and his fiancee Brittney Griffin were working at the restaurant La Puerta and running Yerena’s own business at farmers markets. By his side from the beginning at the farmers markets was Yerena’s childhood friend, Adam Vazquez.

“We used to cook stuff in his house. Roast the salsas and tomatoes in the oven,” Vazquez said.

Business was slow at the farmers markets and when considering committing fully to the food truck, Griffin said her fiance was nervous. Yerena said he feels that the majority of new food businesses will fail. Not to mention, acquiring a food truck and a place to park is no small task, said Griffin.

“Unless you have the backing to buy a spot [to park], the [farmers] market’s an easier in. It’s more affordable to be in the markets, you just pay a flat fee usually so it’s more accessible,” Griffin said.

Going from paying $80 a day to operate in the farmers market and prepping everything in their home kitchen to a full blown food truck is a big jump. But Yerena was happy to move forward toward something.

Years of going to school and working full time.

Years of keeping his head down and working through the hard times.

Yerena’s dream was made possible by Moody’s Food Trucks, which has become the food truck hub of San Diego. According to their website, Moody’s got its start with Grandma Moody selling box lunches out of a car on street corners for $0.25 a pop through the 1920s and ‘30s. Business expanded for the Moody family after WWII when Dennis Moody Sr. bought his first panel truck equipped with hot and cold storage. Dennis Moody III described how this was the moment food trucks as a recognized business practice began.

“Food trucks used to be very different: They didn’t have any cooking equipment in the trucks,” said Moody III, “They called them cold trucks and they would send little vans that were retrofitted with coolers on the back and around the sides. You would make a bunch of sandwiches and drinks and put them in the back of the van and go around and sell them.”

Once the ‘80s hit, gone were the days of meal prep being done in a brick and mortar location. This is when what is known as “hot trucks” became popular in San Diego, the beginning of the current business model of today. Since this advancement to the culinary scene, Moody’s has built up a fleet of around 40 trucks to cater around San Diego. An additional source of income for Moody’s includes selling their old food trucks as they purchase newer models. Those seeking to start a food truck can buy a used one from the ‘80s from Moody’s, then find any other equipment they need for as little as $50,000 — a much more affordable way to run a food business as opposed to a stationary location. But if that’s still too expensive for a potential buyer, there is an option to lease a truck from Moody’s for $6,000 to start and $2,000 a month to keep the lease going.

Moody III said a lot of people looking to own a food truck think their cooking prowess alone will kick off their career. The most important part, however, is often overlooked.

“A lot of newcomers think they’re just going to come and make really good food and just post up somewhere on the sidewalk and be successful and that’s probably not going to be the case,” said Moody III. “So that’s a big part of starting up, figuring out where you’re going to park the truck and serve.”

Securing a contract to park outside of Societe Brewing Company and start making food was what Yerena described as a blessing. The specifics of this blessing, Vazquez revealed, was being lucky enough to have a mutual friend with the company.

“Take things as they come, that’s what I’ve been learning,” Yerena said.

What was coming at the start of his journey was a lot of hardships. As if to add on to the already difficult task of opening a food truck, the pandemic during the summer of 2020 presented a whole new set of challenges. This was a time when venturing out of one’s house was saved only for essential activities. This is what Yerena attributed to the slow start. Looking back, Yerena said he would have told his past self that it’s a difficult journey; neither growth nor business will come overnight, patience is essential.

But he was committed.

Vazquez reminisced on the times when there was no food truck, when they had only a farmers market and a dream.

“We used to be like ‘I can’t wait to get a food truck.’ That used to be the dream. If you can imagine just starting in your backyard, then taking it to the farmers market and now we have a fully functioning kitchen.”

In the early days of owning the food truck, Yerena worked 15-hour days, seven days a week. This would take a toll on anyone, and Yerena was no exception. After a month of non-stop working, doubts started forming in his mind.

How long could he keep this up?

Wouldn’t he be happier if he had an easier job without all the stress?

The way Yerena sees it, the best, and maybe the worst, has yet to come. He’s happy to have a staff he can trust, who give him the opportunity to let his shoulders down a bit. He also acknowledges with seriousness that his business is still young, and he said himself, most food businesses will fail.

But that doesn’t stop him from dreaming.

So, what are the dreams of a food truck owner approaching his one year anniversary of being in operation? Simple.

“Maybe once I get myself to have some kind of financial freedom I’ll be like ‘OK cool, this is what I always wanted, this is what I never had in my life. To be able to have a day off and not have to worry about if I’m going to pay my bills,’” Yerena said.

Along with the desire for financial freedom, a restaurant is the goal Yerena is fixated on. It may not come in a year or even two, but he’s patient and will know when it’s the right time. Until then, he lives out his old dream while striving toward his future.

On a Sunday afternoon, outside of Societe, overlooked by Fit Tacos, beer and Mexican food are plentiful. Conversation, laughter and the ever present sizzle of the flattop mingle in the air with the smell of grilled onions and shrimp. And within his dream on wheels, packed in with three others, Manuel Yerena chops onions with the confidence of a chef who has done this hundreds of times, with the confidence of a man who doesn’t stop chasing his dreams.