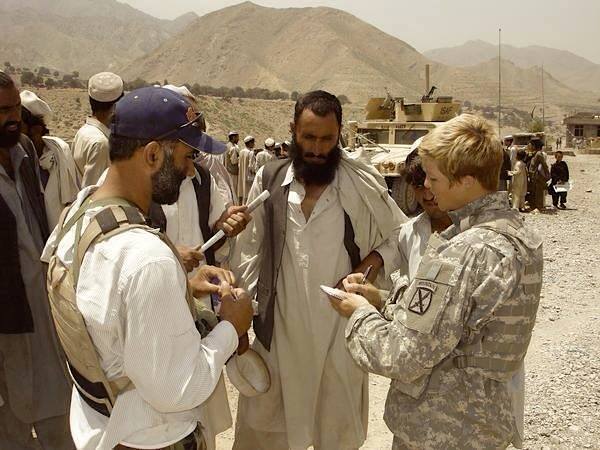 Amber Robinson is a PLNU student and military veteran.

On April 14, President Biden announced American troops will leave Afghanistan on September 11, 2021, exactly two decades after planes hit the twin towers in New York City. On that day, I remember watching the buildings burn, people stumbling in the streets covered in white dust, blood and despair.

At the time, I had no idea I would join the service in 2003. In 2006, I left to go to Afghanistan for the first time. After a year, my unit was extended for an additional four months.

When I got there, I was idealistic. I believed we were helping the Afghan people. I was a photojournalist and traveled with different troop elements to conduct humanitarian missions providing much needed school supplies to girls’ schools, medical care and medications to local villages and groundbreakings for wells, bridges and more schools.

By the end of my third tour, I was jaded and did not want to return to Afghanistan. I grasped the large issue of government corruption. The Taliban had their hands in the government and tribes of every province and village. I learned the money we shelled out to village elders for bridges, wells and schools would often end up in the hands of the Taliban. A sparse amount would be lent to the actual project, the rest smuggled across the border to Pakistan to fund enemy training.

The corruption was frustrating for us all. It felt like we were funding our own demise. It was hard to watch our men and women give their lives and the country remain practically unchanged for all the time we had been there.

During that deployment, we killed Osama Bin Laden. It should be over, right? It was not. Our troops remained in Afghanistan for another decade. My brother, now a soldier, would deploy to Afghanistan three times as well. Now we both suffer with various symptoms of PTSD along with thousands of others who have deployed there.

The war we fight at home can be just as harrowing if not more so than the one we fought overseas. We’ve lost less than 3,000 troops in Afghanistan. But those who succumbed to the war in their mind and died by suicide number in the thousands. According to the U.S. Department of Veteran Affairs, we lose more than 17 veterans a day to suicide in America.

Therefore, when I heard we were finally leaving, my first thought was: “It’s about time.”

Two days later, an old war buddy texted me a news link from the Associated Press. A large girls’ school was bombed in Afghanistan’s capital, Kabul. Dozens of little girls were killed simply because they wanted to get a basic education.

“How do you feel about us leaving?” I asked.

“We can’t leave!” he texted angrily. “Who will protect these kids? Who will help them?”

I remember a little girl named Paramina from a humanitarian mission I covered where we delivered supplies to a girls’ school in Khost Province. Bright eyed and beautiful, she has now most likely forsaken her education and been forced into an arranged marriage. How do you keep your heart from breaking knowing that? Knowing it will get worse when we withdraw?

What will happen to the thousands of local Afghans who worked for us as interpreters for 20 years? Because of their allegiance to allied forces and their belief in a better Afghanistan outside of Taliban control, they put themselves and their families at risk.

Nurullah Aziz, an interpreter who worked with my unit during my first tour, was finally given safe haven in San Diego several years ago through the organization No One Left Behind.

“The Taliban beheaded my brother, just because he worked with the Americans,” said Aziz.

Leaving behind our loyal Afghan supporters is not the only regret my fellow service members and veterans have. As one Marine veteran friend, Savannah Cannon, told me, “I cried when they tore down the base I built with my blood, sweat and tears. What about all my friends who died? Was it all for nothing now?”

What about all the money the U.S. has sunk into the nation? According to a report from the BBC shortly after Biden’s announcement, we have spent $928 billion from when we entered the country in 2001 to 2020. Adversely, the money has to stop flowing sometime, especially when so little headway has been made.

But it’s time to leave Afghanistan. It has been time. Perhaps we could have made headway with a better understanding of the country and resources allocated correctly. But that is not the case.

Our military forces are tired, our money is needed within our own country and we cannot continue to lose lives. We cannot continue to fill our VA waiting rooms with war-worn vets and our graveyards with their suicides. It is time to bring us all home. I will cry as I watch the bases empty. I will cry for those left behind. But I will rejoice that one more war is finally ending.